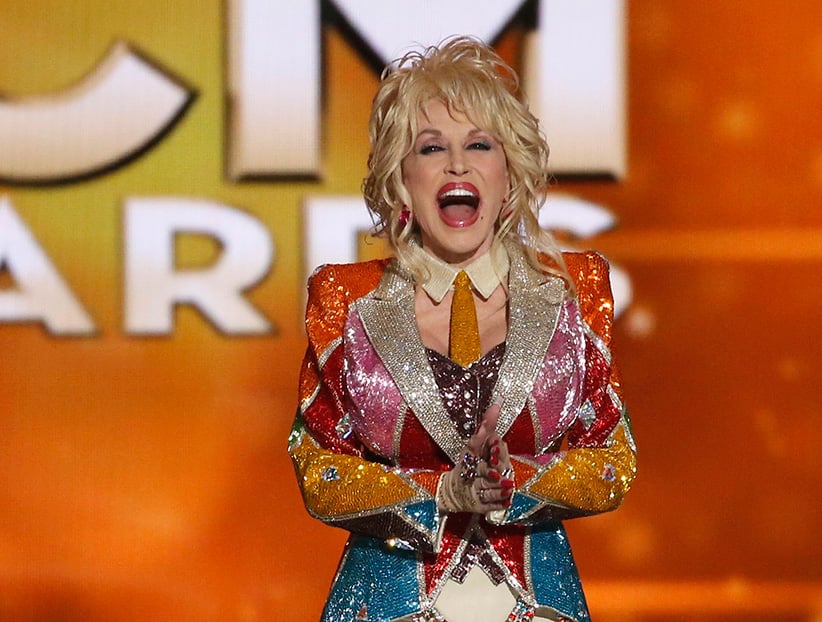 Dolly Parton has just topped the Billboard country charts with her latest album, Pure and Simple. It has been a while since she’s taken the top position—25 years, to be exact, for the 1991 album Eagle When She Flies. Inspired by her 50th anniversary with husband Carl Dean, her newest album speaks to the ups and downs of her marriage, as well as her music career—and the 70-year-old Ms. Parton hopes it may mark the beginning of a Dolly renaissance. Maclean’s interviewed Parton in advance of her September Canadian tour.

Q: Has writing songs about the bond you share with Carl helped you remain in love?

A: It does help. A lot. When I wrote this album I was in that emotional mood of having a wedding, planning a wedding, going back in time and feeling young again. I was thinking about our relationship and how we were when we first got married. I’ve lived a lot since then and gone through a lot of stuff. The music does bring us together and it’s cheaper than therapy!

Q: They say that good music holds a mirror to society and culture. What songs of yours do you think do this best, aside from “9 To 5”?

A: When we did “9 to 5”, that went along with what the times were, with women and equality. [“Down from Dover”] is another one of my very favourite songs that I ever wrote.

Q: It dealt with the whole controversy of sex before marriage in 1970. Loretta Lynn said that a few churches called her song, “The Pill,” an affront to God. Did you have the same experience?

A: They wouldn’t even play it on the radio for that reason at the time. It was too risqué. They called it blasphemous against the spirit. As a songwriter, you can’t worry about being cursed at. You’d never get anything done! The one song on this album that a lot of people are criticizing me for is “Can’t Be That Wrong” — it has a line that goes “anything that feels this right can’t be that wrong.” It’s a cheating song. I wanted to write about every emotion. Cheating love is just as real as un-cheating love.

Q: The lyric in “Can’t Be That Wrong”—”The spirit is always willing / But the flesh is weak again”—could make people think you’ve cheated.

A: When I haven’t been through stuff, I can still write about it because I’ve seen other people go through it. I got criticized for it anyway, though. The one line that I thought was one of the best lines I’ve ever written as a songwriter on that song is “to hell with heaven if it means I lose you.” Obviously I’ve been around a long time and seen a lot of things so I could write whatever I want. I couldn’t believe they could say that! I thought, “Well, to hell with you!”

Q: You’re an artist and an industry. A few artists that approach your success have told me that being in this business is like being married to 20 people. Is that true for you?

A: That’s a good way of putting it. It’s just like how you have to work at a good marriage like Carl and I have for 50 years. I’m very open with my business partners, just like I am with my husband. I’m very upfront and very honest. I don’t let a bunch of stuff fester and boil over. If there’s something bothering me in the business end of things with people I work with, I just say it right out.

Q: I want to ask you about the evolution of country music. Tanya Tucker recently said, “country has progressed but we have no made progress.” Do you think that’s true? She was talking about how there is no differentiation between artists.

A: I think that’s true. There’s a lot of women now with a whole lot of style but they are not necessarily song stylists. Some of their style is a lot like me and a lot of people sound a lot alike — you can’t tell them apart. Loretta’s definitely a stylist. Tanya was a stylist. I really think it all depends what you’re looking for in country music. Personally, I’ve been at it from the beginning. I go back and forth between Pete Williams and Webb Pierce and Porter Wagoner … all the old timers. That can’t be copied.

MORE: A Loretta Lynn for the post-Occupy age

Q: When I think of Kitty Wells banned from playing at the Grand Ole Opry, I think we’ve gone a long way. Do you?

A: I think in that regard we’ve made major progress. I do think there’s gonna always be a group of country people that are always going to love the old traditional sound. The Wagoners, the Johnny Cashes … the people like that who come along. They’re always going to go back and find it. They study it like history. They love it. There’s always going to be that Americana part of music because people love it. Even following my music now … they found the old Dolly stuff and they love that. It makes me feel great.

Q: I read an interview where you talked about your first encounter with glamour. You used to use mercurochrome as lipstick and matchsticks to darken your eyebrows. What has glamour done for you?

A: That’s all true. I made myself up like the town tramp! At the time, it made me feel like more than I was—larger than life. Sometimes makeup and beautiful things can make you feel that way, especially when you don’t have much. While we’re at it, I’m playing the painted lady that I patterned my look after when I was a kid, I’m playing her in this new Christmas movie, The Christmas of Many Colours. I’m playing a part of the town tramp in the movie! Full circle, right? It’s going to be out on Nov. 30. Who better than me to be the town trash, right?

Q: You had that classic song, “Games People Play.” One of the lines from it is “to hell with hate.” What do you think about Blake Shelton’s recently unearthed homophobic and misogynistic tweets?

A: You can’t really make people be any different than what they are. I love everybody. My heart’s open to everybody. We’re all God’s children. I don’t judge. I’m not God. We’re supposed to be less judgmental and accept and be kind and love one another. I embrace everybody for who and what they are. If we can’t be true to ourselves, what can we be true to? We’re phonies if we’re not exactly who we are. I say, “to thine own self be true.”

Q: Oscar Wilde once said, “I didn’t have a life until I went up onstage.” Does that make sense to you?

A: No way. I have a life outside the arenas. The world is my stage. I try to be good at it, whatever part I’m playing — even in my daily life or when the spotlight hits me on the stage to perform — I gotta be alive every second in this world. With or without the applause!

This conversation has been edited and condensed.