An interview with the idiosyncratic, chart-topping British singer who took Glastonbury by storm 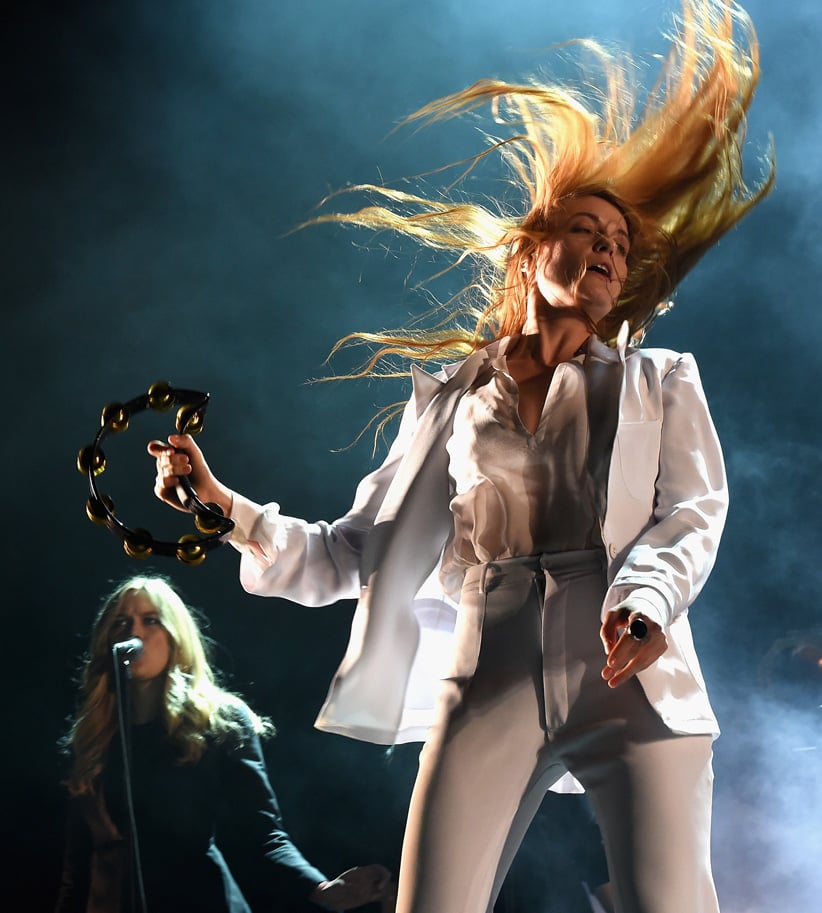 Florence Welch has never been a big believer in convention. As legend has it, the English vocalist of Florence and the Machine cornered her now-manager, Mairead Nash, in a dive bar washroom stall and sang to her until she promised to take Welch on as a client. Welch’s album Lungs (2009), was a chart-topping album of ’70s-tinged pop that mixed harpsichord, guitar, gospel and keyboards and drifted far from the electronic, bass-driven sounds that were and still are dominating the charts.

Rather than look to pop queens of the past for direction, Welch took hippie-driven aesthetic cues from a psychedelic San Francisco-based theatre troupe named the Cockettes and put together a wardrobe that she refers to as a “dragged-up series of pre-Raphaelite paintings.” Over the course of three albums, she has continued along the path less trodden. Her “magnificently wayward choir-girl voice,” as Rolling Stone put it, continues to land Florence and the Machine’s albums at the top of the charts. Her recent performance with the band at Glastonbury won rave reviews and was crowned the hit of the U.K. festival. The band’s latest disc, How Big, How Blue, How Beautiful, chronicles her struggles with depression, her troubled relationships and her obsession with tragedy; days before they began their world tour (they play in Montreal July 31 and Vancouver on Oct. 25), Welch sat down in conversation with Maclean’s.

The music you make is quite sensual but never explicitly sexual. Do you try to keep away from writing lyrics that seem lascivious?

I’ve never written something that I’ve censored—there’s never been a lyric where I thought it was too much. I recently did take my top off [at Coachella this year]. I showed it to my mom and I was like, ‘Look it’s about being strong and owning your feelings!’ I felt naked at this period of my life so it was important to be naked and to own it. She just shook her head.

Does it matter to you if the women you listen to adhere to a feminist regime?

Yes. I definitely consider myself a feminist and it matters. The idea of what a feminist is is changing. I have so many strong women in my life. Throughout making this record I was really supported, consoled and held by the women in my life. My mother is a professor of renaissance history so I spent a lot of time in France as a child. Going to the Duomo and seeing St. Agatha with her breasts cut off was particularly shocking and made a mark. When you have a history of women behind you, you are constantly being floored by something powerful. It’s like waves of truth. It is humbling to listen to strong women and it makes me realize my capacity. I had to go through this as I was making the record. Through advice from other women, I felt like I [gained] more strength.

What drew you to St. Jude, the subject of your first single?

I was on a disastrous break from work and a storm hit the coast of England—they called it St. Jude. The whole song was written about that storm and being in that environment.

Superstition and mythology is a constant in your lyrics. Why?

I grew up reading a lot of Greek mythology and I was very interested in fantasy and ghost stories. I spent a lot of time in an imaginary world, playing games with my brothers and sisters [that were] about being witches and wizards. Persephone cropped up a lot on the new album. The song Delilah is pointing to a Biblical reference. Joan of Arc was sort of the queen bee of the last record.

Who was the Joan of Arc of your current album?

Vali Myers. She’s an Australian artist and she was the muse for [photographer] Ed van der Elsken in the 1950s. She then went on to be this amazing artist and a muse for other artists. She had bright red hair and was said to be able to connect between the dream world and the living world. Her paintings could take up to 10 years. For a while she lived in a cave in Portofino and had a pet fox. A lot of songwriting is the idea that you have to walk between two worlds. You’re creating a mythology around yourself. Although this record is about things that were happening, after it’s done, I reimagined it.

Your last album had a song called No Light, No Light—which aimed to describe the kind of depression you suffer from. Is Ship to Wreck a song about overcoming it?

I had a really confusing time after the touring. You’re just on a constant stream of gigs and you live for the performance and it’s always like the creature you become becomes bigger than the person you are. I had to face a lot of personal chaos and have lived with the consequences of my actions. Ship to Wreck is about wanting this kind of calm— there’s a side of me that’s calm, nurturing and introspective and there’s a side of me that’s destructive. I really wrestle with those two sides. I’m quite a homebody, really, and a creature of habit. I adore making music and doing gigs but in this job one thing you love keeps you away from another thing you love. It’s a Faustian deal you make. So you’re in strange environments all the time. It seems rock and rollers all love routine.

The video for Ship To Wreck was filmed in your home. What was it like to dramatize events and feelings that already happened—and were still happening—to you?

What I was going through was this idea of an odyssey. The depression and heartache were sick little things I was going through and ideas of Dante’s Inferno and purgatory kept coming up. Shooting it in my own house—where so much has happened—was like remaking a real thing and reclaiming it. It was weird. It was an internal battle in that house, and then it became an external battle, with a version of me tearing things up. I kept saying, “What am I doing?”

Are the songs worth all the self-destruction?

For a while, I felt like I was in purgatory—in this weird limbo all the time. The record pieced me back together. The songs about the difficulties and depression actually then became the things that helped me.

You once said that “ideas of beauty should never be typified by gender.” With so much talk about gender fluidity, do you think we are getting to a place where things like transgender people will not be such an issue anymore?

A song from your last disc, called Leave My Body, was about getting what you once described as an out-of-body feeling while performing. Is it hard for you to recapture that?

I was always looking to transcend—I was really obsessed with death, or the idea of escaping the body and trying to not being anything but in my in my own skin. In this record, I really want to connect to life. I want to be here, to experience the moment as it is.

FILED UNDER: Editor's Picks Florence and The Machine Florence Welch