Flower gowns, anyone? These trends are giving floristry new life

International fairs, botanical wearables and a farm-to-table movement are reinvigorating the floral industry 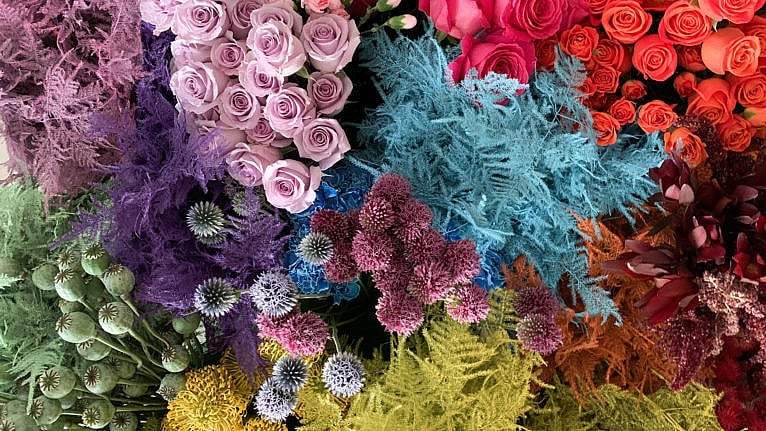 Joezel Yumul is wavering between angel wings and monarch butterfly wings. Angel wings made of masses of white baby’s breath would be more ethereal, but butterfly wings of orange chrysanthemums would be more dramatic—especially considering the wings will be attached to a life-sized mannequin in a ruffled gown also entirely made of fresh flowers. “I’m thinking [of] something really a little bit crazy,” the floral designer tells me by phone from his Toronto studio in early March. Crazy because he wants to top his design from last year, when he worked for 48 hours straight, sticking 1,400 individual stems of statice and blue globe thistle into a frame he’d made out of dollar-store pool noodles. The result was a purple-and-white mermaid gown, along with matching gloves, purse and a picture hat. For the show coming up in May, one challenge will be finding a flower dark enough to stand in for black—he’s thinking dark burgundy hypericum berries. “As much as possible, I don’t want to spray,” he says. “That’s one of the rules in Fleurs de Villes. Before you can spray, you have to ask Tina’s permission.” 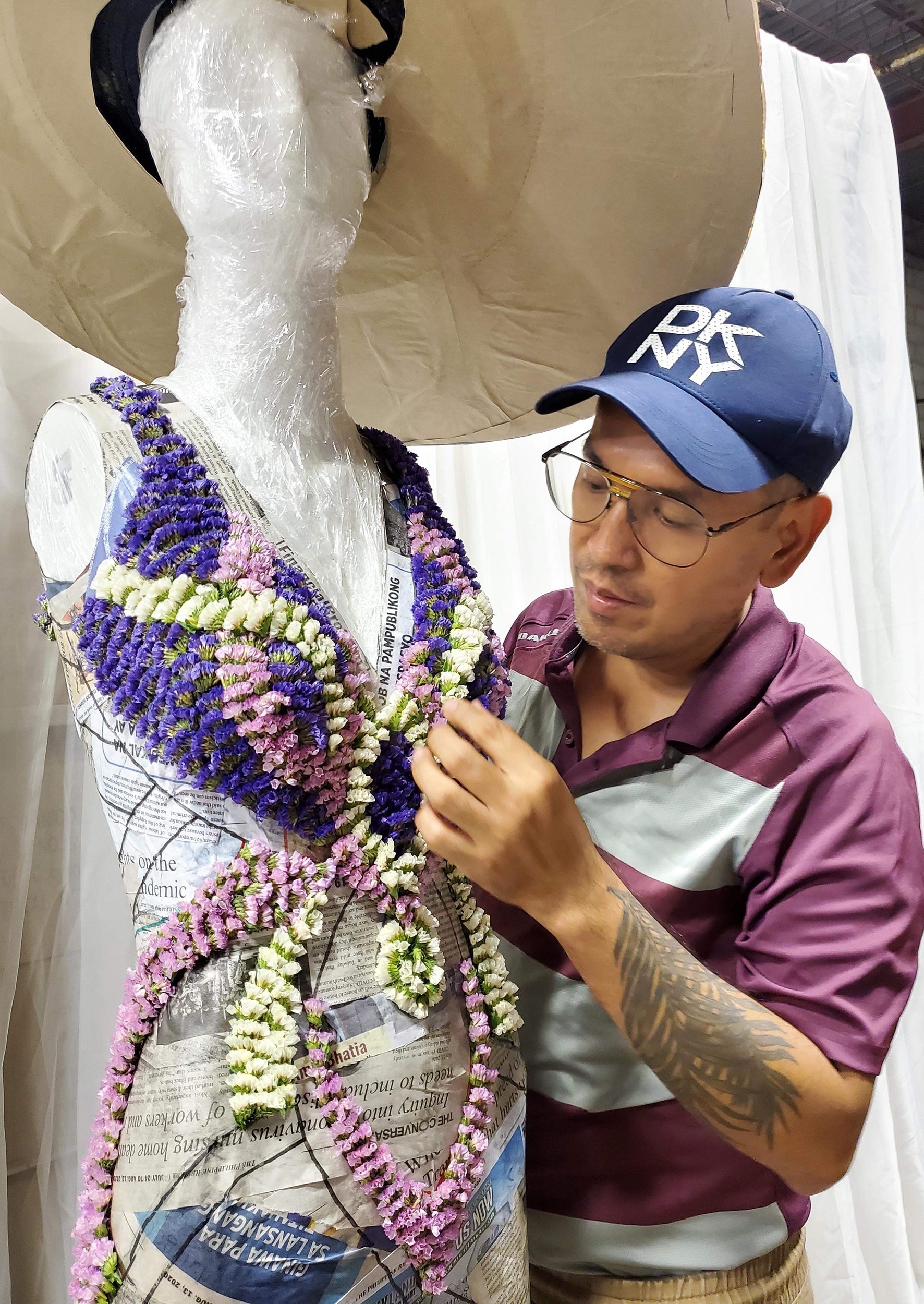 Fleurs de Villes is a Canadian-born floral couture installation showcase that is fast becoming a series of international fairs—it’s doing for flowers what the Fringe Festival did for theatre. “We’ve turned the flower-show model on its head,” says Tina Barkley, who founded the company along with Karen Marshall in 2016. The Vancouver-based marketing professionals sought to apply their know-how to give a boost to the floral designers they loved, beginning with two events on Canada’s West Coast. This year, they are mounting week-long shows in 17 cities—pandemic regulations permitting, they’ll be on the ground to manage the first Fleurs de Villes exhibitions in South Africa and Australia. In each city, Barkley and Marshall select local florists to create outrageous flower installations in partnership with luxury brands. Floral artistry on this scale is usually only seen at the most expensive weddings; Marshall and Barkley’s goal is to bring floral high art into public spaces, including parks, shopping malls and city streets.

Fleurs de Villes is a response, in part, to shifts in consumer behaviour. According to IBISWorld market research, the floristry sector (those retailing cut flowers and flower arrangements) shrank by five per cent between 2015 and 2020. The past decade or so has seen stiff competition for independent florists in Canada; chains like Metro, IGA and Sobeys are able to undercut florists by buying in bulk, and most Canadian consumers now buy their flowers at the supermarket. Plus, industry reports find that millennials prefer to purchase plants over cut flowers, which they perceive as costly and wasteful. The early pandemic was also hard on the industry—cancelled weddings and closed shops meant designers and retailers were out of work.

Award-winning Vancouver florist Vivian Liu has kept track of flower prices in a little notebook for years, and since 2016, she says, prices have gone up by 50 per cent. At first, she hated supermarket flowers for cutting into her business, but over time she realized that when supermarkets take care of standard bouquets, it allows floral artists to focus on specialty designs. “Let the supermarket do their job—we can do our job,” Liu says. 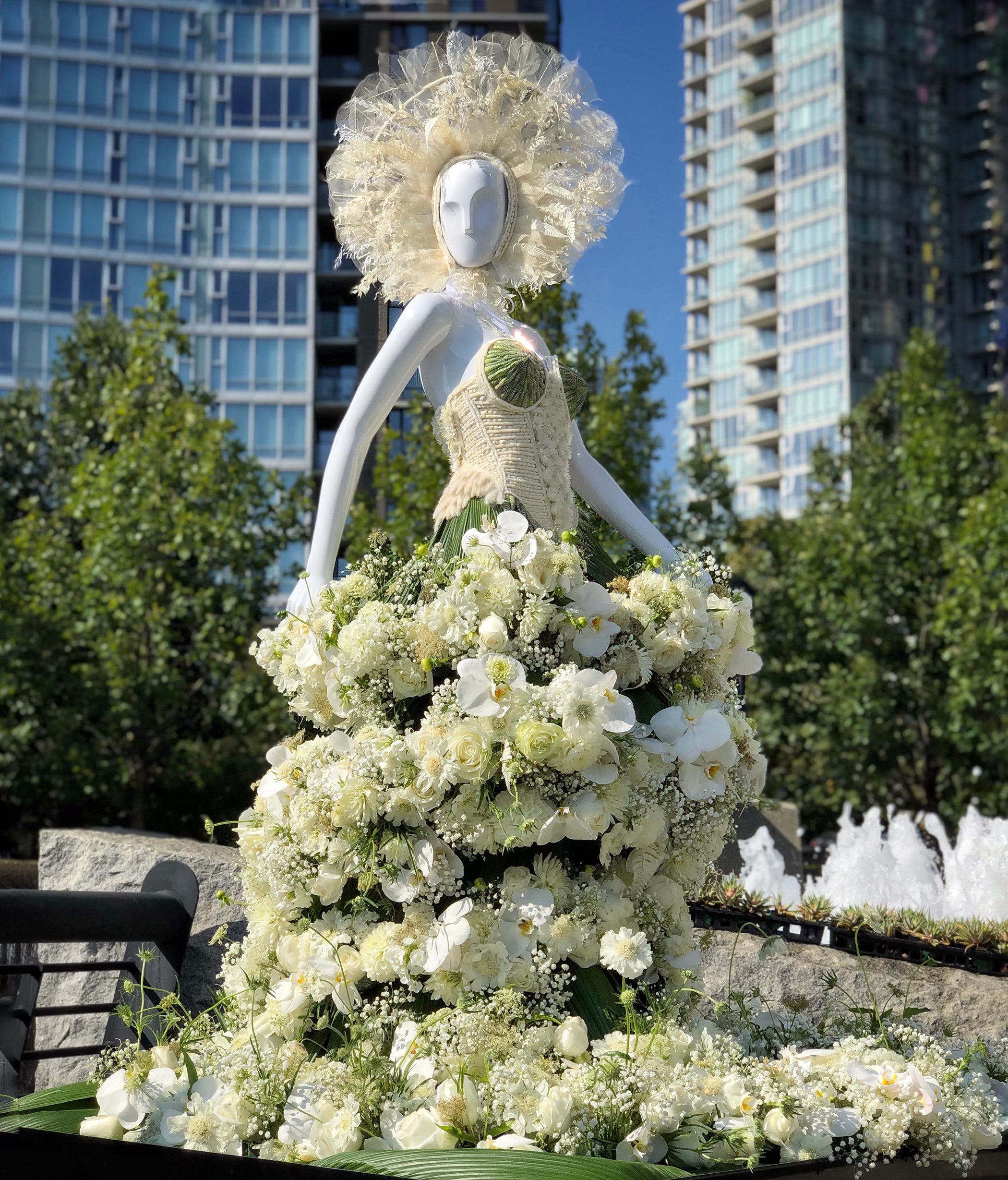 For the Vancouver edition of last year’s Fleurs de Villes, Liu made a Jean Paul Gaultier-inspired dress of white strawflowers with a touch of Madonna—a cone bra of green succulents. Other Liu designs include a towering floral headdress dripping with cymbidium orchids and purple Odessa calla lilies, and hoop earrings swinging with miniature arrangements of marigolds and banyan roots. Liu has yet to receive a customer request for earrings, but botanical wearables may yet catch on. A report from Trend Summit 2020, a Vancouver event drawing floral designers from across the continent, forecast a craze for all manner of necklaces, bracelets and rings, along with shoes and purses constructed out of ferns, mosses and fresh blooms. Forward-thinking florists are giving virtual classes to appeal to the DIY crowd—flower crown workshops are a popular offering.

READ: This geologist found the oldest water on earth—in a Canadian mine

Another major trend hastened by the pandemic is a floriculture farm-to-table movement. Consumers are increasingly interested in local, sustainably grown flowers. The roses you buy at a Calgary supermarket are likely to have been picked four days ago in the highlands of Colombia, stored at near-freezing temperatures and flown through Miami International Airport (where flowers make up 40 per cent of all cargo). By contrast, Sarah Adams runs a cut-flower farm outside Vulcan, Alta.; her small patch is a colourful oasis in the midst of thousands of acres of canola and flax. Adams offers flower subscriptions on the community-supported agriculture model—customers can prepay for next season’s weekly bouquets—and she sold out for 2021 in just one month. “The people who subscribe to these bouquets are becoming more familiar with the possibilities of our growing zone,” Adams says. Tall, stately flowers like foxgloves and hollyhocks may look like they belong in Dutch paintings, but they are hardy southern Alberta flowers. Adams has seen female farmers in particular benefiting from the cut-flower niche. “They’re a powerhouse product,” she says. “Per square foot, if you’re a small-scale farmer, you’re pulling in a good profit from flowers.”

Adams on her farm (Courtesy of Alberta Girl Acres)

Florists have recently been experimenting with creative mechanical solutions to cut down on the use of floral foam. Flowers need water, and the spongy substance traditionally used as a base for larger arrangements works wonders; however, these green bricks are made of highly toxic substances. When Toronto designer Rosalie Villanueva made her first installation for Fleurs de Villes last year, she hid buckets of water under the chicken-wire frame of her creation—a rainbow frame of roses, poppy pods and dyed asparagus ferns for a wooden swing. Unlike wedding decor, which only needs to last for a day, Fleurs de Villes designs need to remain fresh for five days—often under a hot sun. “I was shaking in my boots,” Villanueva says. But she had done her homework, choosing plants that change almost imperceptibly as they transform from fresh to dried.

Villanueva believes younger consumers are willing to pay florist prices—as long as the florist delivers outstanding design. “Millennials and Gen Z, they’re so design-savvy. They’re very aware of what they’re consuming,” she says. For Villanueva, a contemporary look is all about negative space—creating movement and flow rather than the tight bundles of traditional Western arrangements. “Flowers are by far the most difficult thing I’ve worked with as an artist,” says Villanueva, who trained as a painter. “Because they’re dying.” As she pulled down her Fleurs de Villes installation last summer, she handed out flowers to passersby. Part of the painful fascination of the medium is the fleeting nature of each creation—a week of shocking beauty, then a heap of rotting garbage.

This article appears in print in the May 2021 issue of Maclean’s magazine with the headline, “Couture in bud.” Subscribe to the monthly print magazine here.