From a home jammed with art, a trove of buried treasures 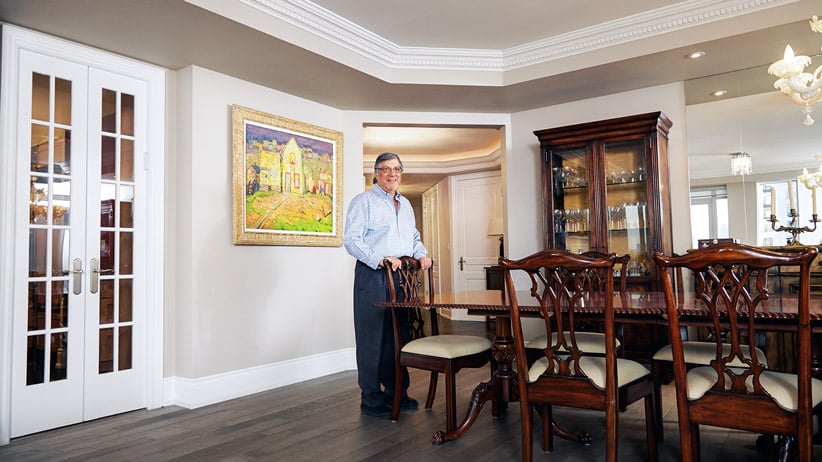 Ephry Merkur, the son of major Group of Seven collectors Max and Reta Mekur, in his house in Toronto. (Photography by Nathan Cyprys)

Janet McNaught’s expectations weren’t high when she was invited to look over a massive art collection at a Toronto home two years ago. As co-owner of Arctic Experience McNaught Gallery in Hamilton, Ont., she’s often contacted by families anxious to know if paintings are originals, especially those from Canada’s Group of Seven. Usually, they are not.

Still, these were works belonging to Toronto developer Max Merkur and his wife, Reta, known for their life’s collection of art and for loaning out pieces to exhibitions at prestigious galleries. Max had died at age 93 in 2007, and when Reta died in 2012, the family was overwhelmed by the sheer volume of artwork and called McNaught. She found their North York family home filled with art; almost every inch of wall space was adorned with paintings, including many of Reta’s own Jackson Pollock-esque abstracts.

Then, a revelation: “They said, ‘Come downstairs.’ They unlocked the door of this basement room.” Inside was a buried treasure, including a collection of sketches by Group of Seven co-founder J.E.H. MacDonald (1873-1932), all but forgotten for 40 years. “The shelves were falling down; we’d forgotten what was there,” their son, Ephry Merkur, 72, says. “All through the house there were rooms jammed with art. Some weren’t worth anything, but we didn’t know where to start. We even found a bag of jewellery under one of the tables in the basement room.”

That discovery, in 2012, led to the donation of 10 rare MacDonald paintings that were unveiled at the Vancouver Art Gallery (VAG) this week. The pieces are worth between $5 million and $10 million, and they are the first of 18 MacDonald pieces to be presented to the gallery by Ephry and his brother Melvin.

Ironically, it was the discovery of another Group of Seven piece in the collection, by Lawren Harris, that brought the paintings to Vancouver. In seeking to date that painting, McNaught went to the VAG last spring and met with curator Ian Thom, one of Canada’s foremost experts on the subject. Intrigued by her tale of the MacDonald pieces, Thom went to Toronto, and was thrilled to see original studies for works such as The Wild River, The Tangled Garden, The Lonely North, Mist Fantasy and Leaves in the Brook. “It’s very exciting to see things no other art historian has seen before,” Thom enthused. “I knew they were very special.” The stash of MacDonald pieces traces to the early ’70s, when Max met with MacDonald’s son, Thoreau, a friend. Ostensibly, it was to talk about buying Thoreau’s father’s home in Thornhill, Ont., now a historic site, but the talk quickly turned to art. The Group of Seven’s style was to hike into the wilderness with paint boxes and daub and sketch onto 8 x 10½-inch panels. Those sketches became the basis for studio perspectives and, from there, larger canvases, and Thoreau had a bounty of his father’s preparatory paintings.

In fact, some 40 years earlier, he and his father had wrapped the pieces in tar paper and cellophane, boxed them and and buried them in the backyard to preserve them. Thoreau, now single and childless and keen to ensure his father’s legacy, sold them to Max for $35 each. “At the time,” said McNaught, “they had little monetary value.”

Max, who developed swaths of Toronto through the 1950s, ’60s and ’70s, was a businessman, and the pieces appreciated over time. But art was also a lifelong constant at the Merkurs’ home, recalls Ephry’s son, Darcy, a Toronto lawyer: “A.J. Casson was at my bar mitzvah and gave me a wonderful painting as a gift. I remember going to his house for coffee.” “Dad was friends with so many artists,” laughs Ephry, an avid art, stamp and comic book collector. “My earliest memories are going to look at properties and then to buy art.”

The pieces in the collection “are astounding,” says McNaught, who is sorting the lot for sale, retention or donation. “They bring a tear to my eye.” Her gallery has also catalogued hundreds of documents offering insight into the formation of the Group, and their discussions. “I’m grateful my parents’ memory will live on,” Ephry says.