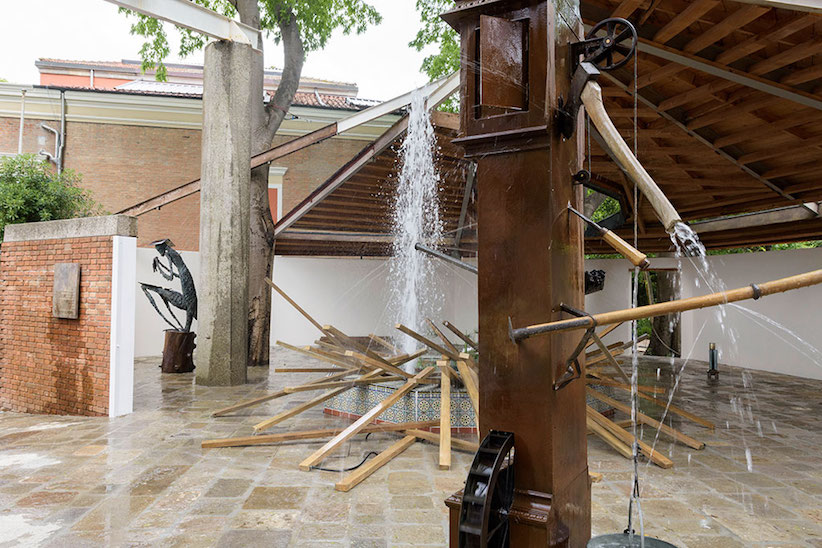 Geoffrey Farmer, A way out of the mirror, 2017. Installation view at the Canada Pavilion for the 57th International Art Exhibition – la Biennale di Venezia, 2017. © Geoffrey Farmer, Courtesy of the artist. (Francesco Barasciutti)

In 16th- and 17th-century Europe, amusing water features known as jeux d’eau became features of European Mannerist and Baroque gardens. For the sprawling grounds of his Hellbrunn Palace in Austria, Markus Sittich von Hohenems, the Prince-Archbishop of Salzburg, commissioned a series of pranks including a stone dining table through which conduits artfully shot surprise sprays on unsuspecting guests, startling their senses and transforming their environment.

About two years ago, after the Vancouver-born artist Geoffrey Farmer was chosen to represent Canada at the Venice Biennale, the prestigious international contemporary art exhibition that opens this week, he made a visit to the Giardini, the city’s east-end garden that has housed the international fair since 1895. A vision of a jeux d’eau came to his mind. At first when he looked at the Canadian pavilion, where his Venice project would be installed, says Farmer, “A palm tree came to mind. Then I realized that it wasn’t a palm tree, it was a 30-foot geyser.”

This was the genesis for the most complex, inventive, and exciting Canadian project to be unveiled at the Biennale in years: a courtyard of sculptures that are biographically based and aquatically infused. As the 49-year-old Farmer explains, “Water is universal, permeable, and in constant movement. I wanted that to be flowing through my installation and bringing it to life.”

The Biennale commission is a significant one for Farmer. Over the next months (the fair runs until November) an expected 500,000 visitors will arrive at the Giardini to view exhibits by the leading artists from more than 80 nations. While Farmer is already internationally renowned, he is best known for constructions of collage and works such as his epic paper composition Leaves of Grass, which received much fanfare in 2012 at Documenta, a 100-day-long international art exhibition held every five years in Kassel, Germany. The installation was comprised of an assembly of paper-doll-like objects—each one a figurine composed from cut-and-pasted images from Life—that the artist mounted to dried grass sticks so viewers could see magazines, as well as the wider world, in what he described as “a new, liberated way.”

Now Farmer has moved to a much more challenging medium. Not only is he presenting a diverse range of cast-metal works for the first time in his career—each one with a unique size, function, and meaning—but he has also created a visionary space to showcase his creations. “Although Geoffrey has made performative assemblage sculpture before,” explains Kitty Scott, both the project’s curator and the Art Gallery of Ontario’s curator of contemporary art, “he has never done so on such an emotional register at this monumental scale. Bronze too is a new material for him.”

In order to create a stage for his waterworks, the artist completely transformed the Canadian pavilion, where this country’s artists have shown their work at the Venice fair since 1952, removing its walls entirely, and the roof except for its beams, leaving only the skeleton of the original structure. (In large measure this was possible because the pavilion is slated for a major restoration once the Biennale closes.) Farmer also lifted the building’s 70-year-old terrazzo floor and laid down an Italian stone that remains beautiful when wet, and is sufficiently toothed to offer visitors a slip-free surface to walk on. With no protection from the elements, the space once occupied by the Canadian pavilion has been transformed into a piazza, filled with an installation of sculptures. The backdrop of the new courtyard is a majestic view of Venice’s serene lagoon and buildings in the distance, hidden from view until Farmer took down the pavilion’s walls.

Farmer found the narrative for his compendium of fountains when his sister showed him two black-and-white press photographs from 1955 that she found in their parents’ basement. The pictures were of his grandfather’s truck, demolished after a collision with a train. Lumber, which had been piled in the back of the vehicle, was spread along the track; a fallen crossing sign rests on the truck’s hood.

Not only were the images visually compelling to Farmer, they unlocked a family mystery. The artist knew nothing about his grandfather “because my father never spoke about him or the incident,” he says. Yet somehow he sensed that the accident had changed his family’s trajectory. During the harrowing crash, his grandfather’s chest slammed against the steering wheel, the probable cause of a massive fatal heart attack a few months later. Soon after, Farmer’s father went to work at a young age to help support his family. He carried the event with him throughout his life, passing it on to Farmer, the artist says, “through his silence.”

Drawing on the imagery in the photos, Farmer created two-by-fours in brass, 71 in total, made to represent the lumber beams that he counted in the pictures of his grandfather’s demolished truck. He designed each cast plank as a fountain, so that they all spray water, and then strewed them deliberately about the courtyard. “They evoke the collision, one that replicates the one that set his family on a course which created an intergenerational trauma,” explains Scott.

The central component of Farmer’s project is also biographical: an amalgamation of two water features that have been merged together: one modeled after the Moorish-tiled fountain at the San Francisco Institute of Art where Farmer went to school in 1991. Collaged to it is a duplication of the fountain in New York’s Washington Square Park, which shoots upward. San Francisco was central to Farmer’s coming of age. It was where he was taught by Kathy Acker, first heard the music of John Cage, was exposed to gay culture, and became deeply familiar with Allen Ginsburg, whose famous poem “Howl” was written in 1955, the year of his grandfather’s accident.

In homage to both the beat poet and his own family, Farmer has titled his Venice installation a way out of the mirror, which is a line from Allen Ginsberg’s poem, “Laughing Gas,” published in the collection Kaddish and Other Poems (1958-1960). To underscore this dual reference, a brass plaque, about the size of a page, bearing the text of a page from Ginsberg’s poem Kaddish (named for the Jewish mourning prayer) sits on the front of the Canadian pavilion. Ginsburg wrote the verse in 1956 after the death of his mother, Naomi, following a long mental illness. Farmer has constructed the work so that droplets of water emerge and trickle: a weeping poem.

Also in the courtyard is a bronze statue of a disproportionately large praying mantis based on one of Farmer’s favorite works, the expressionistically rendered La Mante, grande by the prominent twentieth-century French sculptor Germaine Richier, who created a frightening, aggressive insect that takes the form of a human pose. In Farmer’s version, the praying mantis wears one open book on his head and holds another in its arms, which drip with water. Says Farmer, the work is a portrait of himself as a teenager: “a period that we have all gone through when the body is so awkwardly transforming.”

A pair of scissors that are lodged in the insect’s back is also part of Farmer’s praying mantis monument—a twin reference to the artist’s cut-and-paste work with collage and a connection to one of the installation’s other central pieces: a 13-foot-tall kinetic bronze sculpture called “The Wounded Man” which takes the form of a large grandfather clock. The sculpture is deceptively playful as water empties from it into a bucket and steam comes out of its top, akin to a Chitty-Chitty-Bang-Bang contraption. Yet the work is far from child’s play: weapons, including an axe and a spike, are cleaved into the timepiece.

“It’s a portrait of my grandfather, my father, and myself,” says Farmer, who found inspiration for the work in 16th-century medical illustration that aided surgeons in treating every form of bodily injury. “You can look at the Wounded Man, stabbed by all the instruments, and it is a site of trauma,” explains Scott, “but also an identification with the AIDS body which was an inherent part of Geoffrey’s life in San Francisco.”

There are playful elements of sculpture in the courtyard, including a life-sized duvet cast in aluminum as well as a small fountain that takes the shape of a turtle. As well, more recent components of Famer’s biography also comprise his Venice project. In 2015, after Peter Pitseolak High School in Cape Dorset was destroyed by fire, the artist travelled to Nunavut to help its students rebuild their library. He returned with pieces of metal rebar from the burnt-down building given to him by the community at his request. In Venice, Farmer placed them in a sculptural vessel modeled after an animal trough, an act he describes in the days leading up to Biennale’s opening as “an empathetic understanding and bridge to other stories that aren’t mine but that we as a nation must look at.”

Farmer makes it clear that his impetus to deconstruct the Canadian pavilion came from one more such story. Plans for the building, designed by a Milanese architectural firm BBPR, as part of Italy’s Second World War reparations to Canada, commenced in 1955 (yet another association with the timing of Farmer’s grandfather’s accident). In the decade before the building’s construction, two of the firms’ members were detained in labour camps because of their anti-Fascist resistance, with a fatal outcome for one of the pair. Farmer pays tribute to its architects and their history of loss by keeping the building’s framework but presenting it in a new light.

This reverence is a critical component of Farmer’s Venice installation. When asked about taking on the role to represent Canada in the year of the country’s 150th anniversary (also the year he’ll turn 50) he replied that the honour “came with responsibility that you don’t take on easily.” Whereas with Leaves of Grass Farmer dismantled and reorganized pages from Life to liberate images into a new three-dimensional form, at the Biennale, he takes his cue from personal tragedy to breathe life into a commentary on humanity, and his country as well.

For decades the Canadian pavilion in the Venice Giardini has felt dwarfed and awkward, located between the Teutonic-columned German pavilion and the stately Neo-classical British pavilion. It has been described disparagingly as too small, and as a wigwam-like structure unsuitable to presenting art. But Farmer’s re-conception of the space fits the zeitgeist of our nation, its ethos of openness and welcome. As for his sculptures inside it, like the timeless symbol of fountains, they offer a narrative of joy and sorrow, laughter and weeping; a celebration of Canada and one of its most thoughtful artists at a particularly important moment in time. 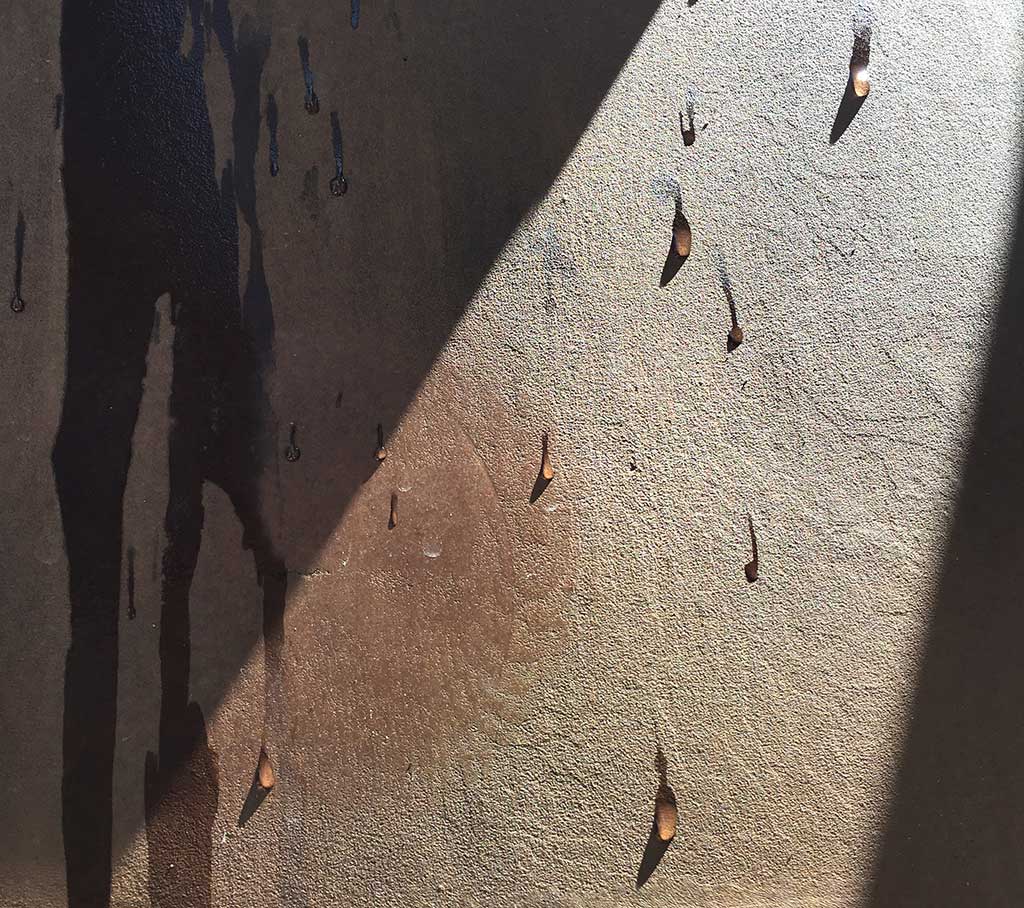 Geoffrey Farmer, Kunstgiesserei, St.Gallen, 2017. A way out of the mirror, 2017. Work in progress for the Canada Pavilion for the 57th International Art Exhibition – la Biennale di Venezia, 2017.