Kendrick Lamar won the battle, but didn't win the war. Music's big night rejected hip-hop once more, and marked it as an outsider again 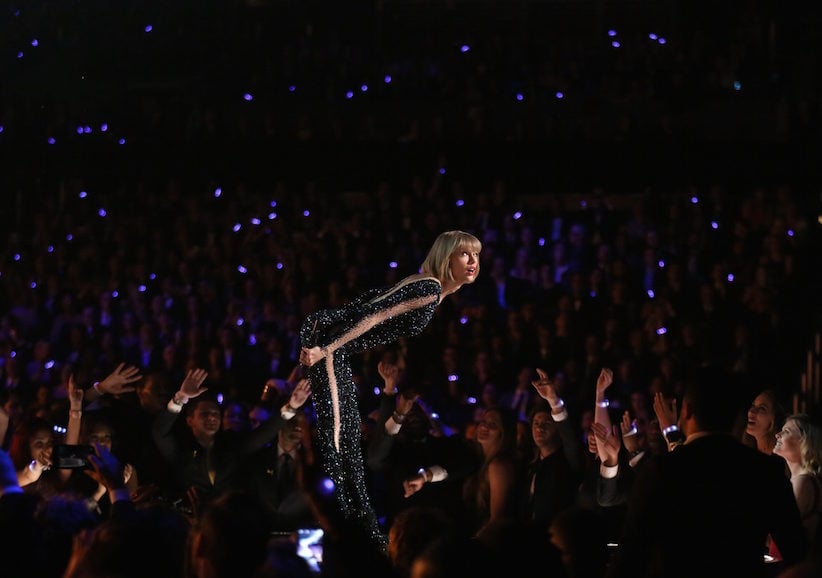 That declaration, which opened the 58th annual Grammy Awards on Monday night, felt strange; her album 1989, named after the year she was born, was released nearly two full years ago, an oddity of the Grammys’ unusual eligibility period. (She was even nominated in three categories last year, too, because the single “Shake It Off” managed to be released in time.) But her words that this was a different calendar year would prove to be an odious portent for an awards night that hinted at reform and renewal, and instead applied another layer of protective lacquer onto its status quo.

1989, after all, was the year that the Grammys first decided to acknowledge rap music existed, creating a category for Best Rap Performance a full decade after hip-hop’s first appearance on wax with “Rapper’s Delight.” That year, prominent rappers—including DJ Jazzy Jeff and Will “the Fresh Prince” Smith, who went on to win with their appropriately titled “Parents Just Don’t Understand”—boycotted the ceremony because the award presentation wouldn’t be televised.

Twenty-seven years later, here were the Grammys still, revelling in all its contradictions. On the same night that the Academy president made a condescending speech about the value of art, essentially slamming its streaming-services lifeline in the process—before, morbidly, playing a video reel honouring musicians who passed away, a horribly mawkish warning about the death of music—it awarded Album of the Year to a two-year-old album, the greatest strength of which was its obscene unit-selling populism. And on the same night where rapper-turned-regular-Grammy-host LL Cool J went to great lengths to pay tribute to hip-hop icons—”With all that divides us today, our shared love of music unites us,” he said—the Academy shut the gates once again, allowing Kendrick Lamar to give the evening’s most indelible performance, and to take home a night-leading five Grammys out of his 11 nominations, but none in the prestige categories. He won the battle, but not the war.

This was not going to be hip-hop’s Grammy moment. It’s a very familiar feeling. 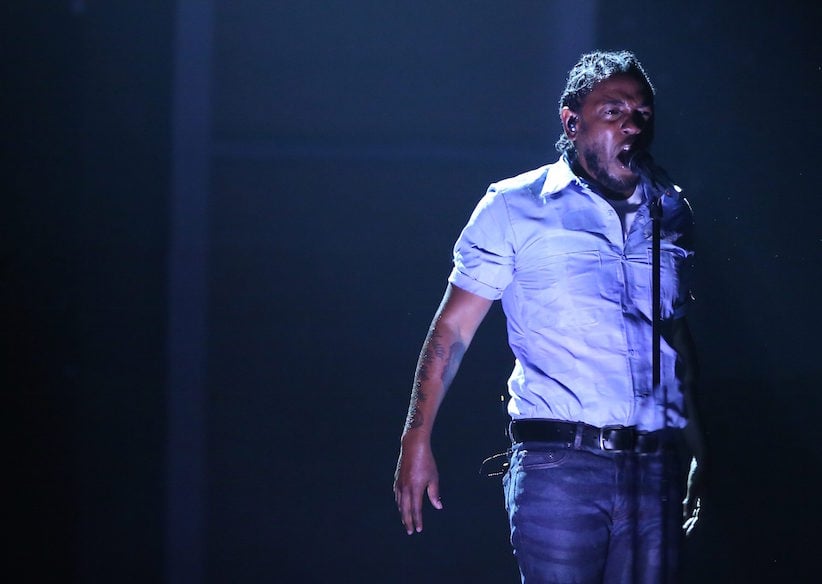 Despite its dominance in our popular culture, from music and beyond, the Washington Post found that of the 81 winners of the prestige general categories—song, album and record of the year—since 1989, just 1.2 per cent of the winners were hip-hop. (I would disagree with the assessment that the 1999 album of the year The Miseducation of Lauryn Hill isn’t hip-hop, but that would just bump the number up to 2.5 per cent, which really just proves the point.) And 8.1 per cent of the nominations were hip-hop songs.

Lamar did his part. He proved that he’s one of music’s most essential figures, giving a searing, man-possessed performance of “Alright” and “The Blacker the Berry” while hauling America’s original sin of slavery to the cultural forefront, and naming the date of Trayvon Martin’s death as the day “I lost my life, too.” And five Grammys is surely nothing to sniff at.

But the truly big achievement—a win in the Best Album or Best Record categories in which he was nominated—wasn’t meant to be. It should have been obvious when Lamar’s Black Lives Matter anthem “Alright” lost song of the year to Ed Sheeran and his Grammy-bait ballad “Thinking Out Loud.”

It’s hard to reconcile the fact that the same Academy who gave 2015’s album of the year to Beck, whose Morning Phase was championed over Beyoncé’s self-titled album on the basis of “artistic merit,” would brazenly go and recognize Taylor Swift this year, for an album was pop in its true form. It’s what makes To Pimp A Butterfly‘s loss all the more painful—it is a perfect-storm album that went platinum, is a critical darling, and is a force for social change, made by an artist who took the awards seriously. He played by the rules. He had an ideal album for the Academy’s riven camps. Seeing the album lose makes it hard to imagine what rap record could take this category ever again.

Related: From Kendrick to Kanye, rap gods dig into their faith

Meanwhile, Taylor Swift’s victory speech feted the breaking of a somewhat niche kind of glass ceiling—she exulted that she was the first female solo act to win Album of the Year twice, but then again, only three male solo acts have won it twice, and four women have at least two Album of the Year credits to their name—while a black rapper heralding a vital social message was snubbed. Last year, Beyoncé was assailed for not being a “true artist” because she didn’t write her own songs; this year, Swift brought her committee of producers onto the stage and outed her main sonic collaborator, Max Martin. There will likely be little questioning of her artistic bona fides anyway. 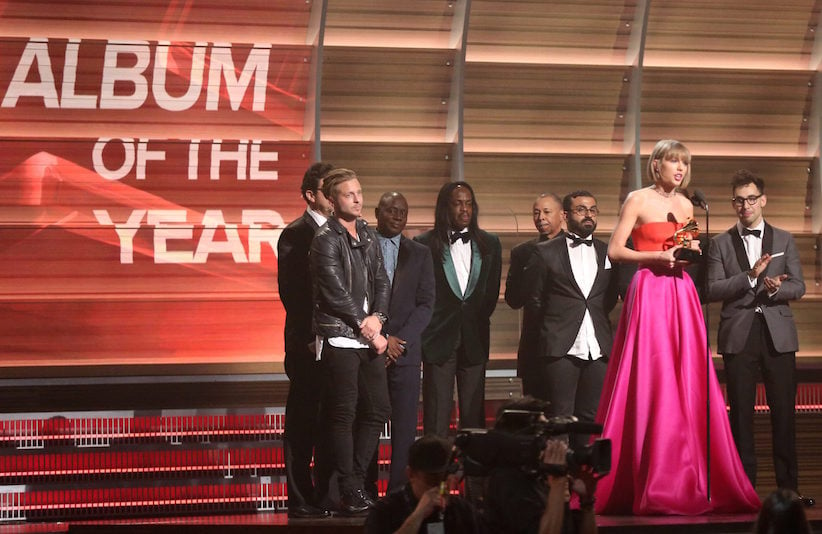 Taylor Swift, second from right, accepts the award for album of the year for “1989” at the 58th annual Grammy Awards on Monday, Feb. 15, 2016, in Los Angeles. (Photo by Matt Sayles/Invision/AP)

Something feels infuriating and revealing about Swift’s win and Lamar’s loss: It highlighted what it means to be an insider. “When it comes down to actual voting, it’s not just about the music,” a Grammy voter told Billboard. “Taylor stands up for causes that matter to artists and songwriters—and an important part of the Grammys is advocacy. When you show up at events to support what the Recording Academy does, that goes a long way with voters.” The fact that her bestselling album helped buoy the hard-luck industry, and her stand against that grim streaming spectre when she rejected Apple Music, were not forgotten. It’s a strong album, to be certain, but 1989‘s win at least feels like a reward from insiders—and was a vision of who the Academy sees as outsiders.

It begs us to ask what the point of these awards show even are. Only eight awards were actually presented in Monday’s tedious televised affair. At their core, they are fun, frivolous exercises in industry-insider congratulation. That does, of course, have a place—even a necessary one. But as it becomes clearer to media and the masses that art, and its consumption, is fundamentally an act of representation, it’s not enough to just self-congratulate. Instead, when you consistently leave out groups of people and entire genres out of the night’s top honours, that back-slapping reads as a gleeful maintenance of the status quo—as it should, because it’s exactly what it is.

That makes it hard to watch an awards show that, as its various presenters repeatedly urged, celebrated music and its magical moments. The Grammys become a frustrating night presenting a fantastical fiction, of an industry operating in a place immune to both fan voices and the free marketplace, where pop somehow isn’t populist, where you’re rewarded for doing what you’re supposed to do, lobbying the right people, and staying in your lane. It’s an award show where its president will acknowledge that popular music is rooted in black culture, but based on its awards, won’t allow that black music is culturally important. If art is representation, art awards are quickly becoming judges of who gets to play and who doesn’t—and, most infuriatingly, doing so amid pomp and revelry.

It was Nina Simone, after all, who said that it is an artist’s duty to reflect the times. The Grammys talk a big game about that duty, too. And yet they will exclude the man who spent Monday night proving just how deeply he reflected them, and instead reward the person whose two-year-old album celebrates the halcyon 1980s. More than it has in the last few years, it felt out of touch because it got so tantalizingly close. So maybe it’s time to stop hoping for an awakening. Maybe it’s too infuriating to see these awards rub its contradictions in our faces. Maybe it’s time to just give up on the Grammys.

As crowds filed out of the Staples Center, shameless yawper Pitbull sang a remix of famed dancehall jam “Murder She Wrote” surrounded by women dressed like taxis before teaming up with professional sleazebag Robin Thicke, who has abandoned his absolution shtick, and tattooed rubboard Travis Barker. It was all a little bit Mad Max, like it was the first musical performance after doomsday. No one asked for this. And in that way, this performance felt apt.