How BadBadNotGood's low-key vibe turned them into musical crown princes 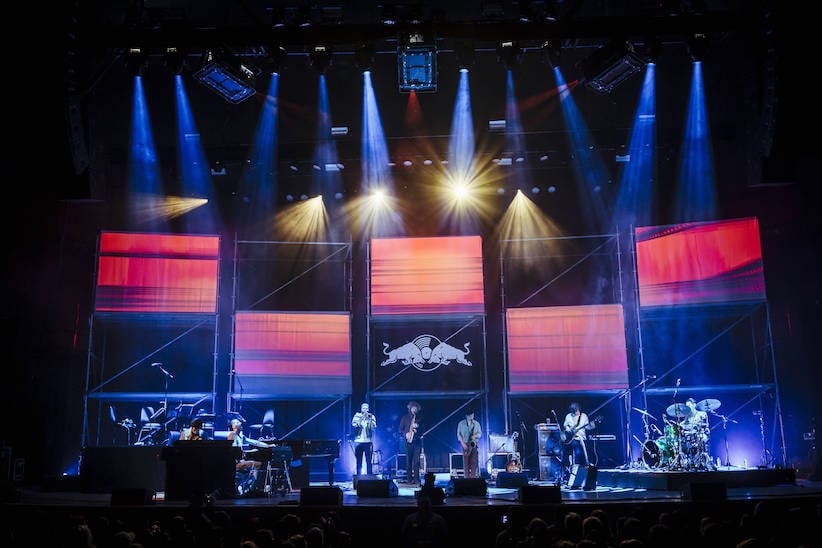 Finding BadBadNotGood can be something of a challenge. It’s a warm, dusky October night in Toronto, the kind of night that the fast-rising four-piece band’s moody, rowdy, mutant-Morricone jazz/hip-hop/soul interpolations are made for, where the city is made sleek under ragged sleeves of orange and purple. And on this night, somewhere in Toronto, they’re rehearsing for a big showcase in iconic Massey Hall, as part of Red Bull’s Sound Select 3 Days in Toronto concert series.

They’re in a studio inside one of so many gashapon buildings in Toronto’s once-lunchpail Davenport neighbourhood, I’m told: you have to crack a building open to know if it’s a hollowed-out former packing plant, or a warehouse, or a rehearsal space, or a hip bar/arcade or, say, some white-walled start-up’s office under active renovation where a trio of impatient window repairmen brusquely urge you to leave in Portuguese, despite your protestations that you’re just looking for a band you’re trying to geolocate through the sounds snaking through the building’s grates and doors.

They’re rarely home these days, too: The Toronto show comes in the midst of a hectic world tour that has taken them to far-flung places, from Argentina to London and to festivals in Norway and the Netherlands, playing at least five shows a month since April.

And even if they stepped outside, the band might blend in all the same: the four twenty-something Torontonians who comprise BadBadNotGood—keyboardist Matthew Tavares, bassist Chester Hansen, drummer Alexander Sowinski, and recent full-time addition and multi-instrumentalist Leland Whitty—all subscribe to a wardrobe of oversized shirts and long socks and short pants and chunky sneakers that would let them fade into the normcore masses. That’s appropriate, maybe; a session jam band like theirs, after all, is only supposed to support, to provide the backdrop, to be anonymous.

But increasingly, finding them in flesh and blood is becoming the only way in which it is hard to find them. They have become unlikely musical magic-makers, a bunch of Humber College dropouts who bonded in 2010 over Lil B mixtapes and Waka Flocka Flame and started making covers who are now increasingly the free-wheeling band on artists’ lips—or at least production credits, from Kendrick Lamar to Drake to Rihanna. Through tours and word of mouth, they’ve collaborated with all manner of hip-hop and pop royalty, from Future Islands’ Sam Herring and Odd Future’s Tyler the Creator (their initial champion on Twitter, in 2011) to Frank Ocean and the Wu-Tang Clan’s Ghostface Killah, with whom they built a sonic film noir on 2015’s Sour Soul. They’ve twice appeared on the shortlist for the Polaris Prize—an award that goes to Canada’s best album as judged by artistic merit—most recently for their 2016 album IV. Their rise was sparked, in part, by a unruly stage presence that’s more Liszt than Getz: performances would become mosh pits, fuelled by the energy of the sweaty, cocksure band, its drummer topped by a pig mask, while giving interviews that occasionally took swings at jazz school, discomfited old-school aficionados, and threw (since-retracted) shade at revered names like Robert Glasper.

And in a city that’s earned a reputation again as a fertile music hub, they and a collective of colleagues—one that includes ascendant names like Charlotte Day Wilson, River Tiber, Daniel Caesar (who recently sold out a string of five Toronto shows in minutes, each time a new show was announced) and Montreal’s Polaris winner Kaytranada—have become arguably the complementary second sonic half of this new Toronto sound. Despite a lack of meaningful infrastructure for homegrown artists, they’ve become the psychedelic, dynamic ying to the Drake-led OVO crew’s chilly, R&B/trap yang.

A support band at the core of a DIY collective starting to triumphantly step to the fore, though, isn’t quite what’s met in that Toronto rehearsal space, days before their Red Bull showcase. They’re huddled over their instruments, mutely running through their set save for a band’s usual patter and knowing cants. “There’s not the—” says Tavares, finishing the rest of the sentence by dancing his fingers over his keys as the band works out some kinks on the Oriental-feeling, cacophonous “And That, Too”; the Massey Hall show is his first with the band in months, after taking some time away. “If we do, I’ll go back to the—” rejoinders Hansen, worming out a bassline. “No, it’s just like—” interjects Sowinski, tapping out a code on his drum kit. When someone makes a mistake, there are raised heads and smiles shared. When Sowinski reminds Tavares mid-tune that now’s the time for a keyboard solo, he’s taken by surprise, but nevertheless seamlessly launches into one.

Certainly, the rehearsal’s languor partly stems from the fact that this hours-long practice follows a late-night flight in the middle of that long world tour. Still, it’s clear that seven years have brought perspective to a band that’s gone from wildchild outsiders to more or less an institution. Even the fact that they’re playing at Massey Hall—a venerable, seated concert venue—suggests a coming of age. And they’ll admit it themselves, too: they’ve changed.

“We were pretty arrogant toward jazz school and standards and stuff,” says Sowinski, the lanky drummer who has abandoned his pig-mask shtick. “But now that we’ve been fortunate to play, we see the value of things much more clearly. … We were just less experienced and less honest with each other. We were so focussed on, like, ‘this person liked our tweet or video,’ and that’s exciting, but different experiences really open the door to [realizing] how powerful and important support from friends and family is.”

The way the band works has changed, too. Where once a session felt like a failure if the band didn’t jam or record something they liked, they now acknowledge that “sometimes, the most productive studio days are where you just hang out and talk and maybe listen to music instead of making it,” says Hansen, the band’s languid bassist.

For them, it’s all about the all-important, mythical “vibe”—a concept that comes up repeatedly, like an incantation, over a half-hour conversation with Maclean’s. For the band, their energy and camaraderie comes from the music and musical interests they share with each other—the initial spark that brought the group together in Humber College—but also the “inside musical jokes” they drop on the stage or studio. At one point in rehearsal, the guys break into a quick bolt of laughter; later, Sowinski explains that it was prompted by “how crazy and weird harmony-wise that diminished chord following the sus [suspended] chord prior”—the kind of geeky shibboleth that speaks to an intimate language between them.

That vibe is also the glue that unites the Toronto-based collective of artists the band often plays with. Whether it’s with someone like Tommy Paxton-Beesley, who performs as River Tiber and played in a band with Sowinski before BadBadNotGood was formed, or it’s a New York rap legend like Jay Electronica, a secret guest who performed during their Massey Hall show and praised the band with glowing humility, their collaborations are built on temperament and musical affections, rather than rolodexes. “You can just tell right away about someone’s personality and humour, and as you get to know people, their interests and likes. And if everything clicks, they’re just someone you can make music with and grow with and feel comfortable around,” says Sowinski. “There’s a combination of personal vibe and musical openness that we share with people we like to work with,” adds Hansen—”taking their thing, whatever their thing is, and trying to meet in the middle of our two sounds.”

For an instrumental band that plays in a time where vocalists remain king—meaning well-placed collaborations are vital—and for a group that blends genres and relishes improvisation, their guiding-star sense of their own delicate, subjective vibe has been the key to their success. “We really have fallen in love and continue to be in love with improvising, letting someone speak and letting everyone support that,” says Sowinski. “Relating the worlds of music that we mesh together and to have really talented friends we get to make music with, and they help us excel and vice versa—it’s just passing around the love, really.”

Vibes, though, rarely pulsate into the popular consciousness like theirs has begun to. And because of that, they’re no longer the wild children in the short pants and comfortable runners, as much as a new institution in Toronto, spinning a web into a prolific family tree. But as they riff on how far they’ve come, and reminisce on their beginnings, there are still signs of the headstrong spirit and the chips on their shoulders that got them here.

“I’m sure when we first started we didn’t have the same chemistry that we do now,” says Hansen.

“I remember it being pretty good though,” Sowinski adds, smiling slyly.