These days, Céline Dion is revered—a notion that would have been absurd just a decade ago, writes Carl Wilson. What's changed? 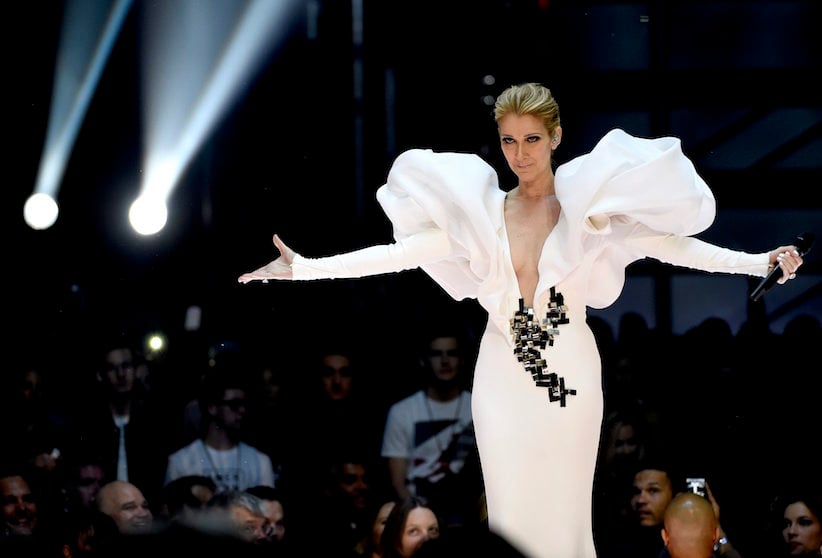 Celine Dion performs “My Heart will Go On” at the Billboard Music Awards at the T-Mobile Arena on Sunday, May 21, 2017, in Las Vegas. (Photo by Chris Pizzello/Invision/AP)

Drake is a global superstar, and Canada’s current biggest pop export—and even he couldn’t help but gush when he met Céline Dion. When he met her backstage last month at the Billboard Music Awards and rapturously told her, “You’re very iconic. … We love you,” he could have been speaking for much of Canada. No, not all of us might add that we’re “like a year away” from getting a Céline Dion tattoo, as Drake did, indicating a large space on his ribcage—but it’s increasingly clear that we’re with him in spirit.

Thirty-six years after her first album came out in Québec when she was just 13, and 20 years after her career peak with the Titanic love theme “My Heart Will Go On,” Dion remains the nation’s favourite Canadian female singer, according to Maclean’s Canada Project survey, in partnership with Abacus Data. The Québécoise diva, named by 28 per cent of respondents, came in nine points ahead of her nearest rival, 1990s country superstar Shania Twain. The bigger surprise might be that Dion is queen—at 24 per cent—even among Drake’s millennial cohort, who were just kids back when Dion’s signature power ballads were doing multi-octave cartwheels all over pop radio.

This Céline love isn’t just a Canadian phenomenon. Hosannahs for Dion’s Billboard performance this spring were everywhere. “Celine Dion Saved the Billboard Music Awards,” wrote The Atlantic. “Everyone Bowed Down to Céline Dion,” reported the ultra-hip music magazine The Fader. In fact, it’s become routine for young culture observers to pay tribute to Dion as artist, personality and force of nature; “Céline Dion is On Another Level of Cool,” an MTV News essay recently proclaimed.

At the height of Dion’s pop career, though, cool was one thing she absolutely was not. Despite her record-breaking sales and worldwide fandom, cultural gatekeepers shut her out as at once numbingly bland and embarrassingly over-the-top. (A tricky combination, if you think about it.) Rolling Stone called her voice “furniture polish”; another typical critic described her style as “eye-bleeding”; “My Heart Will Go On” regularly topped polls of the worst or most irritating songs ever. In 2002, the esteemed British pop critic and sociologist Simon Frith called Dion “probably the most loathed superstar I can remember … not just [by] critics but even my mother-in-law.” While many scorned pop acts eventually gain critical rehabilitation (“ABBA-style”), Frith figured Dion was just too tacky ever to qualify. It turns out he spoke far too soon.

And me, too, possibly. A decade ago, I made Dion the central figure in my book, Let’s Talk About Love: Why Other People Have Such Bad Taste, a study of the invisible workings of aesthetic judgment. I wanted to investigate how and why people often have dramatically clashing reactions to works of art. She seemed like the epitome of an artist who was simultaneously widely loved and scorchingly hated.

Yet even then, her reputation was already beginning to shift. In 2007, stars like Prince and producer Rick Rubin could often be found at her shows in Las Vegas, and young R&B artist-producers such as Timbaland and Ne-Yo were lining up to collaborate on Dion’s next album. “Celine has such a beautiful, mesmerizing voice,” Timbaland told Elle magazine. “I think we could create something that is a classic like she already is.” Guardian writer Caroline Sullivan felt compelled to protest with a piece called “Céline Dion is Not Cool”: “I’ve come to rely on Dion as the gold standard of middle-of-the-road rubbishness,” she wrote. “Is nothing sacred?”

Apparently not. The affection has been spreading ever since. Haters found fresher targets, such as Nickelback or Justin Bieber—and then, as a sampling-and-streaming and social-media culture changed the way we listen to and talk about pop, music snobbery itself has seemed to go almost out of fashion: It became cooler to be musically omnivorous. And while Dion’s more recent albums haven’t made much commercial impact, in fact that’s probably helped her image—it’s still the inescapable pop hitmakers who suffer the worst backlash.

In not trying to compete with today’s Taylor Swifts or Beyoncés, Dion has been freed to settle into the role that was always meant for her: old-fashioned showbiz icon. Her quirks, such as her famous chest thumps and fist pumps, have become as familiar and winning as the corny jokes of your favourite aunt. She’s no longer someone people feel the music industry is foisting on them, but a comforting presence who’s always been there. And nostalgia has a way of smoothing out cultural collision points; as a 1990s superstar, Dion now represents a seemingly more innocent era, before terror wars or Trumpism.

Most impressively, though, she doesn’t seem like an irrelevance. With most pop now so digitally processed, what once sounded “over-produced” about Dion’s music now seems refreshingly naturalistic—the same contrast that benefits her millennial counterpart, Adele. As well, the culture is now more in tune with her unabashed emotionalism than it was in her heyday, when irony and cool were basically synonyms. Perhaps that’s due to the state of the world growing darker, or maybe it was just the next wave of young people rejecting Gen-X-style cynicism. Either way, the likes of Drake and the Weeknd—to stick with Canadian examples—can rap and sing about sadness and loneliness without undermining their alpha masculinity. And we can all sing along with a Dion power ballad and smile knowingly through our tears.

With a perfectly Canadian humble confidence, Dion has stayed visible through the years without pursuing the spotlight the way she once did. On and off since 2003, she has been performing her nightly revue at a custom-built theatre at Caesar’s Palace in Las Vegas. That choice seemed to smack of premature retirement at the time, but the Vegas residency became a career move imitated by everyone from Elton John to Prince to Britney Spears. It relieves Dion of the need to tour too often, but when she does go on the road, her tours still set industry records.

She has always been careful about her public image. She releases concert films and select interviews that let her fans in on her backstage life with her three children, but she never becomes the object of gossip. And she’s proven nimble at avoiding divisive gaffes: When she turned down a request to perform at Donald Trump’s inauguration, for instance, she claimed it was because of her commitments in Vegas, although anyone could read between the lines who knows her quiet liberalism as a daughter of social-democratic Québec. That was demonstrated again in June by a Pride-season letter of support she wrote for the LGBTQ community, which includes many of her biggest fans and most loyal long-term advocates.

This evolution has been happening over the course of the last decade. But the decisive shift came early last year, with the January 2016 death of her husband René Angelil, who had also been Dion’s manager since she was a teenager. (Sadly, her brother Daniel also died just two days after Angelil.) His funeral at Notre-Dame Basilica in Montreal was practically a state affair, with Dion standing heroically in the cold for hours to accept the sympathies of friends, family and her fellow Québécois. She showed her sorrow openly when she returned to the stage; videos of her teary performances went viral.

Without diminishing her grief, it must be said that Angelil cast a long shadow, as Dion’s quarter-century-older Svengali. Now, she is on the verge of turning 50, and for the first time, no one else is the boss of Céline. She’s expressing herself a bit more boldly in fashion, in streetwear such as an oversized designer Titanic sweatshirt (which reportedly alarmed her mother for being unclassy) and this year, at her first appearance at the Met Gala, in a leather cutaway Versace gown. (Endearingly, she capped the night by wolfing down a hot dog from a sidewalk cart.) Her public comments also seem a touch less self-conscious. It’s tempting to wonder if she’ll even experiment a bit more freely with her music, though not to the point of edginess—who would really want that? This late in Dion’s story, though, a whole new chapter has begun.

In 2017, it seems impossible to imagine that anyone ever hated her. We love Céline for her voice, for her flair, for her goofiness and also for her vulnerability. We love her for the way she can take on the raiments of glamour while her homespun essence shines through. We love her for everything she’s always been and for what she was rejected for, too. For Canadians, in Québec but also beyond, she is our most unpretentious envoy. She may not have the poetic sensibility of a Leonard Cohen, Robert Lepage or Joni Mitchell. But she has enough heart to contain all our sprawling geography and harshness of climate, all our fractious identities, serve them up on an embroidered pillow or in a smoked-meat sandwich —in 2012, she became a part-owner of Montreal’s fabled Schwartz’s deli—and bring the world, for a fleeting, soaring moment, into sweeter harmony. Long may her chest keep thumping.