Music historian John Covach on what made Chuck Berry iconic in an era of song stylists, covers, and lyric sanitization 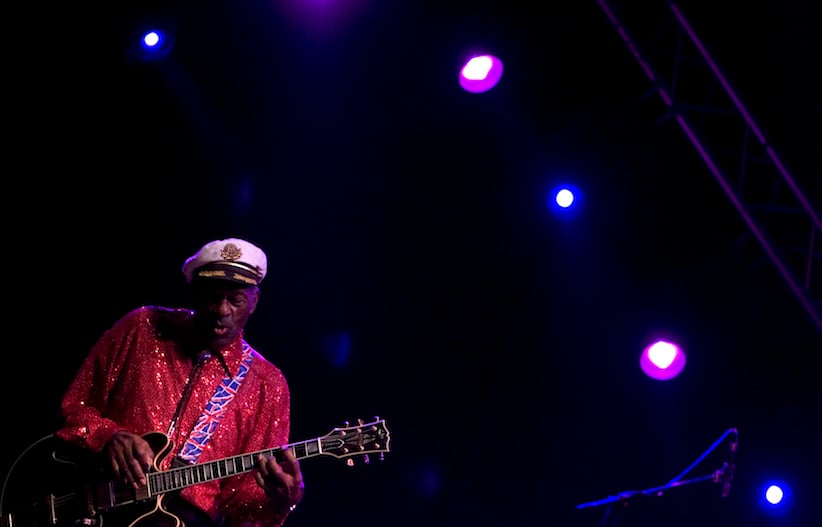 Few would deny that Chuck Berry—who passed away on Mar. 18 at the age of 90—was a central figure in the birth of rock ‘n’ roll. As a performer, guitarist, and songwriter, he played a crucial role in crafting a style that would dominate pop music for more than six decades. One important but perhaps sometimes overlooked key to Berry’s success and influence was his ability to make records that nobody else could copy. An artist could, of course, cover one of Berry’s songs—but his unique qualities made it nearly impossible to eclipse the Berry original. For a man whose claim to the title of rock ‘n’ roll’s founding father remains a lively question, this quality—his distinctiveness as both a performer and a songwriter—is, perhaps, at the core of his legacy.

Rock historians often cite 1955 as the birth of rock ‘n’ roll, though that year marks a breakthrough more than an origin of the style. It is possible to cite several candidates from earlier in the decade that seem to vie for the title “first rock ‘n’ roll record.” Jackie Brenston’s “Rocket 88” is an oft-cited top contender; recorded in Sam Phillips’s studio in Memphis and released by Chess Records in Chicago, “Rocket 88” rose to number one on the Billboard rhythm & blues charts in 1951. But like most early rockers, this record never crossed over to be a pop hit.

When Chuck Berry’s “Maybellene” went to number five on the pop charts in 1955, it was part of a new trend that would soon change pop-music history. Along with Bill Haley’s “(We’re Gonna) Rock Around the Clock,” Little Richard’s “Tutti Frutti,” and Fats Domino’s “Ain’t It a Shame,” “Maybellene” signalled the beginning of a rhythm & blues invasion of the pop charts: records that had been hits on the R&B charts increasingly crossed over to the pop charts to become hits there as well. “Maybellene” had been a number-one hit on the R&B charts; “Rock Around the Clock,” “Tutti Frutti,” and “Ain’t It A Shame” were all R&B and pop hits. By 1958, 94 per cent of the hits on the R&B charts crossed over to the pop charts, and Chuck Berry was an important catalyst for this change.

As it became clear that there was a burgeoning market in selling R&B records to white teenagers, it also turned out that the lyrics to some of these R&B records were considered too suggestive for mainstream white listeners, especially teens. Record companies recorded new versions of these R&B songs, often using white artists singing the newly sanitized lyrics. Pat Boone recorded versions of Little Richard’s “Tutti Frutti” and “Long Tall Sally”—as well as Domino’s hit, now titled “Ain’t That a Shame”—and these versions often outsold the originals. Bill Haley’s version of Big Joe Turner’s “Shake, Rattle, and Roll” removes almost all the sexuality from the lyrics, replacing the sex—as so often in early rock ‘n’ roll—with dancing. If you know what “shake, rattle, and roll” refers to on Big Joe Turner’s record, it’s clear that rocking around the clock is not about dancing. But most Bill Haley fans were none the wiser.

These subsequent versions are often called “covers,” but that term can be misleading in this context. Until the advent of rock ‘n’ roll, the song—not the recording—was the important thing. Once a song became popular, many artists would record it, each trying to put their own distinctive mark on it. Singers such as Bing Crosby, Judy Garland, and Frank Sinatra were song stylists; they did not write their own music and others routinely recorded the same songs they sang. This practice did not disappear in the first years of rock ‘n’ roll: Elvis Presley was a song stylist who never wrote a song and often recorded tunes already made famous—or at least recorded—by others. Even as late at the mid-1960s, Cher’s version of “All I Really Want To Do” chased The Byrds’ folk-rock version of Bob Dylan’s song off the pop charts.

In the 1950s world of song stylists, multiple versions of songs, and lyric sanitization, Chuck Berry flourished, enjoying a series of hit singles on the pop charts. While often cited for his performance style—the wry singing smile and the sensational duckwalk guitar solos—Berry’s projecting a distinctive image as a performer was within the standard practice for song stylists of his time. Berry certainly created a distinctive and now legendary singing persona, strikingly individual but also playfully rebellious. By contrast with the typical song stylist, however, Berry wrote his own music. Other early rockers, most notably Buddy Holly, also wrote their own songs. But it was Berry’s songwriting recalibration after “Maybellene” that ensured his success and made his records tough to copy.

Observing that R&B songs were being cleaned up for white teens—and that many black artists were losing out on pop success—Berry decided he’d focus directly on these teens in his lyrics. While “Maybellene” contains several phrases that could be construed as double entendres in the hokum blues tradition, the songs that followed steered clear of anything that could potentially offend. “School Day” and “Sweet Little Sixteen” resonated within the idealized daily lives of white teens, while “Roll Over Beethoven” captured an innocent sense of generational rebellion—delivered with a smile, never a sneer.

Berry’s lyrics were clever and well-crafted, filled with elegant yet simple turns of phrase that betrayed a careful attention to detail. His “Memphis, Tennessee” is perhaps the most ambitious, as Berry sets up a surprise ending to a song seeming to lament the pain of romantic separation. Berry’s dynamic performance style made him a distinctive voice while his songs needed no adjustment to appeal to a mainstream audience. Who would want to hear anybody else sing these songs? In the 1950s, not many.

Of course, later artists did indeed cover Berry songs, notably the Beatles and the Rolling Stones. But in the 1950s, listeners didn’t buy just a Chuck Berry song or just a Chuck Berry performance—they bought a Chuck Berry record. Berry’s recorded performances of his songs became authoritative—they were the ones by which all other versions had to be judged. This began a gradual transition in rock music away from the song as the focus and toward the record as the central thing. And now, once a particular recording becomes authoritative, we think of later versions as “covers” in the sense we understand this term today—thanks in part to Berry.

Because of the way Berry positioned himself during the early days of rock ‘n’ roll, he is remembered not just as an iconic performer or master songwriter, but as a model for artists who write and perform their own material. In many ways, the idea that rock performers should write their own music and that their original recordings of them should be authoritative began with Chuck Berry. His approach has become so deeply rooted in rock music that we sometimes have to remind ourselves that it was ever any different. Hail Hail Rock ‘n’ Roll.

John Covach is director of the University of Rochester Institute for Popular Music and Professor of Theory at the Eastman School of Music.