Clara Poppy Kushnir is the toast of this summer's festival for her turn in To Kill a Mockingbird, and the story's dark themes have seldom been so relevant 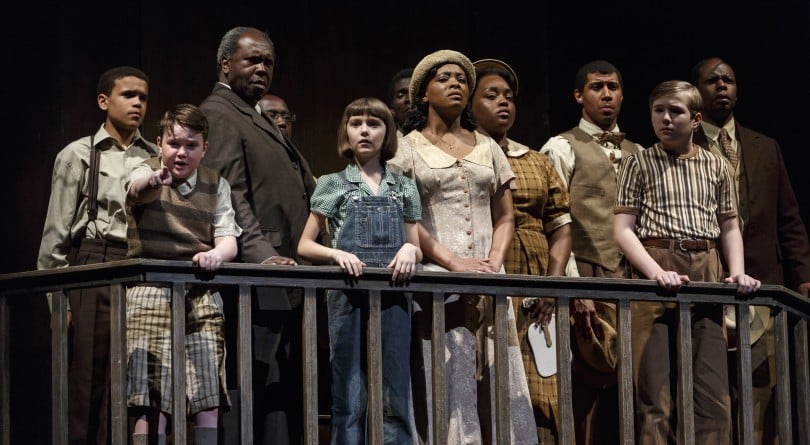 Five glasses sit on the Kushnir family coffee table: two pints of craft beer, two light rosés and a small Bugs Bunny cup of water. Bugs is for Clara Poppy Kushnir, 11 years old, who is at present lounging on the sofa munching on cherries, kielbasa slices and apple chunks dolloped with almond butter. While her parents chat with their guests about pool temperatures at a winter home in Turks and Caicos, Kushnir finishes her snack, hops off the couch, kneels to speak with her cat, Coco, then bounces upstairs. It’s time to get ready for work.

Kushnir is, in fact, the only one working in her family right now. She’s the lead actor of the Stratford Festival’s production of To Kill a Mockingbird, a heavy (and sometimes heavy-handed) adaptation of Harper Lee’s famous novel, by Christopher Sergel. Kushnir plays Jean-Louise “Scout” Finch, the tomboyish daughter of righteous lawyer Atticus Finch. While Atticus tries to save a black man wrongfully accused of raping a white woman in Jim Crow-era Alabama, Scout watches from the sidelines. Her innocence cuts through the tension, like when she asks what “rape” means, and the crowd laughs at her nanny’s response: “You gotta ask your father that!”

In real life, Kushnir knows what rape means. Sometime before rehearsals began in March 2018, the cast and crew were given a frank talk about sexual harassment in the workplace—this being two months after Albert Schultz was ousted from Soulpepper, one of Canada’s most acclaimed theatre companies, for allegedly sexually harassing several women. Cast members also got 10-page booklets on Jim Crow, detailing the era’s political enforcement of racial segregation, voter suppression and public lynchings. Backstage before each performance, Kushnir scrolls through news articles on her phone to remind herself of everyday racial injustice. “You’re gonna see at least one thing that’s happening now, today, that is racist, or that’s being very, very”—she isn’t sure how to pronounce the next word—“controver-sel. Controver-shel?”

Kushnir may be hyper-articulate and uncannily self-aware, but she’s still a kid. She fidgets with every part of her clothes, unleashing boundless energy across Stratford’s verdant summer grass. She tiptoes between chunks of duck poop littering the town’s riverside park, then calls out to a stranger, “I like your dog! It’s really cute.” The dog’s name, she learns, is Harry. “Oh, that’s a cute name,” she answers, skipping ahead. She runs up an arched wooden footbridge, but doesn’t reach halfway before getting distracted by a family of speckled mallards floating underneath. Kushnir loves animals maybe as much as she loves acting: she dreams of being a famous actor who also lives on a farm with “guinea pigs, ducks, foxes, chickens, cows, dogs, cats, maybe some fish—cowfish, to be precise.”

Her mother and father encourage these dreams. “We want her to be 11,” Jim Kushnir explains. Stratford was particularly serendipitous for him. He used to work in commercial real estate on Bay Street, but three years ago, a pivotal meeting changed him. He gathered his entire team around a conference table to present a strategy they’d spent months on; over speakerphone, his boss coldly tore it all down. “My whole face turned red,” Jim recalls. “I thought I was having a heart attack.” He was rushed to the hospital, but nothing was physically wrong. Seven months later, he quit.

Within a year, the Kushnirs sold their Toronto house—a cash-out that coincided with the Stratford call. The family committed to one year in the small town, living off their house-sale proceeds while Clara earns her future savings. After that, who knows? They might move back to Toronto, but they’re not in a hurry. Stratford has rejuvenated Jim. He’s grown a beard and spends days with his family, cooking and listening to music. “I feel like I’m a teenager again,” he says. That might be the most unpredictable part of all this: not only has Kushnir suddenly been thrust into adulthood, but her parents get to relive a kind of childhood.

Stacey is a social type, and has been the driving force behind her daughter’s extracurriculars, guiding her through dancing, singing and acting classes as a sort of manager. At nine, Kushnir opened a recital with a solo of Katy Perry’s “Part of Me”. Jim remembers sitting in the audience, hearing her sing for the first time, and thinking, “Holy s–t—I didn’t know she had that in her.”

The next year, she was acting professionally. With just two film roles under her belt, she walked into her Mockingbird callback and quickly won over director Nigel Shawn Williams. “She was herself. She didn’t have airs,” Williams says. “The danger of child actors who have a great amount of experience is they lose the effect of being a child.”

Days were longest in May, when the show opened for previews. Kushnir would arrive backstage at noon, warm up her voice and practise her fight scene, then get into costume and makeup. She is onstage for practically the entire performance, which lasts nearly three hours, after which the cast would break for dinner before toiling through rehearsals until 10:30 p.m.

Plus, there were the high schoolers. The festival bussed in thousands of them for matinees; in some cases, it was unclear whether they’d ever seen a play before. One chucked a quarter onstage, others laughed inappropriately or opened crinkly candy wrappers. That irritated Kushnir for sure, but she doesn’t hold anything against them. They just haven’t grown up yet.