A new Alpha Flight story in the 'Civil War II' series features Justin Trudeau—igniting Canadians' familiar thrill of being acknowledged at all by the U.S. 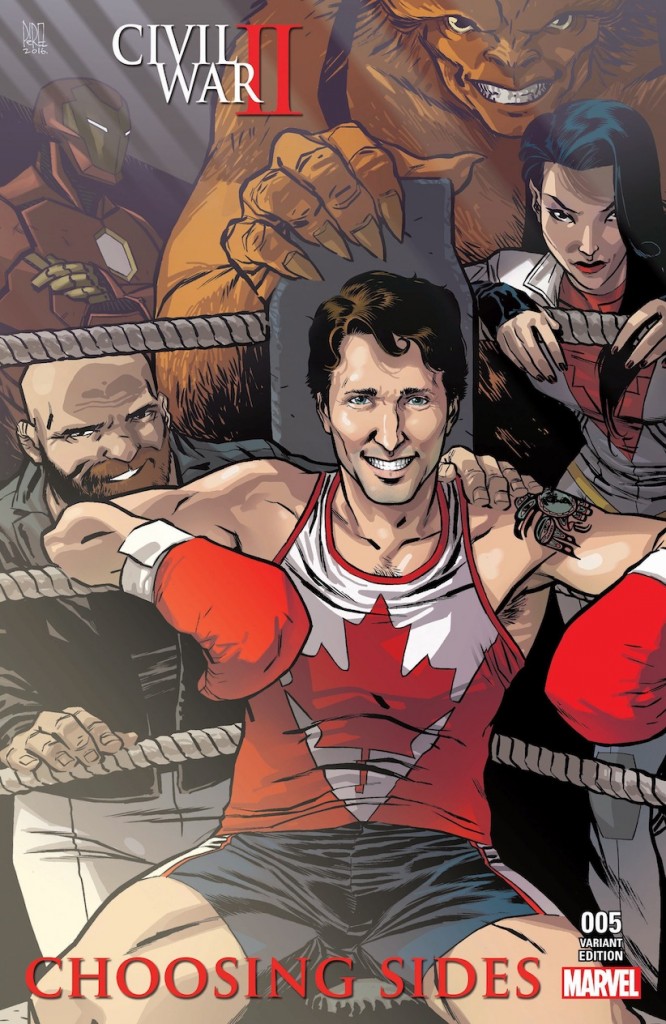 The variant cover of the comic Civil War II: Choosing Sides #5, featuring Prime Minister Justin Trudeau surrounded by the members of Alpha Flight: Sasquatch, top, Puck, bottom left, Aurora, right, and Iron Man in the background is shown in a handout photo. Make way, Liberal cabinet: Prime Minister Justin Trudeau will have another all-Canadian crew in his corner as he suits up for his latest featured role: comic book character. Trudeau will grace the variant cover of issue No. 5 of Marvel’s “Civil War II: Choosing Sides” due out Aug. 31. THE CANADIAN PRESS/HO – Ramon Perez

One of the odder things about long-running comic books is that the characters hardly age, but they keep running into different presidents and prime ministers. When Marvel Comics introduced the Canadian super-team Alpha Flight (co-created by Canadian artist John Byrne), Pierre Trudeau was running the country, and he was portrayed as kind of evil, or at least unscrupulous. Alpha Flight is still kicking around the comics, but now they answer to Pierre’s son Justin, who features in a new comic book story and variant cover in “Civil War II: Choosing Sides #005”. He’s portrayed a lot more positively than his dad, though.

Pierre’s negative portrayal is sort of an exception to the rule when it comes to comics and real-life figures. Usually when a comic brings in the sitting president or some other leader, that person is treated very respectfully. George W. Bush, probably not a favourite among most comic writers and editors, appeared in a number of comics after September 11, 2001, and received deference from the Avengers. Captain America has treated all U.S. presidents, like Bill Clinton, as holders of a noble office. And Barack Obama, being a known comic-book fan, got a special Spider-Man tribute.

Occasionally, you would see a comic make fun of the president, but not too much, and usually obliquely. In one of the more famous stories from the 1970s, Captain America discovered that Richard Nixon was the head of a secret evil organization, after which Nixon shot himself. But nobody ever said it was Nixon, and his face was never seen. When Nixon’s face did appear, he was only mildly mocked. Editors know that they can’t afford to annoy half their potential readers.

U.S. presidents rarely dominate news coverage when they appear in comic books, though. (Obama’s was a rare example of a heavily promoted appearance, along with the Archie comic where he met Sarah Palin.) When a Canadian leader appears, though, it’s big news. It’s not just Justin Trudeau who is getting a lot of press for this brief comic appearance. Back when Alpha Flight first appeared, Pierre’s cameo became national news in Canada, at a time when superhero comics were rarely covered in the mainstream press at all. The writer of the comic, Chris Claremont, got his chance to be interviewed for what he later referred to as a “massive avalanche of Canadian media coverage,” while a spokesman for Trudeau treated the whole thing rather sniffily: “Public figures end up in comic strips all the time, and we don’t attach any importance to them.”

Today, with superheroes in a more central place in popular culture (even though many fewer people actually read the comics), leaders are expected to be better sports and play along with the caricatures. But what hasn’t changed is the fact that Canadians are overjoyed to be acknowledged in U.S. media. Canadian shout-outs, like Robin on How I Met Your Mother being Canadian, get a disproportionate amount of attention up here. Part of it is that we get most of our English-language entertainment from the U.S., so we’re used to seeing entertainment where no one has ever heard of Canada, or where Toronto and Vancouver only exist to double for New York City. Seeing that our American media friends actually know who we are is a bit of a relief.

MORE: Sorry Canada, but we are America’s kid sibling

But these references are also fun because they seem like shout-outs from Canadians who contribute to U.S. media. The original appearance of Pierre Trudeau was a shout-out (if a slightly sour one) from Byrne, and today’s Justin Trudeau strip is the creation of a Canadian writer and a Canadian artist. (Listen to our interview with Chip Zdarsky here.) When our folks get successful enough to break into the U.S. market, we always appreciate a reminder that they haven’t forgotten their roots.

Correction: A previous version of this post referred to Trudeau appearing in an issue of Alpha Flight series. His appearance comes in “Civil War II: Choosing Sides #005.” We regret the error.