The six buzziest talking points from this weekend and beyond 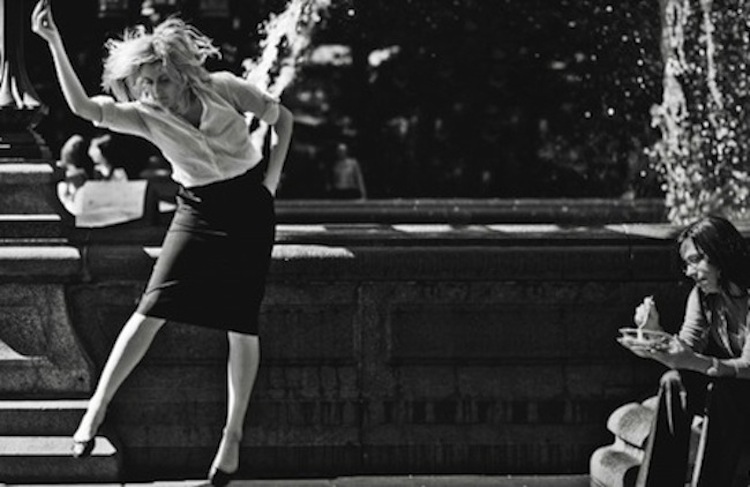 There once were doubts, now there are absolutely none: Canada is the champion, my friends. OF THE WORLD. Let’s just take a minute to drink that in.

Now, welcome to Six Ways to Sunday, your weekly digest of the buzziest matters in pop culture from the weekend and beyond.

1. GRETA GERWIG TO HELM HOW I MET YOUR DAD

This is why we can’t have nice things. Greta Gerwig, doe-eyed indie movie star who most recently caught widespread eyes with Frances Ha, set the world aflame by signing on to the spin-off of why-is-it-still-on-the-air How I Met Your Mother. The feeling among many: how dare this actress who so nimbly captured the effervescence and the inherent blind stumbles of being a young person right now in Frances Ha sell out to as louche a format as a network-TV sitcom, replete with canned laughs.

Well, let’s just hold our horses for a second. Greta Gerwig is not your best friend. She’s not even an acquaintance of an acquaintance. At 31, she is a young person, sure, but is an actor first, and actors pursue bigger and better roles for bigger and better paycheques. That’s simply the reality, and it’s impossible to begrudge. But the more interesting question at play is whether or not there is an odd double standard at play between our screen stars and those in the other arts. It’s a natural off-shoot of the increasing habit to refer to celebs like pals. OMG, we cry, Jennifer Lawrence talks about farts! And yet in music, pop is the hot-button lingua franca (Pitchfork, for instance, reviews Katy Perry with the same intelligent laser focus as, say, indie darling St. Vincent). We’ve long lost the stigma of “going mainstream” in music, and finding success remains a lauded thing in things like theatre and the opera. So why won’t we let Gerwig, who owes us nothing, enjoy this success?

But here, too, is another great thing about Gerwig’s decision: if the pilot makes it to series–and that feels all but assured, since HIMYM remains improbably popular, despite its dilution over the last three years–Gerwig will be producing and writing. That’s an interesting thing to do, and a bold kind of voice for just that staid TV-sitcom format. Imagine: an NBC show that actually reflects life as a young person/millenial? From a voice that seems to understand what it’s like to be rich in love but impoverished in reality? This very feature has panned the mere idea of How I Met Your Dad before, but this decision may yet be one of the few things NBC could have done to make me interested in seeing where that first season goes. Automatically, a Joey it probably is not. And that, we can at least agree, is a very good thing.

(Speaking of atrocious returns/spin-offs: Welcome back, Heroes. NBC can’t get it all right. [Or most of it, actually.])

2. IN DEFENSE OF JIMMY FALLON
Speaking of questioned decisions involving NBC, this is Jimmy Fallon’s first week at the helm of the vaunted Tonight Show, and reviews have been mixed. The ratings have been fantastic–the best week of ratings in 20 years–but have you known critics to not find nits to pick?

John Doyle at The Globe and Mail, for instance, said that Fallon’s biggest weakness, and perhaps his inevitable downfall, comes from the fact that he’s too nice, that he’s not ironic or cutting or caustic, like his peers Letterman or Kimmel. A fair observation, to be sure, that the circuit is much more wry than it is sweet – except a generation deemed unable to feel earnestly has felt quite strongly for the late-night show host who is nothing if not earnest. And that’s exactly how one observes the budding of a trend, rather than a reflection of a doomed outlier.

His success is probably thanks largely to the fact that it has never been less about the frontman whose name is on the marquee. Just take a look, for instance, at its most viral video this week, which hinges less on Fallon being there and more on his pairing with Justin Timberlake for yet another privileged bop through a curio curation of hip-hop history. But even more so, look at its second-most viral video, which is a fantastically edited supercut of Brian Williams’s Nightly News to make him appear to be performing Rapper’s Delight.

And that also alludes to the social media quotient, which goes even beyond what we’ve merely hinted at–that he’s got a big social media following–and toward what Facebook is really all about, which is paid recommendation. For as long as Facebook–the goliath it still remains among social media networks–has had its trending recommendations, Jimmy Fallon has been the only one that I’ve seen make a real notch on its trending topics, a self-feeding frenzy of hype and reminders of what it is that we’re supposed to want. Jimmy Fallon’s show is a crowd-sourced community-managed social-media-boosted program nonpareil, and that’s not at all to its discredit: in a way, it’s the perfect show for its time, a sensibility that we (yes, even the young) are actually in many ways clamouring for, which is a response the selfsame profound irony that others have deemed us to seek when in reality the shows that are finding its footing right now (like, say, Bob’s Burgers, but also reflective of a trend in comedy, from the loving Parks and Recreation to Brooklyn Nine-Nine, where the coworkers seem to enjoy working with each other) offer a relatable warmth and charm beyond the castigating caustic qualities. You don’t have to eschew cuteness for being cutting; in fact, if Fallon put that on, it would feel like a betrayal. His genuineness is his brand, and he seems genuinely a nice guy–it’s working for him, as much as it really possibly can, at a time where that actually feels like that’s on the rise, and putting the Tonight Show chips on him feels like a bold maneouvre, in going away from the ease of the cuttingly ironic. The easy thing for a network to do would be to merely follow blindly the word of social media as saviour. Instead, they’re letting one of their most important franchises inhabit it entirely.

If you were someone of a particular age, Friday night was a rollercoaster of emotions. Caught as we are in an era where we long for the recent past, 20-somethings collectively had their mind exploded when reliable Hollywood insider Deadline.com reported that a sequel to Space Jam–that brilliant cultural touchstone wherein Michael Jordan and the Looney Tunes family take on aliens in a game of basketball to defend Earth–was in the works, starring all-universe basketball player Lebron James in the main sporting role. Then, in a matter of minutes, in a classic Lebron move, James’ handlers crushed our hopes like he did to so many Cleveland fans, denying that he was going to have anything to do with the sequel. But then hope remains glimmering: reports suggest the movie may yet go ahead, with or without Lebron. We hope he just takes some of Bugs’s “special drink” and takes his talents to the Looney Tunes, even though we all secretly know that the Miami Heat are just the real-life versions of the Monstars.

But even more important than that news, if you’ve missed it to this point: the Space Jam official website is still completely unchanged from when it was made in 1996, and it is a perfectly preserved artifact of the interweb’s earliest days with its ancient scripts and awful design decisions, and it is glorious.

He’s the hottest hitmaker in music right now, coming off a major coup by assisting with Daft Punk’s Best Album Grammy and Robin Thicke’s Blurred Lines, the song of the summer. He hasn’t had an album out in eight years. With his amazing history of collaborations, he’s amassed a rolodex that may be the richest in the industry. He made buzz just for wearing a hat. And Maclean’s named his album one of the ones we’re most excited about this year. And yet the reveal that Pharrell Williams’s next album, G I R L, will come out March 3, came in a blink-and-you’ll-miss-it announcement. By far the most ridiculous thing from Beyonce’s phenomenal out-of-nowhere self-titled December release was how she claimed, on a track, that she was “not gonna make any money from this.” Well, based on her earnings for that album, and Pharrell’s sneaky-quiet announcement, she’s definitely wrong–that surprise move was a game-changer. Get ready for an explosion, people. Hopefully you have a chance to see it coming.

So, hockey is the best, and Canada just crushed it in that particular sport, so obviously, what you want to read now is a long, fascinating feature about hockey from The Atlantic, purveyors of so many long, fascinating features. The country was wracked with paroxysms, as recently as a week ago, about the future of Canada’s crease–questions that have now been so contentedly quenched by Carey Price’s impression of a brick wall–but The Atlantic has this story about how Finland hasn’t just narrowed the gap on our goalie pipeline, it has triumphed: Tuukka Rask, Antti Niemi, Kari Lehtonen and Pekka Rinne are Finnish and arguably in the top 12 at their position. This is the story of the man behind the masks.

6. NFL MAY PENALIZE THE USE OF THE N-WORD

Here’s a good idea that may yet produce unintended consequences: the NFL is in talks to create a 15-yard penalty for any player or coach that utters the n-word. This feels very much like throwing a small cork into a boulder-wide hole in a dam, not to mention fixing a problem that isn’t truly in its main wheelhouse: yes, the n-word has played a role in a few major recent NFL embarrassments, but more than that, it’s a well-intentioned proposal that may backfire. Recall that former NBA commissioner David Stern, years ago, touched off a racially-driven debate when he mandated a formal dress code, effectively to expunge “streetwear” from basketball. Since then, NBA stars have taken to it by dressing with their own unique take on improbable style, but it required yet another kind of appropriation, much in the same way that African-Americans have had to reappropriate the n-word. It’s not an exact parallel, but there’s a long tradition of reappropriation: conscious rap group A Tribe Called Quest had a thoughtful take on that appropriation on 1993’s Midnight Marauders; Kanye West’s latest tour merchandise feature the Confederate flag, in an effort to make it mean something else and deny it its historical power; for many African-Americans, the n-word is part and parcel of their daily speech. And while I’m not saying it’s a bad idea, and I am acknowledging that this is a big, bold step, I am saying that it’s important–as always–to consider the context, acknowledge the privilege, and see who this would really affect.