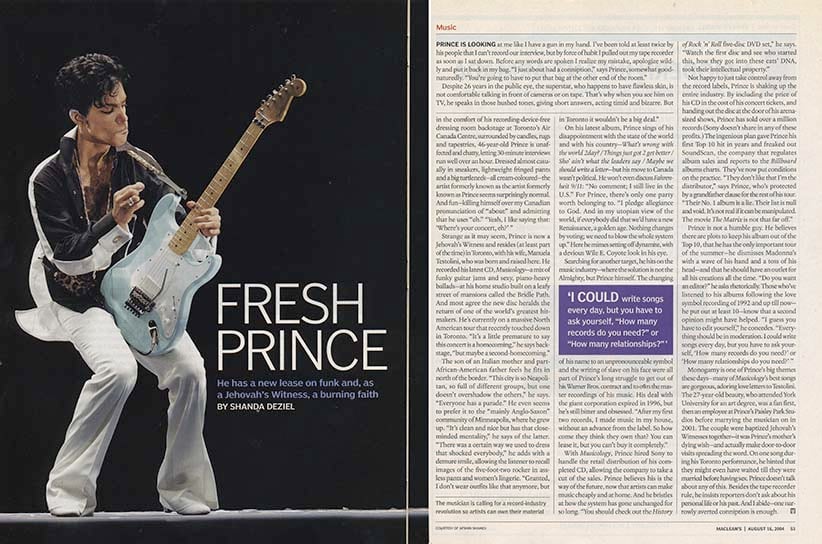 Prince is looking at me like I have a gun in my hand. I’ve been told at least twice by his people that I can’t record our interview, but by force of habit I pulled out my tape recorder as soon as I sat down. Before any words are spoken I realize my mistake, apologize wildly and put it back in my bag. “I just about had a conniption,” says Prince, somewhat good-naturedly. “You’re going to have to put that bag at the other end of the room.”

Despite 26 years in the public eye, the superstar, who happens to have flawless skin, is not comfortable talking in front of cameras or on tape. That’s why when you see him on TV, he speaks in those hushed tones, giving short answers, acting timid and bizarre. But in the comfort of his recording-device-free dressing room backstage at Toronto’s Air Canada Centre, surrounded by candles, rugs and tapestries, 46-year-old Prince is unaffected and chatty, letting 30-minute interviews run well over an hour. Dressed almost casually in sneakers, lightweight fringed pants and a big turtleneck—all cream-coloured—the artist formerly known as the artist formerly known as Prince seems surprisingly normal. And fun—killing himself over my Canadian pronunciation of “about” and admitting that he uses “eh.” “Yeah, I like saying that: ‘Where’s your concert, eh?’ ”

Strange as it may seem, Prince is now a Jehovah’s Witness and resides (at least part of the time) in Toronto, with his wife, Manuela Testolini, who was born and raised here. He recorded his latest CD, Musicology—a mix of funky guitar jams and sexy, piano-heavy ballads—at his home studio built on a leafy street of mansions called the Bridle Path. And most agree the new disc heralds the return of one of the world’s greatest hitmakers. He’s currently on a massive North American tour that recently touched down in Toronto. “It’s a little premature to say this concert is a homecoming,” he says backstage, “but maybe a second-homecoming.”

The son of an Italian mother and part-African-American father feels he fits in north of the border. “This city is so Neapolitan, so full of different groups, but one doesn’t overshadow the others,” he says. “Everyone has a parade.” He even seems to prefer it to the “mainly Anglo-Saxon” community of Minneapolis, where he grew up. “It’s clean and nice but has that close-minded mentality,” he says of the latter. “There was a certain way we used to dress that shocked everybody,” he adds with a demure smile, allowing the listener to recall images of the five-foot-two rocker in ass-less pants and women’s lingerie. “Granted, I don’t wear outfits like that anymore, but in Toronto it wouldn’t be a big deal.”

On his latest album, Prince sings of his disappointment with the state of the world and with his country—What’s wrong with the world 2day? / Things just got 2 get better / Sho’ ain’t what the leaders say / Maybe we should write a letter—but his move to Canada wasn’t political. He won’t even discuss Fahrenheit 9/11: “No comment; I still live in the U.S.” For Prince, there’s only one party worth belonging to. “I pledge allegiance to God. And in my utopian view of the world, if everybody did that we’d have a new Renaissance, a golden age. Nothing changes by voting; we need to blow the whole system up.” Here he mimes setting off dynamite, with a devious Wile E. Coyote look in his eye.

Searching for another target, he hits on the music industry—where the solution is not the Almighty, but Prince himself. The changing of his name to an unpronounceable symbol and the writing of slave on his face were all part of Prince’s long struggle to get out of his Warner Bros. contract and to own the master recordings of his music. His deal with the giant corporation expired in 1996, but he’s still bitter and obsessed. “After my first two records, I made music in my house, without an advance from the label. So how come they think they own that? You can lease it, but you can’t buy it completely.”

With Musicology, Prince hired Sony to handle the retail distribution of his completed CD, allowing the company to take a cut of the sales. Prince believes his is the way of the future, now that artists can make music cheaply and at home. And he bristles at how the system has gone unchanged for so long. “You should check out the History of Rock ‘n’ Roll five-disc DVD set,” he says. “Watch the first disc and see who started this, how they got into these cats’ DNA, took their intellectual property.”

Not happy to just take control away from the record labels, Prince is shaking up the entire industry. By including the price of his CD in the cost of his concert tickets, and handing out the disc at the door of his arena-sized shows, Prince has sold over a million records (Sony doesn’t share in any of these profits.) The ingenious plan gave Prince his first Top 10 hit in years and freaked out SoundScan, the company that regulates album sales and reports to the Billboard albums charts. They’ve now put conditions on the practice. “They don’t like that I’m the distributor,” says Prince, who’s protected by a grandfather clause for the rest of his tour. “Their No. 1 album is a lie. Their list is null and void. It’s not real if it can be manipulated. The movie The Matrix is not that far off.”

Prince is not a humble guy. He believes there are plots to keep his album out of the Top 10, that he has the only important tour of the summer—he dismisses Madonna’s with a wave of his hand and a toss of his head—and that he should have an outlet for all his creations all the time. “Do you want an editor?” he asks rhetorically. Those who’ve listened to his albums following the love symbol recording of 1992 and up till now—he put out at least 10—know that a second opinion might have helped. “I guess you have to edit yourself,” he concedes. “Everything should be in moderation. I could write songs every day, but you have to ask yourself, ‘How many records do you need?’ or ‘How many relationships do you need?’ ”

Monogamy is one of Prince’s big themes these days—many of Musicology‘s best songs are gorgeous, adoring love letters to Testolini. The 27-year-old beauty, who attended York University for an art degree, was a fan first, then an employee at Prince’s Paisley Park Studios before marrying the musician in 2001. The couple were baptized Jehovah’s Witnesses together—it was Prince’s mother’s dying wish—and actually make door-to-door visits spreading the word. On one song during his Toronto performance, he hinted that they might even have waited till they were married before having sex. Prince doesn’t talk about any of this. Besides the tape recorder rule, he insists reporters don’t ask about his personal life or his past. And I abide—one narrowly averted conniption is enough.