The great Montreal bandleader Vic Vogel calls in sick for his farewell gig. Paul Wells looks back on a legendary career. 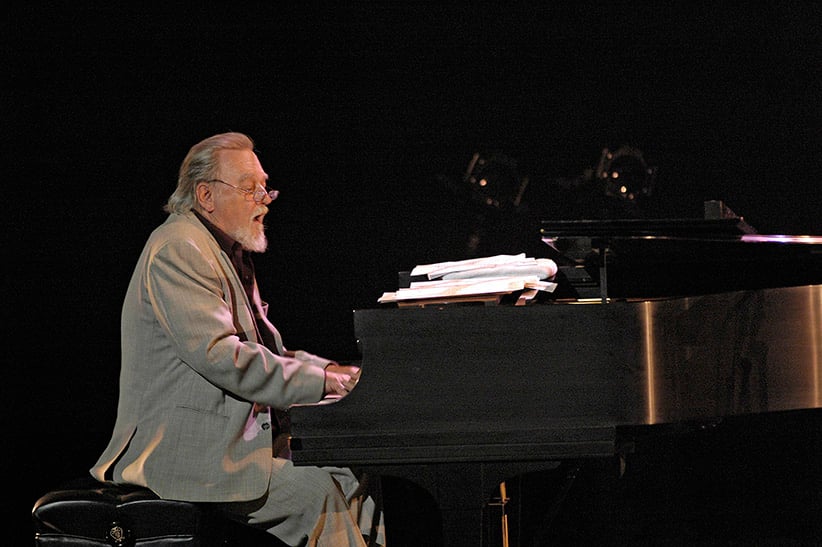 Distressing news from Montreal, where Vic Vogel’s Le Jazz Big Band will play a show on Tuesday night at the Montreal International Jazz Festival. That’s always good news; the distressing part is that, for the first time in the history of the festival, Vogel won’t be there. The festival announced today that he’s too ill to attend what was already billed as his farewell concert. It’s not surprising—Vic will be 80 in August—but it marks the bittersweet end of an era in Canadian music.

Vogel was one of the headliners at the very first Montreal jazz fest in 1980, on Île Ste. Hélène, along with Ray Charles and Chick Corea. I first saw him in 1989, his 10th festival appearance. He had already been a fixture on the scene forever: born in 1935, a soloist on CBC Radio by 1949, a big-band leader from 1967 onward. Flyaway hair, already greying when I met him in his mid-50s, and a tidy goatee. Piano was his main instrument, but he’d also learned trombone, vibraphone and tuba. As a young musician, he’d go see drummer Al Cowans and saxophonist B.T. Lundy at the Latin Quarter in the 1950s, drinking in the atmosphere, taking notes on proper, or at least acceptable, bandstand comportment. “We used to bring a bag of grapes and some sandwiches and sit in the balcony,” he told me in 1991. “It was the only gig that us kids could get into.” He liked to proclaim that he’d “opened” Salle Wilfrid Pelletier at Place des Arts, days before the Orchestre symphonique de Montréal played their first concert there in 1963: Vogel and another guy climbed onto the roof of the place and Vogel dangled his feet over the edge of the roof, playing trombone.

His big band, staffed disproportionately by Montreal’s finest jazz musicians from several generations—trumpeters Ron Di Lauro and Joe Sullivan, saxophonists André Leroux, Yannick Rieu and Dave Turner, plus dozens of others—kept up steady Monday rehearsals in the basement of the Grand Café on Saint-Denis Street into the 1990s. Increasingly, these were social occasions as much as they were preparation for any sort of work, because the gigs by then were not particularly frequent, but the guys enjoyed hanging out with Vic, so what the heck. I interviewed him there one night for an upcoming gig and he reminisced about the old days, when Montreal was the id to Toronto’s prim and tidy ego. “I played (at the Lion d’Or) when I was 16 years old,” Vogel told me. “In those days, it was not unusual for the band to dive under the grand piano on Saturday night when a guy came in with a machine gun.”

Vogel’s band has always maintained some of that scruffy, hectic, old-style attitude. A fine pianist whose style ranges from barrelhouse boogie-woogie to mere anarchy, Vogel is also a rough-and-ready arranger—his O Canada, written for the 1976 Montreal Olympics, is the version generations heard in movie theatres and morning school assemblies for decades after—who has always been notoriously flexible about the circumstances in which he’ll play. When Offenbach, a staunchly working-class Quebec rock band, whose members included Gerry Boulet and Breen LeBoeuf, decided to put on airs and tour Quebec with a big band, Vogel and the guys fit the band like a glove; the resulting 1980 live album, Offenbach en Fusion, was an instant hit.

His jazz festival appearances have not always been major productions—on alternating years, he and the band simply played a free concert on one of the outdoor stages—but, more than once, they were spotted on the big stage at Salle Wilfrid Pelletier and, one year, they even wore tuxes. The finery had only a partial civilizing effect on a band that was always cheerfully ragged and arrangements more notable for their spirit than their intricacy.

Vic’s introductions, distractedly improvised, were a reliable highlight. “This next song was made famous by another great singer, Billy Holiday,” he said one afternoon on a stage on Saint-Catherine Street. He paused to consider. “She’s dead.” Another pause. “All the great singers are dead.” Further pause. “There’s nothing better than a dead singer.”

So he’s always been crazy, but crazy like a fox. He started travelling frequently to Cuba and, as good musicians always do, came back with Cuban musicians and with new rhythms and structures sneaking into his music. He was a judge one year for a competition among up-and-coming young jazz bands, and was furious at the missed opportunity when a very good saxophonist chose to perform on piano instead. “He wasted a year!” Vic told me.

The sound of Vic Vogel’s band in full roar has been indissociable with the sound of Montreal for longer than many Montrealers have been alive. On Tuesday, at Théâtre Maisonneuve, his place at the piano bench will be taken, in turn, by some of the city’s finest pianists, including Oliver Jones and Lorraine Desmarais. The band will roar in unison and then peel out of formation, one at a time, for solos designed to raise the roof. Thirty-five consecutive years of great and rambunctious music at the world’s greatest jazz festival will come to an end. What a ride it’s been.