No one puts 'Maybe' in a corner: Carly Rae Jepsen's next chapter

How do you make a follow-up to a record that sold 300,000 copies? Very slowly. And while playing Cinderella on Broadway. 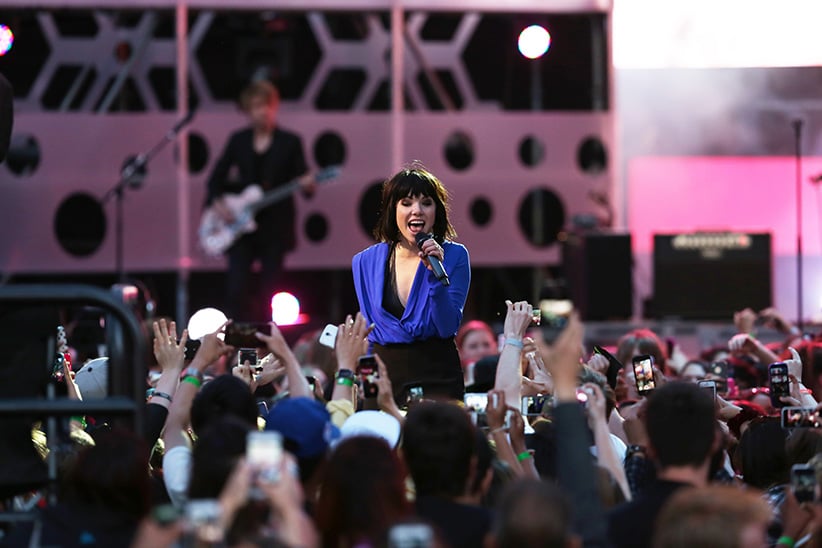 When Cyndi Lauper released her first major single on Sept. 6, 1983, Girls Just Want to Have Fun, she had no idea it would become one of the defining songs of the 1980s and kickstart a long and successful career. In Lucy O’Brien’s book She Bop: The Definitive History of Women In Rock, Pop & Soul, the trailblazing American singer-songwriter, actress and LBGT activist recalled, “At the time of Girls Just Want to Have Fun, I was shocked at the reaction. I’d go on stage and the audience would be filled with girls screaming, ripping at my clothes. I’d never heard girls screaming over a woman before.”

Someone else who knows a thing or two about that (screaming girls and all) is Carly Rae Jepsen. In early 2012, the native of Mission, B.C., and one-time Canadian Idol contestant put out an EP with a song called Call Me Maybe, which caught the attention of Justin Bieber. He introduced her to his manager, Scooter Braun, who ended up signing her to his label and getting her an international deal with Interscope Records. One studio album (Kiss), a handful of major award nominations, and 700 million YouTube views later, Jepsen is a household name.

But how do you follow up a record that sold close to 300,000 copies worldwide? How do you attempt a normal life after your biggest song has been covered, parodied and lip-synched to by everybody from Katy Perry to “Weird Al” Yankovic?

In the intervening years, Jepsen was written off as a one-hit wonder. She saw her music dismissed as the product of a team of record-label executives, boldface producers and ghostwriters—the same skepticism faced by Lauper and countless other female artists. The Twitter account @Discographies, which humorously sums up artists’ catalogues, offered a less-than-hopeful take on her trajectory: Carly Rae Jepsen: New York Times, May 2043: “ ‘I don’t miss it,’ says Ms. Jepsen, 57, the owner of a chain of nail salons in Mississauga.”

But, three years later, the singer is on the cusp of releasing her highly anticipated follow-up. Emotion, her third album, is out on Aug. 21 in North America. After the triumph of Call Me Maybe—countless TV performances, international touring—Jepsen disappeared from the spotlight, sort of. Unlike fellow Canadian pop star, friend and sometime collaborator Justin Bieber (who co-starred with Tom Hanks in the music video for her infectious new single, I Really Like You), her extracurricular activities largely stayed out of the tabloids. “When I first moved to Los Angeles, I found it really superficial, and I think I was really uncomfortable with my new-found fame,” she told Maclean’s when she was in Toronto recently for the MuchMusic Video Awards, where she opened the show with a performance of I Really Like You. 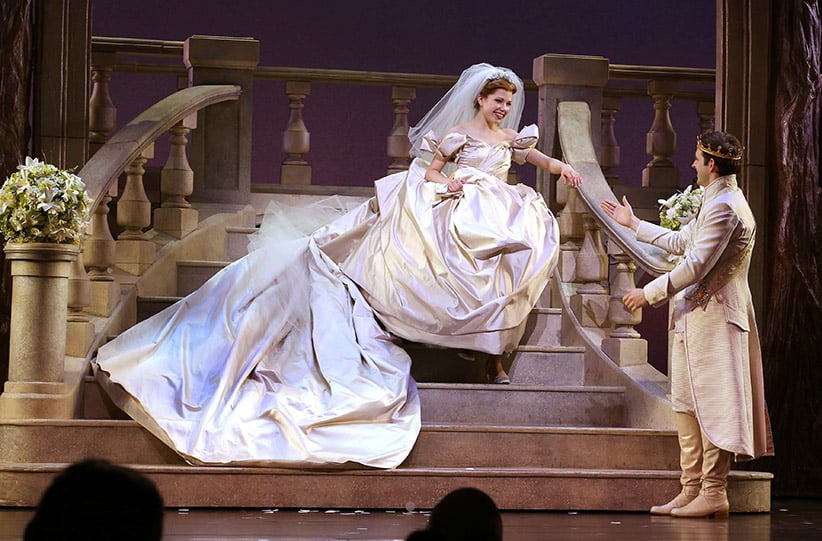 Carly Rae Jepsen with Joe Carroll as she makes her debut in ‘Broadway’s ‘Rodgers and Hammerstein’s Cinderella’ at Broadway Theatre on February 4, 2014 in New York City. (Walter McBride/WireImage/Getty Images)

Instead, she ended up playing Cinderella in the Broadway production of the Rodgers and Hammerstein musical in February 2014, an experience she describes as “gratifying and humbling.” Says Jepsen, “It sounds silly, because it’s like, ‘You did a Broadway show,’ but no one at Broadway cares about your pop history. If anything, you have to work twice as hard to get over that, and I felt that was really good for me.” Originally committed for three months, she ended up extending her contract by another three months, but eventually found herself getting distracted by the desire to make a new album. She was working out lyrics and musical ideas as per her agreement with her label—“to the point where, at one point, the [actor playing the] Prince was like, ‘Are you working on a song right now?’ ” she recalls.

The demands of her day job—six shows a week—meant there were no marathon studio sessions. “Usually, I would write a song and record it another day to save my voice. There was the night we wrote the song Emotion, I was so excited that I went right to the studio and recorded it,” says Jepsen. “Then I had to go to Cinderella and I had no falsetto. It was Cinderella sounding like Janis Joplin.”

The Cinderella gig affected her music in other ways. “A lot of pop is about putting as much personality and crunch as you can get into every sentence; it can be a really unhealthy way to sing,” she says. “All those ‘ugh ugh ughs’ are good in pop music, but not as Cinderella.” She needed some post-Broadway retraining, but “the band boys did notice that when I came back I was singing in a stronger way,” she says.

Her years away have ended up giving her the freedom to reframe herself. Asked what she considers the record’s prevalent sentiment, Jepsen pauses before answering. “Pining, I think—the want of love and all the chaos that goes along with it. Every song has its own colour to it.”

“There’s so much forward-thinking music on Emotion, and there’s a greater depth to her lyrics,” says Boston-based music critic Maura Johnston. “Her voice has this very familiar quality to it that’s very endearing and human.” That’s a far cry from how Johnston described Call Me Maybe in a 2012 Village Voice article: “the sonic equivalent of a cartoon character’s eyes turning into big pink hearts.” 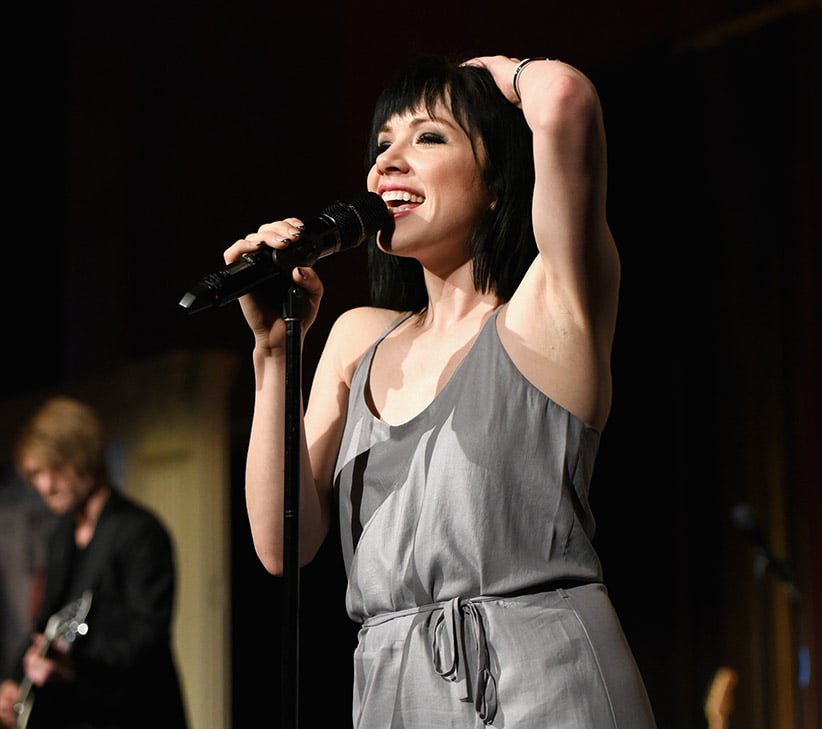 For Emotion, Jepsen largely eschewed big-name producers in favour of an eclectic list of collaborators and writers she handpicked herself. They include L.A. producer Ariel Rechtshaid (who has worked with Haim, Solange Knowles, and more), the Swedish musician Peter Svensson (best known as the guitarist in ’90s alt-pop group the Cardigans), New York singer-songwriter Blood Orange (a.k.a. Dev Hynes), and Vampire Weekend multi-instrumentalist Rostam Batmanglij. She wrote more than 250 songs, whittling that down to just 12 by sending 40 of them to family and friends for feedback.

Her hard work endeared her to collaborators. “Some pop stars get lazy and they say, ‘Get me this person to write me a hit, I’ll be by the pool, let me know when you want me to sing,’ ” says Zachary Gray of Vancouver band the Zolas, who co-wrote and produced L.A. Hallucinations, from the new album. “Instead, she trotted the globe for two full years, recording and writing on every continent with different people.” Praising Jepsen’s “effortless voice,” he adds, “She’ll record a voice memo on her phone in the back of a taxi cab, show it to you saying, ‘This is an idea for a song,’ and I’ll be like, ‘I just want to take that recording because it sounds so good.’ ”

Response to the record has already been positive. The slow-burning ballad All That, released in April, proved Jepsen is no one-trick pony, and earned her acclaim from outlets that previously ignored her music. She won a “best new track” distinction from taste-making website Pitchfork. (“I just recently learned what Pitchfork is,” Jepsen confesses, “and that’s not because I’m not a fan of all sorts of media, but because I don’t really pay attention to any media. At all. I think it would change the way I would write.”) Earlier this week, Entertainment Weekly praised her latest single, Warm Blood, calling it “a woozy, ’80s-tinged highlight on an album that itself will prove a highlight of 2015.”

Unlike on Kiss, there are no featured artists, save vocals from Sia on Boy Problems. The album is full of the memorable hooks her fans have come to expect. “It’s very light, but at the same time, she’s challenging the ideas of how far you can push a pop song,” says Johnston. Drawing on influences including Lauper, Madonna and Prince, it’s unmistakably a Carly Rae Jepsen album, albeit one that’s more cohesive and reﬂective of the singer’s worldly experiences. (L.A. Hallucinations, which features the line “BuzzFeed buzzards and TMZ crows,” was inspired by her run-ins with paparazzi in Los Angeles.)

As for the relationship with her most famous song today, she admits it’s “a little like, ‘Ohhh, okay, that song again.’ That being said, it’s been more a gift than anything else. It’s always nice to see a spark in your life. I can find joy in that, getting to see other people experiencing it, and that’s enough for me to continue playing it and feel like it’s worth it.”

In the shadow of that megahit, maintaining artistic independence hasn’t always been easy. After spending time working in the studio with Tegan and Sara (“I’ve been a fan for years and saw them back when they were playing folk festivals in Canada”), she took to heart some advice that the Calgary twin sisters gave her. “They were both very encouraging that I should keep fighting for my writing,” says the singer.

In June, she had the honour of inducting Cyndi Lauper into the Songwriters Hall of Fame, and paid tribute by covering her 1984 hit Time After Time with a full band. “I was on the red carpet with her, and I said, ‘Congratulations, you must be so proud,’ and she said, ‘My whole life, I had to fight to put every song I wrote on the album,’ ” says Jepsen. “And I was like, ‘It’s not too different nowadays.’ ”