... on the highest note she ever hit, her insecurities, and what she thinks of Quebec’s charter of values 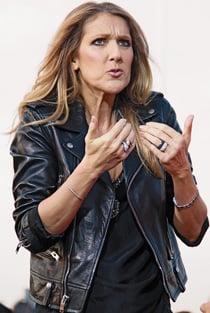 It’s hard to believe it’s been more than six years since Céline Dion recorded her last English-language album. The birth of her twins in 2010, the much-publicized purchase—and listing—of her $72.5-million water-park-themed home on Jupiter Island, Fla., and her profitable residency at Caesars Palace in Las Vegas (recently extended until 2019) had the Québécois singer snapping up headlines with no new musical material to speak of. For Loved Me Back To Life, her 25th disc, the five-time Grammy winner recorded songs written by Sia Furler, Daniel Merriweather and Ne-Yo—three young artists whose tracks were brought in to help facilitate Dion’s latest musical makeover. Although the songs are unlike any of the high-profile power ballads Dion is known for, her five-octave range is still very much front and centre. The biggest change is in her voice, which is now a raspier, grittier instrument, and more nuanced than her delivery on Oscar-winning hits such as Beauty and the Beast and My Heart Will Go On.

Q: One of your new tracks, a cover called At Seventeen, is known for being a feminist anthem. What prompted you to record it?

A: It filled so many unexplained, emotional holes from my childhood—especially during my school years. I don’t want to say I have scars, but when I sing it [live], it is for many people like me, who have suffered so much because they felt awkward and unwanted when they were younger.

Q: When in 1975, she had to go to TV talk shows to promote the track because many radio stations wouldn’t play it. Has much changed since then?

A: It’s a tough world. The kids today have a lot of pressure on them. I’m thankful that I’m not starting my career now. The demands on women are too much. When you look at models, they all have to be a certain height, weight and shape. This thinking influences a generation to the point where they get themselves sick because they feel like they have to be in a mould. I have to watch everything that my kids are seeing! I hope it will start to change but I would never start a career today because you have to have it all: you have to know how to sing, know how to dance and you have to look perfect. It’s impossible.

Q: In the past, you said you grew up feeling unattractive. When did all that insecurity begin to fade?

A: When I was 12 years old and I finally got to the stage. Then I was on TV and my career took off and that made me realize that everything is not about looking good. [Before fame], I never wanted to leave my parents’ house. Kids are very cruel with other kids. If you aren’t seen as cool or the A+ student or you don’t have the cool look—with the hair, the jeans and shoes of the moment—you don’t fit in. I was very skinny. I had teeth problems. I didn’t feel secure. I didn’t feel like I fit in.

Q: Your name is attached to an in-the-works Maria Callas biopic that you have been wanting to star in. Is this going to happen?

A: There are some very serious people not letting go of the project but I’m not letting go, too! I remember reading a book about her and seeing her photos and thinking that I looked like her. She was beautiful in her own way and tried to make herself as pretty as she could. She had long, hard features.

Q: Callas is seen as such a tragic figure. How have you been able to relate to her story?

A: I want to give her the love she should have had. From day one, her mom told her that she would never have any success and she’d do nothing worthwhile because she was, in her mom’s words, “fat and ugly.” This is the opposite way that I grew up. The fact that [Aristotle] Onassis used her for her fame and left her for [Jackie Kennedy] and then even made fun of her afterward—it broke my heart.

Q: There are many new artists who do not want to look like they are labouring for their audiences, for fear of looking like “try-hards.” Are you a champion of the try-hard?

A: Yes. For over 30 years I’ve been in this industry [because] I’ve been trying too hard and I don’t think there are many people around that are able to have this kind of longevity. To have a hit is one thing. To be disciplined enough to commit to a career is another. It is beyond talent. You can’t pretend not to care.

Q: One of your new songs, Incredible—produced by Ne-Yo—is straight up R & B. Do you feel he pushed you into a sound that you hadn’t explored before?

A: Nobody pushed me. All the young [producers] on this album—I call them kids because of their age—proposed things to me, and we met halfway. Because of people like [Ne-Yo], I do feel like I am having a second wind in my career. I can’t record The Power of Love or My Heart Will Go On again and again. I’m not Britney Spears but I do need to freshen up my sound—which I think we’ve done.

Q: Do you still carry a list of people with whom you want to sing a duet?

A: I have an unending list but at the top of it is still Annie Lennox. We’ll wait and see.

Q: Phil Spector once told Entertainment Weekly that he owned many of the recordings he did with you during your Falling Into You sessions. He said he was going to release them one day.

A: It’s true. He does have the songs. He bought them. He owns them. I would prefer to [re-sing] them the way they should be sung because they were [recorded] in a very difficult environment. I don’t think the recordings as they are right now do justice to the songs, my voice, his work or the musicians who were there the night we recorded them. It was a hard session. I can’t believe you brought that up. I feel like I’m 105 years old because it feels so long ago.

Q: For the new disc, you recorded an updated version of Stevie Wonder’s Overjoyed with him. Did you learn any new vocal tricks?

A: We recorded separately in different studios but we had many conversations on the phone about the direction. Music is a different world, you can’t learn anything—it is more of a secret language that you get or you don’t. When you talk to jazz people, they live their music, it’s not decodable. Stevie has a particular way of singing and playing piano. [Dion sings lyrics to Master Blaster: “Everyone’s feeling pretty / It’s hotter than July!”] His way is so unique that you can’t learn a thing. It’s just an amazing privilege to listen.

Q: What is the hardest and highest note you’ve ever hit?

A: That would be in All By Myself—it’s still hard to sing today. I was in Montreal and David [Foster] was in Malibu and called me to ask me if I could [attempt] the song in my register so I sang it to him over the phone and he was happy. Not too long after this, I get to Malibu to record the song and he tells me he’s rearranged it three notes higher. He said, and I’ll never forget it, “Don’t worry if you can’t sing it, Whitney Houston is in the studio next door.” That gave me the pipes that I needed.

Q: Speaking of Whitney Houston, in 2008, it was reported that you were scheduled to record a duet with her. Did it ever happen?

A: No. But I was on YouTube and someone posted a video montage that used both of our voices. I actually took a minute and thought to myself, “Have I been in the industry so long that I forgot about singing a duet with Whitney?” I actually felt bad because I grew up listening to her. She was my idol.

Q: The most famous duet you’ve ever done is with Barbra Streisand. She recently said, “As you get older, people expect you to fail.” Does this ring true at all?

A: The people who come to see me, they love me beyond my songs and don’t want me to fail. When I make a mistake on stage, they are like “Oh my God, are you okay?”—they are always on my side and they care for me. When I lost my dad and I cried on stage and told them, “I’m not going to give you guys a good show”—they never said I did a bad job. The industry is different—you can’t please everyone, so I don’t try to.

Q: Lucien Bouchard once called you Quebec’s greatest ambassador. With that in mind, Amnesty International just declared Quebec’s controversial charter of values as a limit on fundamental rights that further stigmatizes vulnerable women. Do you agree with Amnesty?

A: It’s a very delicate question to answer because I’ll hurt some people and please others but you have to have an opinion. For me, it’s not about the veil—it’s beyond that. I’m not against what people wear but if you go to the hospital, and you are in Quebec and we have embraced you and opened our country for you to live in a better world, you have to adapt to our rules. If the doctor is a boy or a girl, you’re gonna see the doctor that [is] sent to [treat] you. You can’t just say, “My religion doesn’t permit me to see a woman or a male doctor.” That’s the problem for me. If I’m going to see a doctor and he is gay, I’m not going to have a problem with that. It should not be an issue.

Q: Yet you’ve stood up for women’s causes throughout the years.

A: Of course! It’s just that these women who practise the things they believe in have to adapt to our country. They have to not change our laws. Because you have a lot of Anglican or veiled women in a school—you can’t just take off the [Catholic] cross from the walls, or take down Christmas trees. If I go live in their country and have to be veiled, I will.