One giant leap for art: The sculpture that's headed to the Moon

The Vitae Project wouldn't be the first piece of art on the moon. But if everything goes right, it may be its most ambitiously beautiful.

At the centre of Omaha Beach stands Les Braves, a striking abstract monument dedicated to the Americans who liberated France during the Second World War. Commissioned by the French government to celebrate the 60th anniversary of D-Day in 2004, Les Braves is made up of 17 stainless steel columns. At its peak it towers nine metres above the English Channel. It is French artist Anilore Banon’s most famous work.

But lately Banon has been focusing on something much smaller in scale. Her latest sculpture, Vitae Project, will likely weigh no more than one kilogram and have a diameter of 1.2 metres—the perfect size for a space payload heading to the moon.

Vitae Project is a “science and art project that seeks to unite people across the seven continents,” according to its website. “People are really scared and worried around the world,” Banon says. “I think that with adventures and gestures of hope such as this, we can fight all this fear with hope and energy and positive action.”

If it does succeed in making its way to the lunar surface, Vitae would not be the first art on the moon. It has never been confirmed by NASA, but Moon Museum is a small ceramic wafer measuring 19 millimetres by 12 millimetres and bearing drawings by 1960s artists Andy Warhol, Claes Oldenburg, David Novros, Forrest Myers, Robert Rauschenberg and John Chamberlain. Warhol drew his initials, which also look like a penis or a space rocket. Supposedly, the creation was secretly attached to a leg of the Intrepid landing module and left on the moon during Apollo 12 in November 1969.

Then, in August 1971, Commander David Scott of Apollo 15 placed Belgian artist Paul Van Hoeydonck’s 89-millimetre-tall aluminum sculpture Fallen Astronaut in a small crater near his lunar rover. It’s a miniature representation of an astronaut in a space suit and lies near a plaque carrying the names of 14 astronauts who had died. NASA does recognize that work’s presence on the moon.

As for Banon’s piece, “The hard work has been melding the engineering with the art,” says Shaun Whitehead, a British aerospace engineer and Vitae’s technical director. “Something we’re not normally limited by in engineering is the requirement to make it a beautiful sculpture.”

During daylight on the moon, the sculpture will look like a cocoon, enclosing one kilogram of shape-memory alloy as the lunar soil beneath captures solar energy. At night it blossoms, as a dish-shaped base unfolds and reveals what Banon calls the “T pole,” which resembles a tree and represents, as she sees it, “a lot of different people all in different directions but all united at the base.” The two tallest people hold a 10-watt laser, which will pulse a few times each night and be visible from Earth with a pair of binoculars.

Whitehead says the bottom dish will act as a “thermal radiation shield” at night. It will reduce the rate at which the heat leaks away from the rocky lunar material beneath it, in the same way a survival blanket prevents body heat from radiating away. The solar energy that is stored by the soil during the day will be the sculpture’s power source, allowing it to open during the night, much as earthly moonflowers do, Whitehead points out.

Banon has been working on Vitae for more than five years. In 2012, a model of Vitae achieved its first flight to the edge of space attached to a weather balloon. This month, the project will be entering phase three: deployment on board the International Space Station (ISS) in order to test its materials and properties in microgravity.

Nanoracks is a private U.S. company that provides research space aboard the ISS and has been working alongside the Vitae team for more than three years. “Getting something from concept on the ground actually to the International Space Station is very complex,” says Mary Murphy, an internal payloads manager with Nanoracks. “Essentially you’re taking something and putting it up on a rocket, which has inherent risks, and then you’re putting it into an environment that’s basically the equivalent of a five-bedroom house inhabited by roughly six people.”

The model going aboard the ISS, referred to as V-III, will be brought by a crew member to the Cupola—the same room where Chris Hadfield filmed his music videos—so it can be tested with the picturesque Earth as its backdrop. Once the testing is complete, Whitehead says, the final version of the sculpture will be ready to go to the moon by year’s end. Whether it will get a ride there at that time is still up in the air. 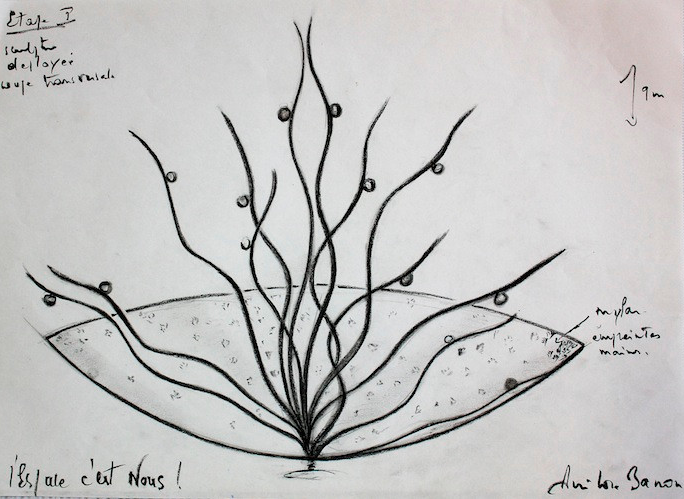 An artist’s sketch of the Vitae Project. (Anilore Banon)

The Vitae creators have their hopes set on the Google Lunar XPrize, a competition challenging teams of space engineers to land and operate robotic spacecraft on the moon’s surface by the end of 2017. The first group to do so wins a $20 million prize, and could potentially be a route to the moon for Vitae. Whitehead says he has developed strong links with Astrobotic, a team that once appeared to be leading in the competition but has since dropped out. “If we’d gone with them we’d just be a payload, so all we needed to do legally was to satisfy them that we were suitable for their mission,” Whitehead says.

Florida-based Moon Express now appears to be in the lead for the XPrize, having become the first private company to receive permission to land on the moon last summer. Moon Express plans to make its trip by the end of 2017 flying aboard the Rocket Lab Electron rocket, and could very well bring Vitae along for the ride. “As soon as the Electron looks as though it’s going to fly, we would go back to Moon Express,” he says. “We’ve got fairly strong ties to almost anybody who might be going to the moon.”

Even so, there’s no guarantee Banon’s work will end up joining Warhol’s and Van Hoeydonck’s on the moon. Astrobotic has pushed back its moon mission to 2019. The Electron rocket carrying Moon Express has yet to be tested. The time, money and regulations required for the Vitae team to buy their own rocket launch could put them well beyond the 2017 mission they desire.

As the Vitae team awaits the hoped-for final leg of the journey, Banon will continue to exhibit her work and collect handprints for the sculpture. The dish at the bottom will have digitally reduced handprints printed on it as a symbol of humanity. The artist aims to collect one million handprints of people from all six continents, collecting the prints during exhibits and through online submissions.

While there are many technical obstacles to putting artwork on the moon, Banon and Whitehead say they have yet to face any ethical concerns. “I think it could help a lot of people fight the weight of the fear on Earth at the moment,” she says. “When I put Les Braves on the shore of Omaha Beach, there were people that said, ‘Why don’t you just leave the sand the way it is?’ But then the veterans that fought there told me, ‘Please do it, because we have nothing that could remind us of our life there.’ ”

“To simply land on the moon and have something that connects us with the moon makes us look up at the moon and, in so doing, look back at the Earth,” Whitehead says. “I think that’s a fantastic thing. It’s a way for us to stop being so insular and fearful and to have this as a great symbol.”