Amid a high-profile rap beef, his OVO Fest had the potential to deliver a defining moment. But Drake let his show do the talking. 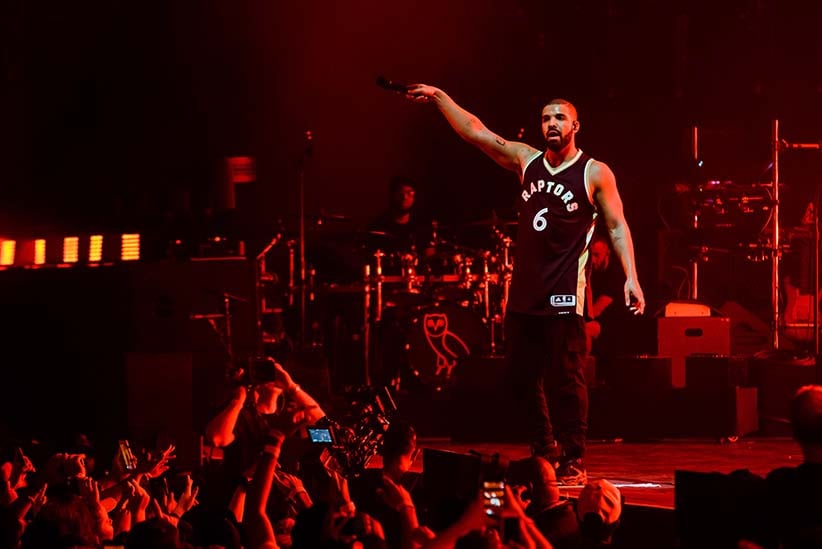 Drake performs during the 2015 OVO Fest at Molson Canadian Amphitheatre on August 3, 2015 in Toronto, Canada. (Photo by George Pimentel/Getty Images)

The lights went down, and up went the taunts, unbidden, with middle fingers raised: F–k Meek Mill. Then a projection of an iPhone battery, charging up from 0 to 100 per cent, real quick. The hometown son, leaping out to spit Charged Up and Back to Back, two diss tracks aimed at the throat of the Philadelphia interloper, and his city shouting back every word of those songs that had been released online, quietly, just one week ago—and which have logged more than 27 million listens since. Insulting memes flashed behind him in a gleeful carousel, each one more clowning than the last. And the crowd cheering rapturously, as Drake stood and soaked in the adulation, flanked by twinned photos of 73-year-old Norm Kelly, the Toronto city councillor who  managed to wade into a high-profile rap rivalry.

It was the Drake-iest possible way to light a match in the dry heat of the ongoing contretemps between the rapper from the Six and Philly’s bulldog emcee Meek Mill, who accused Drake of having a ghostwriter pen his lyrics, a cardinal sin according to the hip-hop commandments. And it was how Drake chose to kick off the 2015 OVO Fest on Aug. 3, his annual love letter to the city from whence he came, a sporting showcase of hip-hop’s biggest names all swathed in secrecy, each one a testament to his growing influence in the game.

So right away, OVO Fest—usually a peaceable showcase of Drake’s idols and peers—signalled that it had the potential to finally become Summer Jam, the annual bash put on by influential New York radio station Hot 97. That’s hip-hop’s ur-festival, after all, and the one to which OVO Fest has often been compared, though one thing has always been missing: the smell of a gas leak that could spark up at any moment. Summer Jam’s tradition of rap beefs has led, over the years, to manufactured, illogical conflicts between artists of minor consequence, but also, most famously, to the start of the Jay-Z and Nas rivalry. It was one of rap’s biggest recent beefs—one that proved to be fertile ground for both their careers and a fallowing New York rap scene—and for many, was won with a diss track so searing that its title, Ether, has become a hip-hop term of art, synonymous with destroying your enemies on the mic.

The pre-show buzz fuelled that potential all the more. A photo had made the online rounds of Drake at rehearsal wearing a shirt emblazoned with his rival’s face and the words FREE MEEK MILL. And, most thrillingly, rumours flew among those inside his camp that the night would be topped by the debut of a new diss track, produced by his closest beatmaking associates, called Three Strikes, which threatened to K.O. Meek Mill at what has become one of the genre’s most-anticipated nights. If properly executed, it had the potential to be a game-changer delivered by a rapper still improbably dogged by allegations of softness. The timing was perfect. The stage was ideal.

But after the lights went up and the throngs trickled through the horribly designed Molson Amphitheatre exits, it was clear: There would be no such track. Instead, OVO Fest was a night much like its past iterations over the last six years—its special guests included Atlanta’s robot-warbler Future, the Happy-and-Lucky hitmaker Pharrell Williams, and divisive megastar Kanye West. But that sent a message far stronger than anything a traditional diss track could have sent: Look at my works. Look at my friends. Look at my power. This fight is over.

Related: What the outrage over Drake’s ‘The Six’ nickname says  about Toronto

OVO Fest 2015 was a revealing look at Drake in wartime, something we’ve never truly seen in his career (despite a comical scuffle between him and the peaceable Common, and also the kosher beef between him and the Jewish rapper Matisyahu). On this night, Drake eschewed microphone missiles, the traditional tools of his sport. Instead of launching a new game-ending track, he let the concert tell the story: the story of a world that Drake has built behind him, his squad, his peers, and the city that adores him. This is how the world’s most famous rapper parries offensives from would-be Huns: not with calculated, full-throated aggression, but with symbols and totems, and the size of his influence.

The night’s secret performers—the highlight of the festival, every year—spoke for him. There was Future, descended from Atlanta’s weirdo Dungeon Family, who’s helped affirm the oddball South’s place as hip-hop’s exciting centre; there was Pharrell Williams, the studious and stylish geek who worked his way into becoming a pop golden child; there was Kanye West, who rose with pink polos and backpacks and has gone on to redefine hip-hop’s sonic boundaries at multiple turns. They are outsiders and nerds and prodigies who eschewed machismo for musicality and in so doing, turned swaths of the rap game into their personal fiefdoms. Drake is one of their legion. It sent a loud message that Drake’s sphere of influence wasn’t just high profile, they’re of a same mind. And for all of Meek Mill’s squawking, he’s been largely marginalized, his claims receiving little support in the rap universe at large. They are Drake’s squad; these kings are in the king’s court.

And each of them paid tribute to Drake’s love for his city. “This guy holds your city and your country down in a way that’s so unbelievable,” Williams said after his set. So Drake turned the sold-out amphitheatre into a phalanx built out of loyalty: “No one can take what we built,” Drake cried out early in his show. “I promise you, I will never, ever, as long as I have a voice, I will never let this city down.” Sure, Meek Mill had never cast any aspersions on Toronto itself. But on this night, Drake redefined the terms of the conflict: If Drake is to sell Toronto to the world, then an insult to Drake is an insult to Toronto. OVO Fest was loud, thousands-strong proof that his message resonated.

So there was no Ether. There didn’t need to be. With his squad having graced the stage and his city behind him—rather literally, standing between the two pillars of a city councillor’s back-to-back image—Drake didn’t need to say anything more, or do anything more, than be Drake to have won this night. And this fight.