At the seventh annual State of the Drake, a king defends his crown against an uprising both nascent and imagined 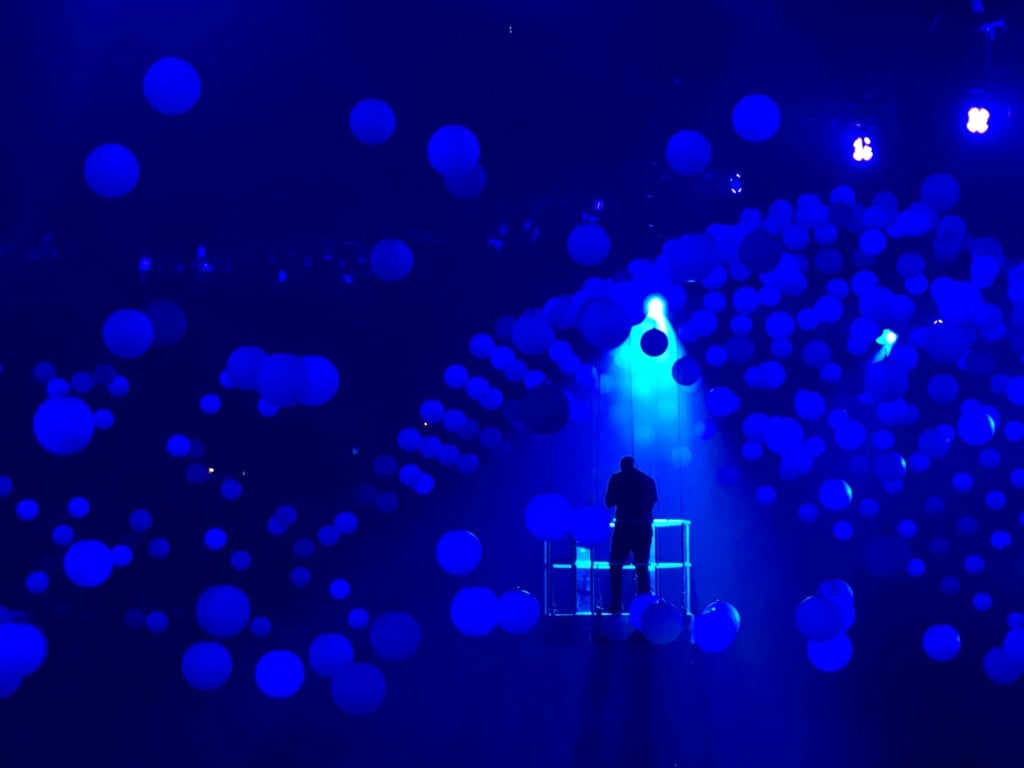 It may be hard to remember that the first song officially released from Drake’s fourth studio album Views was something of an incongruous choice. That’s in part because of the fact that the menacing, leering track “Summer Sixteen” came out, despite its name, in the cold heart of January; it’s also incongruous because the song kicked off the album cycle, yet never actually found its way as one of the 20 tracks on Drake’s critically divisive, commercially blockbuster, and certainly overlong ode to the city and seasons of Toronto. On “Summer Sixteen”, he took shots at Meek Mill, his ghostwriting accuser, in a beef that hasn’t so much fizzled as it has been glossed away; he also fired warning flares at Toronto’s new generation of rappers who might consider coming for his title. “I’m out here looking for revenge, all summer sixteen,” he wailed. But listening to the song now, the decision to cut it makes sense: it feels too specific, too of a place and time, for a project that Drake declared, on the album itself, was “already a classic.”

But the atmosphere inside Toronto’s sold-out Air Canada Centre on Sunday and Monday night at a two-evening OVO Fest—the seventh annual concert starring the self-billed Six God and a litany of surprise-guest friends that have previously included everyone from Jay Z and Stevie Wonder to Kanye West and a reunion of the group TLC, sans Left Eye—suggests that the song may be the best reflection of 2016’s still-evolving version of Drake. OVO Fest has long doubled as an annual temperature-taking State of the Drizzy, and this year, as the monochromatic children of the city milled about in the ACC—summer-kissed in either only pristine white or exclusively slim drapey black, with only the occasional zippered olive or OVO-sanctioned gold—a paranoid kind of revenge was in the air.

It was written on the merch, emblazoned in angry orange Thrasher-style lettering on $55 shirts from OVO’s vertically integrated fashion line. It was imbued in the location choice: for the first year, OVO Fest exchanged the summery open field of Molson Amphitheatre for a closed-off, chilly cement stadium date as part of a North American concert tour—a move that made some fear that this would mark the end of the surprising and thrilling OVO Fests as we knew them to exist. (Surprise appearances by Kanye West, Rihanna, Popcaan and French Montana, plus the weekend’s listed headliners Future, Snoop Dogg, Wiz Khalifa, and a roster of Caribbean stars, allayed that fear somewhat.) And then, in case anyone missed the message, Drake’s show began with “Summer Sixteen”—after OVO associates Baka, Roy Woods and dvsn took the stage to kiss the ring—with a dark stage firing surveillance Klieg lights into the crowd before a screen lit up in white flames to make clear what the Six God was looking-looking-looking for: REVENGE. 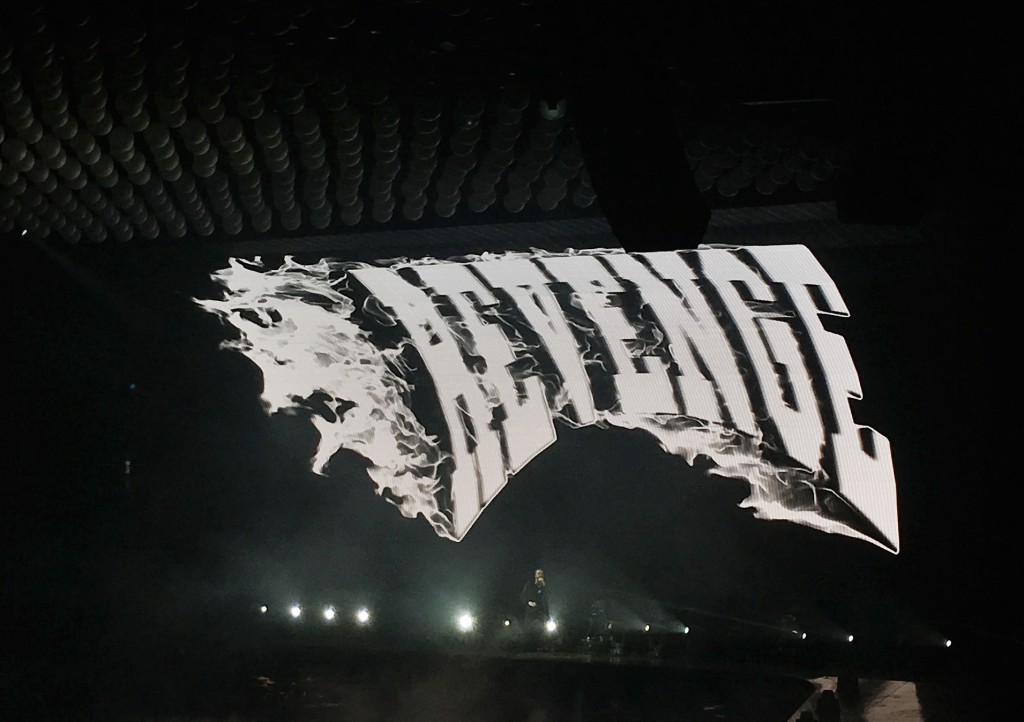 If revenge feels like an odd animating force for a superstar rapper who has basically made all the right moves on his way to the very pinnacle of the hip-hop game, you may not know the degree to which paranoia has long fuelled Drake.  He’s been concerned with his place in the hierarchy, and the according trust issues and suspicions of betrayal at every turn, since the very beginning of his rise: “I really can’t see the end getting any closer/But I’ll probably still be the man when everything is over,” he mused on “Over,” from his 2010 debut album; “I learned Hennessy and enemies is one hell of a mixture,” he considers, on 2011’s “HYFR.” That longstanding paranoia, too, sparked the aggressive rapping Drake that brought us the creative fertility of If You’re Reading This You’re Too Late: “They never told me when you get the crown/It’s gon’ take some getting used to/New friends all in their old feelings now/They don’t love you like they used to.” And yet his desire to be “in it for the long haul,” as he rapped on “6 God,” is at loggerheads with a rap game where the churn at the number one spot is immense and frequent. This isn’t Lear, a king in his winter, suddenly snapping and seeking out enemies to scrap with after a long period of peace; this is a man who has always needed all the praise and has become the king, in part, because of his vain, nervous tics.

MORE: With Views, Drake’s global vision goes beyond the Six

Even the first OVO Fests could be viewed now as an act of paranoid power-massing, inviting big-name guests so he could impress his city by association until his own star power was just as mighty. And, to be clear, OVO Fest 2016 proves that his star power now certainly is. For as long as the Sunday ACC crowd shrieked at Rihanna’s arrival on Sunday night and again on Monday, and for as long as Monday’s audience chanted “Yeezy” like a koan when Kanye West appeared as a surprise guest for the third time, the feeling was clear that Drake was the main event. (Indeed, on Monday night, after Kanye left the stage, those “Yeezy” chants quickly turned into “Drizzy” chants.) This development is somewhat new; while he’s always been a charming stage presence, he has not always been able to carry the space of a huge stadium stage alone. But this year’s guest performers appeared for no more than a small clutch of songs, and Future—ostensibly the show’s co-star—was limited to a 25-minute set of his raspiest, most energetic hooks to cede time to Toronto’s very own. In the show’s first half, Drake rattled off a fiery 12-minute set of snatches of chart-topping songs and big-name guest verses, punctuated by a scratch-down of the “0 to 100” lyric “I got all the hits, boy”—and it’s a point well taken.

But OVO Fest’s overriding message of paranoia also sends signals to would-be competitors—both the ones jockeying for his crown in the rap game overall, and for the ones after his throne in Toronto. Just one week before OVO Fest weekend, Tory Lanez—one of the leaders of a so-called New Toronto, widening the lane that Drake opened and taking aim at their forerunner—put on an electric show at the WayHome festival just 90 minutes outside of Toronto and continued his campaign of passive shots at Drake. “Legend has it that when one king falls,” he shouted, dripping with sweat as he perched on the palms of his audience on which he surfed, “another king must rise.” Indeed, his remix of Drake’s “Controlla” leaves the original in the dust. Meek Mill, too, inconveniently refuses to go away, and leaks in Drake’s own camp allowed him to respond to the insults from “Summer Sixteen” minutes before the song was even released. The invaders may not quite be at Drake’s gates, but they’re surely massing up.

So what’s a mega star to do, when rap’s throne is so tenuous and he’s only really just arrived to find attackers on two fronts, including in his own backyard? It’s just as Views‘s first song suggests: Keep the family closer, on a weekend where he now firmly holds a monopoly on the rap world’s attention.

He was teasing and coquettish (“It’s the Six. You deserve to be spoiled”). He was confrontational and urgent (“I didn’t come to play games tonight”). He was possessive and jealous (“Toronto’s giving me loyalty and I don’t got to pay for it,” he ad-libbed during the song “9”). In main surprise guests Kanye and Rihanna, he presented the two artists most important to him, collaborators who both burnish and complement him. In short, OVO Fest 2016’s Drake was an extension of everything he has fashioned his stardom from, and he performed it to two nights of sold-out stadiums—a feeling that was both claustrophobic and communal. 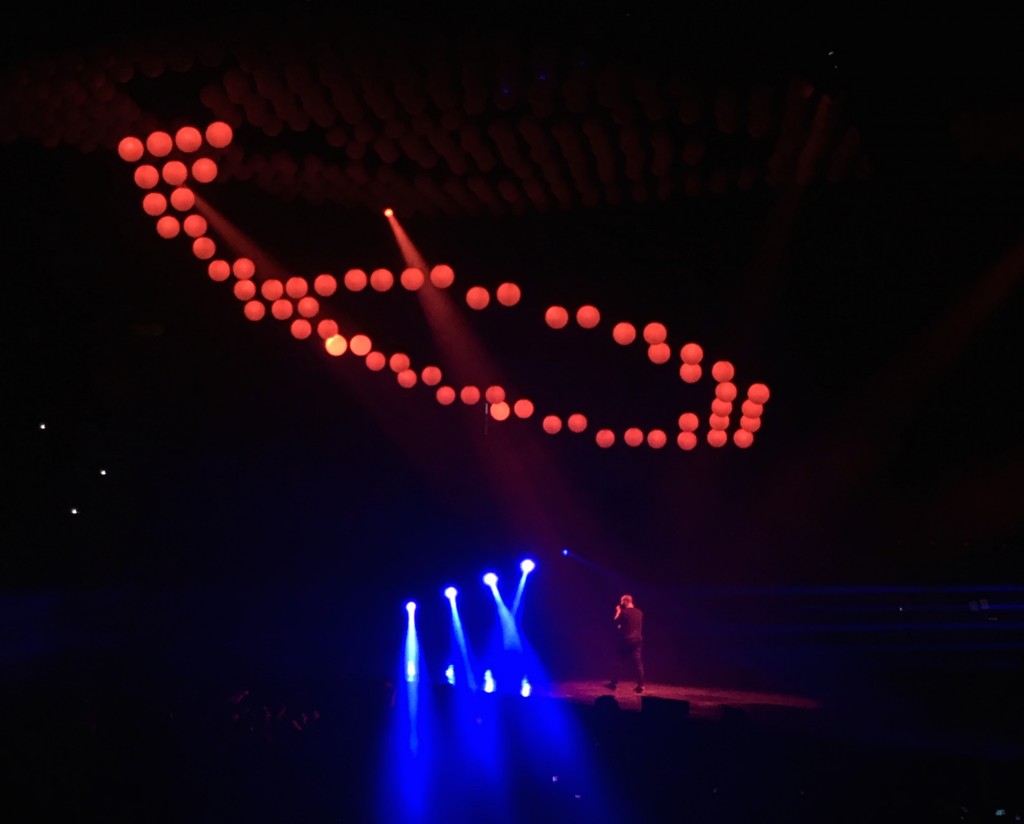 We’re firmly beyond the portion of the Drake era where there’s anything more he’s allowing you to know about him other than through his music. (It’s like he raps: “I do my own propaganda.”) And so OVO Fest 2016 finds the festival becoming the cloistered cathedral for the Six God faithful, the partisans who circle the OVO Fest date like it’s Christmas and accumulate these shows like badges. It’s for them that Drake started off both shows with the hasty introduction “I don’t need to tell you my name and I don’t need to tell you where I’m from, because I say it every five seconds.” It’s for them that Rihanna’s performance was most satisfying, because her long-sought appearance at last after seven years of fests felt, for the audience in the ACC, like completing a collection. It’s for them that Kanye West came back for what now feels like an expected show—which is really pretty remarkable on its own—reminding the city each time of Drake’s place in the rap pantheon. (It’s also them who would be thrilled the most by the news that, as Kanye teased, the pair have a collaborative album in the works.)

So with this year’s OVO Fest, the Six becomes smaller. The paranoid king pulls his coterie in tighter by focussing on his main constituency and his core colleagues. It’s certainly one way to make sure one’s kingdom stays sure, in this summer sixteen of mistrust and suspicion—the emotional fuel that has long proved, and continue to prove, that Drake’s still hungry for more.