A music-school nerd, Pallett is the go-to collaborator for Taylor Swift, Arcade Fire, the National Ballet and more 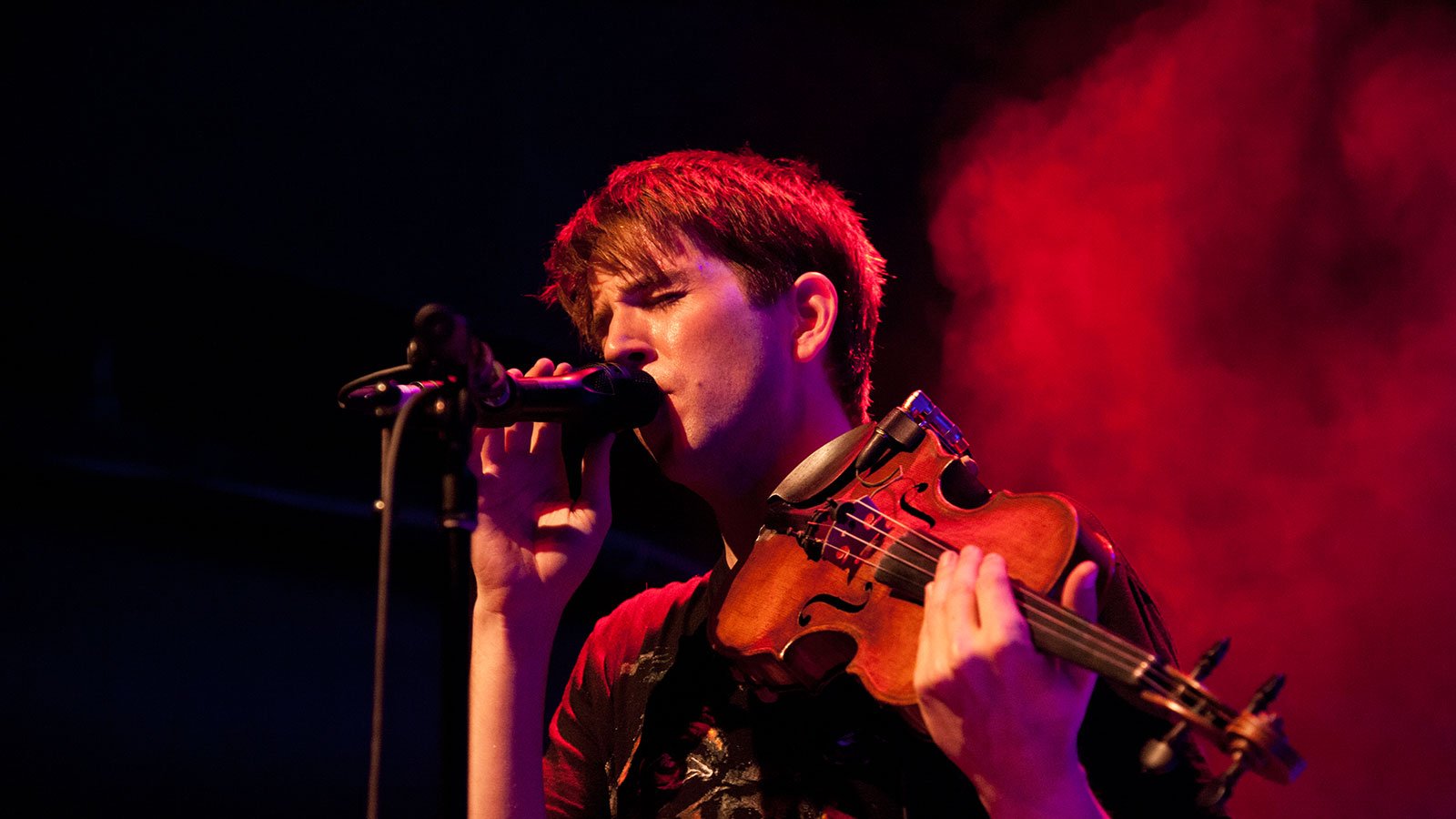 In July 2004, Owen Pallett didn’t know he’d landed the break of a lifetime: writing string arrangements for an obscure Montreal band called Arcade Fire, for their soon-to-be released debut album, Funeral. At the time, Pallett was performing with many Toronto acts and playing his violin shows—solo performances in which he used loop pedals to create surprisingly complex symphonies onstage. And yet, he recalls, “I was quite literally starving. I had absolutely zero dollars.” That’s when Stuart McLean, host of CBC’s The Vinyl Café, walked into a tiny bike shop in a back alley off Spadina Avenue in Toronto where Pallett was performing. Blown away, McLean immediately hired him to work on the radio show and join a Vinyl Café tour in northern British Columbia and the Maritimes that fall. “Some nights,” McLean told Exclaim! magazine, “you could just feel the audience erupting with joy; they had never seen anything like that, and it was one big collective ‘wow.’ ”

That good fortune was a blip compared to what happened next. Funeral was released in September 2004; its instant success caught everyone involved off-guard. (The album has sold almost one million copies to date.) Arcade Fire invited Pallett to be their opening act for their first proper American tour in January 2005, and to join them as second violinist, with Sarah Neufeld, for their set. Right from the opening night at the Great American Music Hall in San Francisco—when he showed up on crutches, having broken his ankle—Pallett had audiences enraptured with his one-man display of virtuosity and charisma. His debut album—which McLean had encouraged him to make, featuring songs Pallett wrote for the Vinyl Café tour—sold thousands of CDs in hand-assembled packages at the Arcade Fire merch tables. If Pallett hadn’t been opening up for what turned out to be one of the best bands in the world, he would have blown them off the stage.

In 2006, Pallet won the inaugural Polaris Music Prize, beating out favourites such as Metric, Broken Social Scene and K’naan. He was commissioned to write an orchestral piece for Canada’s National Ballet. With Arcade Fire’s Will Butler, he was nominated for an Academy Award this year for the score to Spike Jonze’s Her. He’s done string arrangements for country pop queen Taylor Swift, electro-disco legends Pet Shop Boys and nu-metal act Linkin Park—as well as for his considerably lesser-known Canadian peers, such as Caribou and Great Lake Swimmers, for whom his rates are considerably lower. (“I’m pay-what-you-can,” he says. “Always.”)

If that’s not enough, superstar producer Brian Eno (Talking Heads, U2), who cited Pallett’s 2010 album Heartland as his favourite record that year, has contributed to Pallett’s new album, In Conflict, out this week. The highly in-demand Eno doesn’t produce In Conflict; he’s content to support Pallett’s vision. The likes of Coldplay need Eno’s help (he produced their last three records); Pallett doesn’t.

Pallett is no longer starving. But he’s far from comfortable. He says that while writing and recording In Conflict, he struggled with “how I’m necessarily going to monetize this collection of songs; it’s a different, weird group of songs.” (This, from a man who titled his Polaris-winning album He Poos Clouds.)

Music, and the accompanying uncertainty, has long been part of the plan. At age 12, growing up in Milton, Ont., Pallett wrote the music for a video game designed by one of his older brothers. In 2000, he went to the University of Toronto to study composition. He soon fell into what was called the “Torontopia” scene, an extremely fertile point in the city’s musical history. It was a participatory culture revolving around ideas, not necessarily musicianship. Pallett happened to have both. His first time fronting his own project was playing guitar in a trio called Les Mouches, which delivered fragile beauty disrupted by uncomfortably abrasive explosions. Richard Reed Parry of Arcade Fire has called one particular Les Mouches show “one of my favourite shows I’d ever seen—ever, of any band.”

The Arcade Fire connection brought calls from all corners, not just from that band’s obvious peers, such as the National. Though Pallett embraces the avant-garde, corporate clients get quality customer service. “I’ve never shied away from syrupy,” he shrugs, “nor do I really criticize other arrangers; I can’t think of one I don’t like. But there is a tendency with certain arrangers to really have a style. I want to go into an arrangement situation and act as an extension of the artist.”

Pallett is part of a generation of singer-songwriters and bandleaders who are music-school nerds first and foremost: harpist Joanna Newsom (who studied at Mills College in Oakland, Calif.), Dave Longstreth of the Dirty Projectors (Yale), and guitar shredder Annie Clark of St. Vincent (the prestigious Berklee College of Music in Boston). They all apply their formal education in composition to their intricate take on rock, pop and folk forms—genres where it’s nearly impossible to find someone who can read sheet music, let alone write it.

Even in that crowd, Pallett is unusual in the way he juggles a love for Shostakovich and respect for the songcraft behind Katy Perry; he recently outlined the latter in a popular post he wrote for Slate, using music theory to dissect Perry’s 2010 hit Teenage Dream. His voracious musical appetite embodies a digital generation of music listener, the kind for whom musical tribes and allegiances matter less and less. It’s why Carl Wilson, the former Globe and Mail critic, asked Pallett to contribute an essay to his recently re-released book Let’s Talk About Love: Why Other People Have Such Bad Taste; Pallett joins Nick Hornby, Sheila Heti, James Franco and Nirvana’s Krist Novoselic to expand on Wilson’s theories about how musical tastes define us—or not. “Owen is a segment of a certain independent musician who once would have been more stubbornly avant-garde, and now has a more eclectic approach,” says Wilson. “He’s a particular subset, bringing his classical training to that music.”

Pallett’s mirror image is Nico Muhly, 32, a Julliard-educated New York composer and friend. Both ride the pop-classical divide with ease. Pallett pulls more toward pop—though Finnish violinist Pekka Kuusisto commissioned him to write a concerto performed at both the Barbican Centre in London and by the Toronto Symphony Orchestra. Muhly premiered his first opera, Two Boys, at the Metropolitan Opera last year; he’s also arranged songs for R&B king Usher. “We’re both obsessive,” says Muhly. “We’re simultaneously addicted and wary of technology. We’re both interested in pattern music that breaks the pattern, making something that feels like it should obey a set of logical rules, and then smudging it.” They routinely share drafts of works in progress. “Even if I give Owen the highest praise,” says Muhly, “he’ll disagree 180 degrees. I’ll say, ‘That was really beautiful,’ and he’ll say, ‘I didn’t mean for it to be beautiful!’ ”

Muhly has a similarly catholic approach to musical genres. “I think a lot of this stuff happened with the death of the record store—a really useful thing,” says Muhly. “In the early ’90s, there was a Ravi Shankar and Philip Glass album called Passages. Where in the traditional record store would that have been found? One of the things that was especially true with classical music, if you were in the bigger stores, is that they were kept in a separate room, as if you were buying porn. Now, it doesn’t matter at all. If you are online, all the contributors to an album will be hyperlinked. Anyone who had played on Heartland, you could find what else they had done. It’s journalist and record-store shorthand that we call Arcade Fire indie rock, but it doesn’t have to be called anything.”

Last fall, Pallett signed on for Arcade Fire’s Reflektor tour, after years of maintaining an arm’s-length distance to focus on his own music. Because of the way that band can afford to tour now, he says, “I knew I’d have time to myself and time to go to the gym and eat well, and I’d be able to reposition, mentally, for my own solo music.” The subject gets his neuroses firing, unmasking the self-lacerating Internet lurker behind the confident artist. Taking the job, he says, would mean “I wouldn’t get so bent out of shape if somebody posted a negative YouTube comment, because I’d be thinking about how everyone would see that comment and now no one is going to buy tickets to my show and I won’t be able to make rent, you know? People who aren’t pro musicians don’t know how crazy-making it is to write songs for a living, to sell yourself for a living.”

In Conﬂict ﬁnds Pallett reuniting with his Les Mouches bandmates, making his new material sound more visceral than esoteric. Pallett has a conflicted relationship with beauty. He knows people come to see a classically influenced solo violinist sing nice songs; that’s certainly what appealed to the Vinyl Café audience way back when. He now also plays more keyboards than he does violin; there is still, of course, plenty of orchestration. “There’s a part of myself always resisting the urge to make pretty violin music,” says Pallett, “not that I have that urge—I don’t. I’m so glad there are other people out there making that music so I don’t have to.”