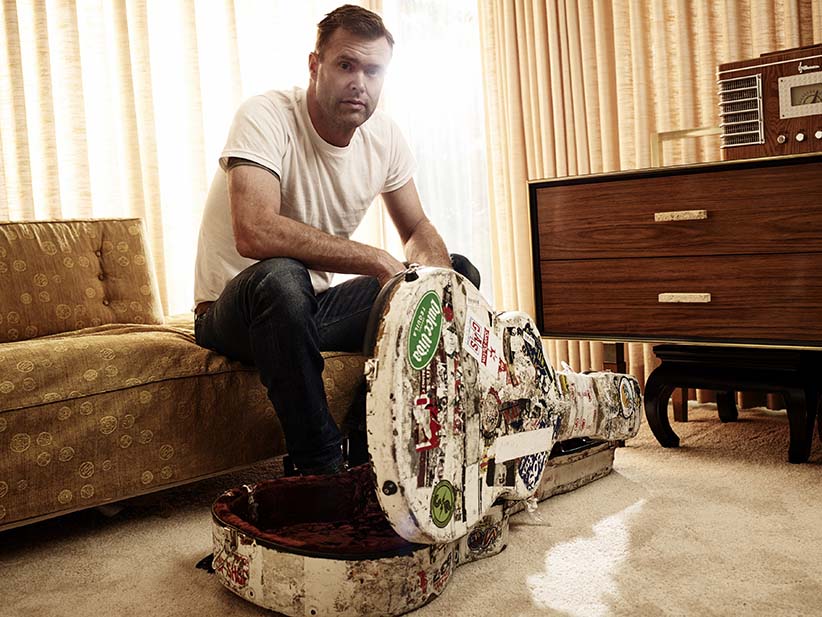 Corb Lund named his long-time band “The Hurtin’ Albertans” one hungover morning, and their theme song is a lament: “Too much oil money, not enough booze.” The group’s tenure has coincided with their province’s prosperity, although they’ve always avoided the kind of brash, shiny bro-country that now dominates the genre’s airwaves. On their new album, Things That Can’t Be Undone (released Oct. 9), their stripped-down approach seems even more apt. Lund’s last studio album, Cabin Fever, hit No. 1 in Canada, and its successor brings a sharp, 1960s-flavoured rock together with his trademark lonesome, folky ballads and prairie stomps. Whether Lund sings with a downcast drawl (S Lazy H, about a man losing his ranch) or a knowing smirk (Washed-Up Rock Star Factory Blues, about a man losing his record deal), his sharply etched sketches throw Albertan uncertainty into relief.

Lund, who describes himself as “politically à la carte”—he knows Laureen Harper socially but won’t stump for her husband—spoke with Maclean’s about diversifying (both his music and an economy), the curious state of Alberta’s politics, and being an unwitting ambassador for his province.

Q: Your songs have so many narratives that seem very specific to times and places—it’s not generic sloganeering.

A: I think there’s power in that. If the artist has an authentic enough voice, there’s a lot of common ground that transcends the specifics of the song. When I was a kid, I got Bruce Springsteen, but not because I know what it’s like to live in New Jersey. I could tell from the spirit of his music that he knew what he was talking about and was presenting something that was part of him.

Q: Do you have people far away from Edmonton telling you that they really “get” Alberta?

A: Yeah, surprisingly, I’ve had people say they’ve been motivated to go there. I should be paid by the tourism board!

Q: Is your song S Lazy H, about an Alberta ranch, based on a true story?

A: It’s an amalgam of three or four stories I’ve heard, but it’s a pretty common theme: [there’s] a family-run operation and multiple siblings, and one or two of them stay home and work on the farm and build it up. The other one does something else entirely different, and then when they become 40, they think, “I want half the farm.” One of the problems is compensating the kid who’s spent his adult life working on the place. Another complication is that, often, one kid wants to keep farming it, and the other kid will want the money—half of what it’s worth, right now. You have to sell half the place to pay out the one kid, and then sometimes [it’s] no longer big enough to raise one family on, so then it’s either sold or somebody’s gotta get a job in addition to running the place. That’s sad.

Q: You’ve spoken before about the split in Alberta between the ecologically minded environmentalists –

Q: Right now, the price of oil is dipping, and so is real estate; do you have a sense that we’re hitting more of a flashpoint, with more tempers flaring?

A: Yeah, it remains to be seen whether this is a cycle or this is the new normal. We need to diversify, because the second oil’s gone, there’s nothing left but cattle and the Rockies. We’ve got a lot of brainpower. [In 2006, Ralph] Klein gave everybody a cheque for $400; before that, he sent out a survey to Albertans [asking], “We’ve got a surplus. What should we do with it?” My answer was, “Invest it in alternative energy technology and incentives.” Eventually, if the human race is going to continue to grow, we’ve got to get off petroleum. So when that time comes, unless Alberta has gone out of its way to diversify itself, we’re going to be like the Maritimes and no cod. I’ve been saying that forever, and nobody listens, because they’re all s–theads. The politicians are all on a four-year cycle, so all they care about is next term.

I’m a generational landowner; we’ve had a ranch since 1898, and my mom is really active in trying to keep oil and gas exploration out of there. I’m all for that. In the big picture, 100 per cent we should get off oil; we need to all drive Teslas eventually when it’s feasible . . . There are ridiculous displays of wealth, and it’s gross. People have trucks that are too big, and three quads, and all that sort of stuff.

But having said that, it’s a bit unfair to blame Alberta for having the oil when a lot of transfer payments that pay for health care and all kinds of social programs come from the oil. And all of us are to blame—I drove here in a car, and my iPad and phone are made out of plastics and come from petroleum, and the tractors that grow the hops that brew our beer run on diesel fuel. We’re all complicit.

Q: With all the focus on cars and trucks in country music, there aren’t many songs about hybrids.

A: Not yet! We’re working on it. My drummer’s got a big farm there, and he’s really into alternative [energy]. He’s got a big array of solar panels, and he’s actually giving power back to the grid. There are actually some progressive agriculture people out there; you don’t hear about them much, but they’re there.
To me, it’s a race against time, whether we can sort that out before we’ve completely screwed up the planet. It’s an endless topic of discussion in the [band’s] van.

One thing I do think is we, as a country, should be selling our oil for more money. Exxon or whoever comes in negotiates a deal . . . and the Norwegians get way more per barrel than we do, and the oil companies always threaten to leave, and I say, “Let ’em leave.” It might slow down the economy for a little while, but the oil’s not going anywhere. We don’t need to get it all out of the ground Monday morning, and that seems to be the premise of how everybody behaves. The Norwegians have a trillion dollars’ worth of investments. They got that from Peter Lougheed in Alberta. We had a thing called the Heritage Fund, and that was our idea, and they took it and ran with it, and we’ve blown ours—it’s brutal.

Q: You’ve got an NDP government provincially, but there’s still support for Harper on the federal level.

A: That’s voodoo. I don’t understand it. Whether or not the NDP does a good job remains to be seen. If you think back four years ago, a bunch of Wildrose people who got elected that are farther right than the Conservatives, so what that tells me is that people are absolutely sick of the Tories, because they’ve been in power 44 years, and that’s never good, no matter what the ideology is, right? It’s possible that having elected a sweeping NDP provincial government, they’re [now] hedging their bets a little bit.

Q: To what extent did the scenario you singing about in Sadr City, about fighting in Iraq and then being sent to Afghanistan, arise from speaking with soldiers?

A: I made a record a few years ago called Horse Soldier; it’s got a number of military history songs, and we started getting a ton of military people out to the shows. I met an army captain in the States; he told me the story of this battle that he was in, called the siege of Sadr City, a suburb of Baghdad, and that was the first big flare-up of sectarian violence after “Mission Accomplished” was announced. I guess it was pretty intense.

I’m very careful with those songs because I don’t really believe in hitting people over the head with preachy messages. Some people write a lot of political stuff all the time and do have an axe to grind, but I don’t. The more I read, the less sure I get about world events.

Q: In your song You Talk Too Much, a loudmouth carrying a gun is advised to pipe down because, “There’s people around here who carry concealed.”

A: That whole song is a protest against the boastfulness of our society. So many people now think if they’re loud enough, they have the right answers. A lot of the most competent people I know in any walk of life are the least mouthy, so the gun thing is one example. There’s a Vince Lombardi reference in the song; football’s a good example because they make a standard tackle and celebrate like they won the Super Bowl. It’s crass. Lombardi has a quote: “If you reach the end zone, you should act like you’ve been there before.” I think society lacks humility these days–more than they did 50 years ago.

Q: Which gets more difficult when people carry guns, doesn’t it?

A: Well, yeah—this is another issue that I’m kind of confused on. In the old West, they say people were awfully polite to each other because you didn’t know who was packing. So there is that element to it. I’m not advocating that as an option; it’s just a story, right?

Q: The album ends with Sunbeam, a song about the loss of a young person that seems to offer a ray of hope.

A: That’s about a niece that we lost a couple years ago; she got sick. She was a good one. I didn’t expect [the song] to be ever recorded; I just wrote it for myself, and to play at the funeral. There’s a really fine line between something that’s emotionally moving and something that’s just kind of cheeseball, and you don’t always know as a writer, so I thought it might be a bit much for public release. But the guys heard it, and we tried it with a producer, and it turned out pretty good. Since we’ve been playing it live, a few people have said they’ve been through similar things and they appreciate it, so I guess it was a good move.