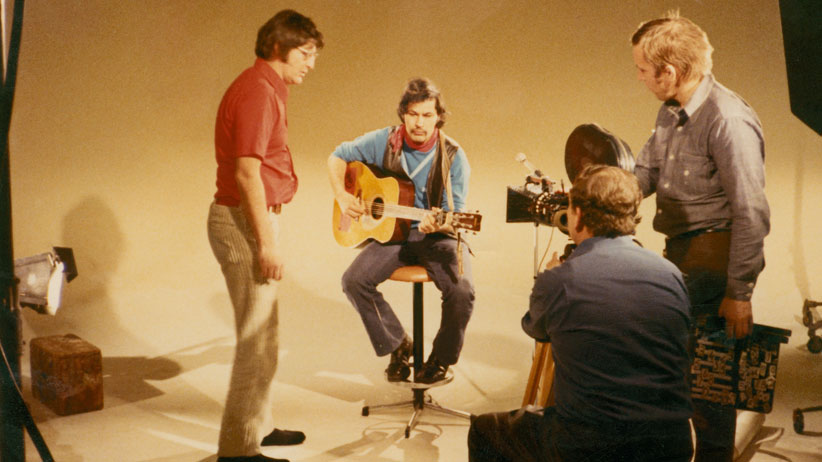 In Canadian music history, Kevin Howes, a.k.a. DJ Sipreano, is the real miner with a heart of gold. Seven years ago, the Vancouver record collector assembled the Jamaica to Toronto compilation, showcasing long-forgotten soul tunes and reggae records from Canada’s Caribbean community in the early 1970s; released on Seattle label Light in the Attic, it was an international success, led to five subsequent albums in the series, and coaxed back to the stage singers just as talented as Otis Redding or Sam Cooke and session musicians who would have been right at home in Alabama’s Muscle Shoals or Kingston’s Studio One—most of whom were long retired. Now he’s turned his attention to music even more marginalized: that of Aboriginal Canadians, recordings that rarely left CBC Radio libraries or the communities where they were made. Native North America Vol. 1: Aboriginal Folk, Rock and Country 1966-1985 is not just a worthy exercise in cultural anthropology, it’s also a collection of incredible music that doesn’t even need the accompanying 120-page book to convince you of its greatness.

What was the seed for this?

In the mid-1990s, I was a DJ in Vancouver, where I had residences at places like the basement of the Hotel Georgia, playing soul and funk and reggae and psychedelic rock—anything we liked that spoke to us that we wanted to share. That all came out of hip-hop music and sample-based culture, learning that the records we liked were made up of amalgams of old tracks cut in the ’60s and ’70s. By a product of geography and some mentors I had, I got focused on Canadian music beyond the charts, beyond Gordon Lightfoot and Anne Murray and the Guess Who, to artists who for whatever reason—lack of financial support, even racism—weren’t able to get their music shared. I started digging into the roots of Canadian music, back to the late ’50s, which is the birth of the Canadian music industry.

There weren’t even recording studios here before that.

No, exactly. I started travelling across the country and looking for source material for DJing, and I found these records and fell in love with them and wanted to learn more. Looking online or in the Canadian music history books and magazines, I wasn’t able to find out anything about these artists. How could there be no information out there? Their music was clearly ahead of its time and/or didn’t have the right opportunity to reach people. Maybe things never made it out of Winnipeg or Vancouver. There were all these micro-regional scenes across the country.

Who were some of the artists that started you on this path? Who really got under your skin?

Willie Dunn was definitely a breakthrough artist for me. It harkened back to watching NFB documentaries in high school, and even in elementary school, and being exposed to a NFB film he made in 1968 called The Ballad of Crowfoot. We were able to spend some time with Willie Dunn while making this compilation. Unfortunately he passed away in the fall of 2013. He was a true trailblazer for indigenous people across the country. He was very vocal. I found an old issue of Maclean’s: June 1970, on the cover is Pierre Trudeau, and there’s an article about Willie Dunn, with the headline: “Why this man is making people nervous.” These songs are truly revolutionary. They spoke to the times and the indigenous experience in this country, and the resurgence of traditional values and customs that had been coming back into vogue that had been suppressed and destroyed for years through colonization and residential schools, the decimation of culture.

What, if anything, do you think the legacy of these artists has on today’s Aboriginal Canadian music?

In 2014, with what’s going on today—corporate dominance, the destruction of our environment, the conservative political landscape—it’s like nothing has changed. These songs are just as pertinent today as they were when they were recorded. They show the roots and the trailblazers. It made a lot of what we have today possible in the indigenous community. There is more infrastructure for indigenous music now that didn’t exist back then. In the ’60s and ’70s, folk and rock and country were the popular forms of the day; today’s it’s hip-hop and electronic and fusions of sounds. I can really see the lineage. If Willie Dunn was alive in 2014, he’d probably be a hip-hop artist and rapping and sharing his music and culture that way.

Some might find it ironic that an American company is documenting Canadian music history so effectively.

I’m a non-Aboriginal person myself, but the music has affected me in a very positive and deep way. I’ve dedicated my life to uncovering undocumented Canadian music history. I take the time and effort and it’s my passion and I love doing it.

But is it your job? Does this pay you enough? This must have taken an enormous amount of time.

I would like it to be my job. I’d like to put a callout to the CBC to open their archives to me, to reanimate and re-engage this still-vital culture. It brings together cultures and generations and eras of technology. It fosters such goodwill among people. We don’t celebrate it enough. It’s often relegated to the dustbin, or an archive nobody has access to. With the Jamaica to Toronto project, I remember applying for Canada Council grants to get the still-active musicians on the road and touring across the country. We got denied. I remember applying to the NFB to get some sort of funding to work on a documentary about this incredible musical migration of Caribbean people to Toronto. I was very frustrated. But this is a labour of love for me.

Listen to the songs. For an artist like Willie Dunn, he empowered people, made them feel proud to be of Aboriginal background. He strengthened people from the diverse range of indigenous cultures. Willie Thrasher, who went through the residential school system and was stripped of his culture and removed from his family, to him, music was a very healing and therapeutic way to get in touch with his culture and re-establish contact with his elders.

Why are the heaviest bands heard here from the Far North?

That was an eye-opener for me. In my total ignorance, I didn’t think that a Black Sabbath record would travel from Montreal to Salluit in northern Quebec and that it would influence musicians there. But knowing that music from that era affected people from around the world, regardless of how remote their location was. Some of these groups are still celebrated in their communities. Sugluk and Sikumuit are still known in northern Quebec and Nunavut, but it’s such a shame that all this great culture is left to wither away while the messages are still so pertinent.

There are no women here. What’s up with that?

That’s very interesting, and obviously something I’ve thought about. Buffy Sainte-Marie was an incredible influence at the time and a dominant force in the music and a real trailblazer incorporating folk and rock music with indigenous culture and history and ceremony. We didn’t include her because we wanted to focus on lesser-known artists. There was also Alanis Obomsawin, who is a filmmaker and musician as well. She was involved in curating a lot of the stages at the Mariposa Folk Festival [in the 1970s], and did some music that reached into classical realms with traditional drumming and chanting and singing. We weren’t able to work with her on this project, unfortunately. She has some plans to do something with her music on her own. Otherwise, records [of female artists] just didn’t exist. I’ve been researching this for years, and it’s just a comment on the times, unfortunately. Women have always been underrepresented in different styles of music.

There’s a really good-looking trailer for this album. Did you shoot a lot of material? What are you going to do with it?

We shot that footage in 2013 in Ottawa, Nanaimo, B.C., and Mistissini, Que., with the three Willies: Willie Dunn, Willie Thrasher and Willy Mitchell. We did it to make a short to promote the album and raise awareness. We shot extensive interviews with those three artists. If we can get some financial support, it would be incredible to extend that into a feature-length documentary. There’s more than enough history there.

One of the other projects you worked on produced an Academy Award-winning documentary, Searching for Sugarman.

I was in Detroit interviewing Rodriguez for the liner notes [for Light in the Attic’s reissues of his work], and [the filmmakers] had just started the documentary process. Even Rodriguez was skeptical at the time about the documentary. He was a very private individual. So live concerts, documentaries, further reissues, all these things will gain momentum. We just need some traction to start. Hopefully a project like this can shake the ground a bit, too. You never know what will surface. For Jamaica to Toronto, we did six albums [in total, including the initial compilation]. For Native North America, there’s currently an album in production that will be a companion release to this, focusing on the “lower 48” [all states except for Alaska and Hawaii]. I’m working on a Willie Dunn anthology next. We tried to raise the bar really high with this one. It was five years in the making.