Q&A: The joy and the triumph of Mavis Staples 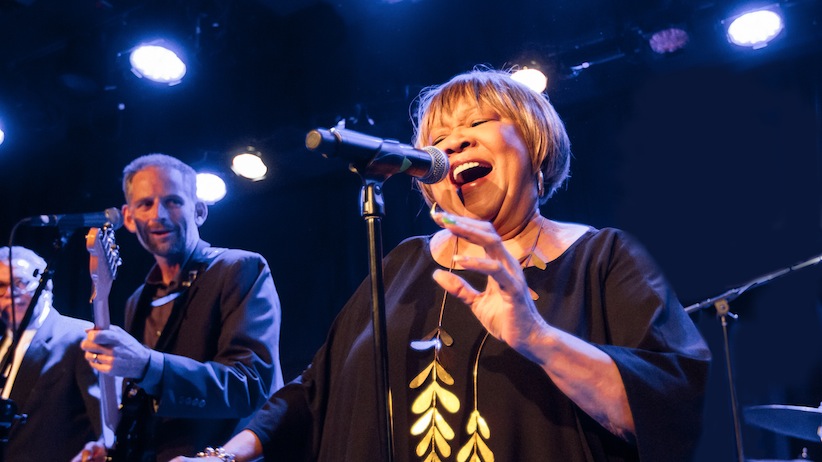 It’s no longer unusual for an artist in her 70s to find new audiences and a whole new lease on artistic life: Witness the recent career rebirths of Buffy Sainte-Marie, Leonard Cohen and others, dating back to Johnny Cash’s comeback in the 1990s. Mavis Staples was the star of the Staple Singers, a gospel group that started out playing churches, marched with Martin Luther King Jr., had million-selling gospel singles, signed to Stax Records in the late ’60s and had Top 5 hits such as I’ll Take You There and Respect Yourself. Staples was a friend of Mahalia Jackson, Sam Cooke, Aretha Franklin, Curtis Mayfield and even Prince; Bob Dylan once told her father, bandleader Pops Staples, that he wanted to propose to Mavis.

Her most recent chapter began in 2007, with a new record deal and We’ll Never Turn Back, an album of civil rights anthems produced by Ry Cooder. It got the best reviews she’d had in 35 years; it was followed by a live album and two albums produced by Wilco’s Jeff Tweedy, one of which won a Grammy. The 76-year-old is constantly touring, with a band that features her sister Yvonne as one of three backing vocalists, and the last two years has seen a flurry of activity, including Greg Kot’s biography I’ll Take You There, the posthumous release of Pops Staples’ final album (completed by Mavis and Tweedy), the re-release of the 1965 Staple Singers live album Freedom Highway—and now a full-length documentary, Mavis!, directed by Jessica Edwards, which opens in theatres all across Canada this week. (Dates at bottom of Q&A.)

Q: Does all that activity and interest of the last two years surprise even you?

A: It’s really been busy. And we just finished a new CD. I think it will be released in February. We don’t have a name for it yet. I’m stepping out of my comfort zone. Not totally, but there are all different songwriters writing for me, like Neko Case. Every song is a different songwriter, new songs they wrote around the way they know Mavis. I’m really enjoying it.

A: No, this is M. Ward. Jeff Tweedy and I just had a divorce. We had two good [records], and then the record company wanted me to move on.

Q: In gospel music, there’s a popular refrain: “Can I get a witness?” You’ve been a witness to so much, so many pivotal moments in American history, and now, film audiences are getting to witness your life, just a year after Greg Kot published a book about you. Did you have any qualms about letting these biographers into your life?

A: I have put it off for so long. In fact, I think I made a few enemies, when I let Greg Kot [of the Chicago Tribune] do it. I had so many friends at the Sun-Times in Chicago, and [Stax historian] Rob Bowman in Toronto. I had several people asking me to write, but I just wasn’t ready. I didn’t think I wanted to do that. Finally, I gave in. I thought, “I’m getting older, and I really need to document what my family has done.” And I’m glad I did, because I love it. Greg Kot is a dear friend, and also Jessica Edwards is great and she sought out all kinds of stuff. She surprised me. I sat in the theatre [at the premiere] in Austin, Texas, and I just boo-hooed. I just couldn’t stop crying! I’m very grateful, and appreciate that it’s being seen in Canada. I have lots of friends in Canada!

Q: In Kot’s book, you say, “People would come up crying and put money in my hand. I didn’t understand. I thought I was hurting them. Mama said, ‘Your singing makes them cry happy tears.’ ” From personal experience, I can tell you that’s still the case at your live shows. Have you spent your whole life consoling people crying in your presence?

A: Now I realize that people were just happy, feeling good. The Staple Singers went to Japan, back in the 1960s, when Japan was completely traditional. No one spoke English. I would look out into the audience, and they were crying, even though they didn’t know what it was we were singing! It’s the feeling. It’s the way I listen to Miriam Makeba. I don’t know what she’s sayin’, but I can feel it. When I finished high school, my father said, “Okay, Mavis, we can go on the road full-time now!” I said, “Daddy, I don’t want to. I want to go to college. I want to be a nurse.” He said, “Mavis, baby, you’re already a nurse. Don’t you see? You make people feel good. They feel better because of your music.” I thought, “Yeah, I guess I am.” So I didn’t get to college.

Q: Do you travel with a box of tissues, just in case people start crying around you?

A: Oh, no! (laughs) No, I might need the tissue for me! I do it to myself, sometimes. I get happy! The first time, I think I scared my [new] band, because they’d never seen anything like that before. I was singing this song and, all of a sudden, it hit me, the spirit. I remember the looks on their faces. I said, “I’m sorry, y’all, I didn’t mean to act ugly, but when the spirit hits you, you got to move, you got to cry, you got to make some noise.” I think I converted them all now!

Q: They’re a great band, both individually and together. After years of being in a family band, you pull something out of these new guys, and I don’t know what their spiritual background or their family background is.

A: I think the Word just resonates. If you’re any kind of good human being, if some truth comes through to you, you just accept it. One guy in the band, the first show we did, everyone was in the dressing room, and I said, “So, uh, anyone have anything against prayer?” And he walked out of the room. I thought, “Oh my God, is he an atheist?” And someone else said, “Oh Mavis, he’s just shy.” I kept going and did it the next three times, and then he stayed for prayer, and it was all right. See, I didn’t know them. They were brand-new to me. Plus, it was a bunch of white guys! So I said, I know the black boys I had before them. They went to church, so I never questioned these guys what their religion was or what. But I find them all to be really, really beautiful spirits. I’m happy with them. We’ve been together nine years now.

Q: In the film, you talk about the younger generation’s interest in your music. I couldn’t help but notice that all the younger people in your life: Jeff Tweedy, your current band, and, based on the footage in the movie, most of your fans—are all white Americans. What, if anything, does that mean, do you think?

A: That means a lot. That means the world to me. That means my message is getting across to everybody. I had a show in Chicago, and a lot of my cousins came. They came to the dressing room, and one of them said, “Mavis, where did all these white people come from?” I said, “That’s our audience now!” We gather everybody. They didn’t understand, because the last audience they saw was all black. They hadn’t been to one of our shows in a while (laughs). I’m honoured, and so happy that we draw the whites, the blacks, the Hispanics, a whole nation of people coming to see us.

Q: There’s a lot of interest from younger audiences in older soul music and older musicians. What do you think they come to see? Why are they drawn to the music? What’s in it for them?

A: I think they want to see and hear a truthfulness, something from the heart. These kids, you can’t fool them. They want to know what makes you tick and if you’re going to be able to move them. My father told me, years ago, he said, “Mavis, if you sing from your heart, you will touch people. Because what comes from the heart, goes to the heart.” I’ve never forgotten that. That’s my method. I live what I sing about. I’m a blessed, blessed old lady. 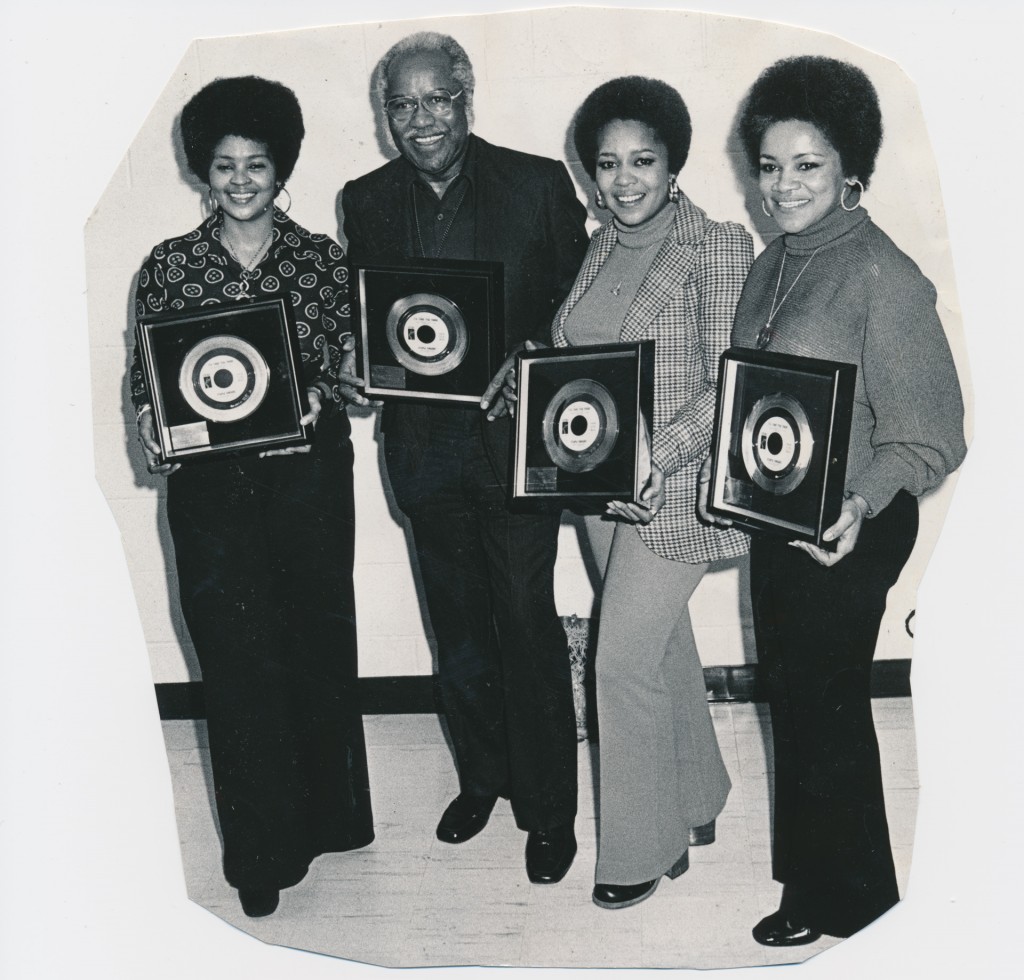 Q: In the film, there’s a scene where you’re looking at old pictures with your sister Yvonne, and you say, “We were singing gospel and we were sexy up there.”

Q: In every fashion period, you’re always dressed to the nines.

A: Oh, thank you! I have to dress according to my age now, you know. I can’t go too far out there.

A: (laughs) Why not, you’re right! Joan Rivers didn’t stop! Another thing too, Michael, is that, well, I’ve gained a little weight. I’m not as streamlined as I used to be. I try to get things loose-fitting so I can fool people into thinking that I’m not as chubby as they thought I was.

Q: How long did this film take to get made? The film shows you with Levon Helm, who died in 2012.

A: These kids, they started working on this before I even knew it. They were in the audience and filming stuff with little bitty cameras. But yes, probably almost three years. I told my manager, “I’m tired of telling my story over and over! I’m tired of telling people how the Staple Singers started.” But it turned out just fine.

Q: My favourite lyric on your last record, One True Vine, is: “Every step of the way, I found grace.” What does that mean to you?

A: Just what it says. Every step of the way. When Jeff Tweedy gave me that song—he’s just a dynamite writer, he just knows me so well, he knows what Mavis needs to make her happy. I move along in my life, and things that happen to me, when I get down, I know what to do to get myself back up. It’s grace. Grace brought me so far.

Mavis! opens in Toronto at the Bloor Hot Docs Cinema on Nov. 13, in Saskatoon’s Broadway Theatre and Vancouver’s Vancity Theatre on Nov. 14, at Waterloo, Ont.’s Princess Cinemas on Nov. 17, at Winnipeg’s Cinematheque on Nov. 20, Victoria’s Cinecenta on Nov. 22, Guelph, Ont.’s Bookshelf Cinema on Nov. 25, and Edmonton’s Metro Cinema on Dec. 1.