Scotland's kings get the Shakespeare treatment 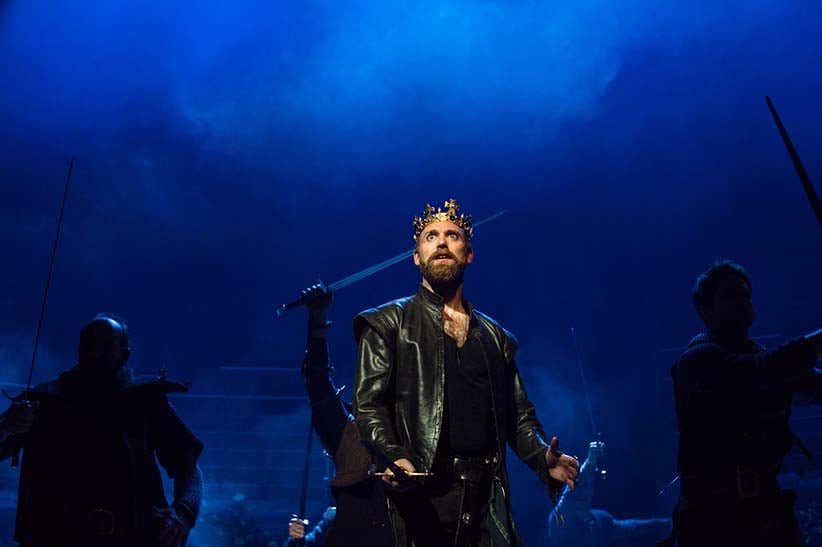 Black Dinner, Red Wedding: Scottish royal history is twisted and bloody enough, as George R.R. Martin has openly acknowledged, to inspire even Game of Thrones episodes. But for various reasons, notably a deep Calvinistic loathing of theatre, there are no Scottish history plays dating to the era of Shakespeare’s English history cycle. Enter playwright Rona Munro, stage left (definitely but not stridently), in the days before her country’s 2014 independence referendum. She had been musing about how “much of what we understand about English history came from Shakespeare’s plays,” and how the English, in fact, derive so much of their understanding of themselves from those works. “But in Scotland we had no equivalent.”

Her response was the James cycle, three plays about three Scottish kings—James I, James II and James III—covering the years 1406 to 1488, roughly the span of Shakespeare’s Henry plays; the first major historical character on stage is actually a foul-mouthed King Henry V of England. Staged by the National Theatre of Scotland at Toronto’s Luminato Festival until June 26, the plays can be seen as individual episodes or in a glorious seven-and-a-half-hour binge spread over 11 hours. Either way, they are brilliant.

The cycle is partly a knowing nod to Shakespeare, another writer who recognized great raw material when he saw it. Consider the Jamesian deaths alone: James I, assassinated in a sewer he couldn’t escape through, because it had been blocked off to prevent tennis balls from being washed away; James II, blown up by one of his own cannons; James III, murdered after losing a battle to forces led by his son. (James IV, later to become the last monarch in British history to die in battle, surely deserves a Munro sequel.) And the Jacobiad works like the Henriad too, riveting audiences to their seats with the intensity of the family drama within the historical sweep. (Not to mention timely interjections of often savage humour: After an appalled James I confronts one of his relatives with the crime of nailing horseshoes to the hands and feet of a petitioning woman, the laird’s mother shrugs and says, “Well, she could be annoying, that Ada Stewart.”)

MORE: Celebrating 400 years of Shakespeare, a man out of time

In their humour, self-deprecating and ironic as well as black, and even more in their self-consciousness, the James plays are very Scottish, in a way Canadians instantly identify with. Both nations share a feeling of being perched in a literal attic above larger and richer countries, alternately feeling ignored and terrified of being noticed, and always aware of their own conflicting reactions. When a Scottish woman is sent to advise James I’s English bride of what she’ll encounter in her new home, she cheerfully runs down her country—“we’re poorer than beetles in a rotten log; if you do get an apple, it’ll have a worm in it”—until she notices the queen-to-be is totally convinced. Then the northerner, affronted than anyone other than a Scot has anything negative to say about Scotland, switches over to praise: the dancing’s better, the skies are higher and clearer. A little sun, responds the relieved Englishwoman, and it will be all right. “Ach, no…no, can’t promise sun, sorry.”

The history for the most part is nuanced and subtly handled; the trilogy is no clarion call for a Yes vote in the referendum. The deaths of various credulous earls of Douglas, visiting under safe conduct, at the hands of royal officials—as was the case at the infamous Black Dinner of 1440—or personally killed by the king himself, can be hard to follow in Scottish history, but Munro crafts a tidy narrative. The spilling of royal blood, on the other hand, is (usually) kept offstage: the kings and their families are both the core of the dramas and symbols of a collective under construction, a people choosing which bricks to use in their national project.

That’s why director Laurie Sansom loves the Luminato theatre inside Toronto’s decommissioned and far-from-renovated Hearn generating station. “We looked all over Edinburgh for a warehouse-like space to stage them and couldn’t find one. Here we have our first purpose-built stage, allowing some of the audience to be right on stage, able to fill in as MPs during the Parliament scenes, with box seats literally cut out of shipping crates—plays about building the nation staged in a building under construction.” Sansom’s direction also subtly moves the action from medieval times to somewhere closer to contemporary: James I is in medieval dress and opens with folk music; James III is part medieval and part modern in costume, while its opening song (albeit performed by bagpipe, drum and accordion) is Lady Gaga’s Born This Way, more a wry acceptance of Scottish quirks than a boast. In Edinburgh before the referendum, notes Sansom, an Englishman, and in London afterwards, “you could feel the audience sussing out and dealing with some very complicated laughing at Scots and English.”

By James III: The True Mirror, Sansom and Munro are reflecting Scottish history back at contemporary Scots, primarily through Queen Margaret, the third of three foreign queens who change their husbands and affect delicate political questions for good or ill. But Margaret is Munro’s heroine, as far as the playwright has one, a Danish immigrant from “a normal country, with reasonable people,” who has come, improbably, to love Scotland. Near the end of the cycle she addresses the audience directly: “You know the problem with you lot? You’ve got f–k-all except attitude.” The message, from Munro and from history: stop worrying, whatever you decide will be just another moment in the life of the nation. Kill the Douglas or don’t kill the Douglas—just choose.