The story of Target Canada's demise, and the employees who lost their jobs, will be the subject of a play to be staged in one of the chain's abandoned stores 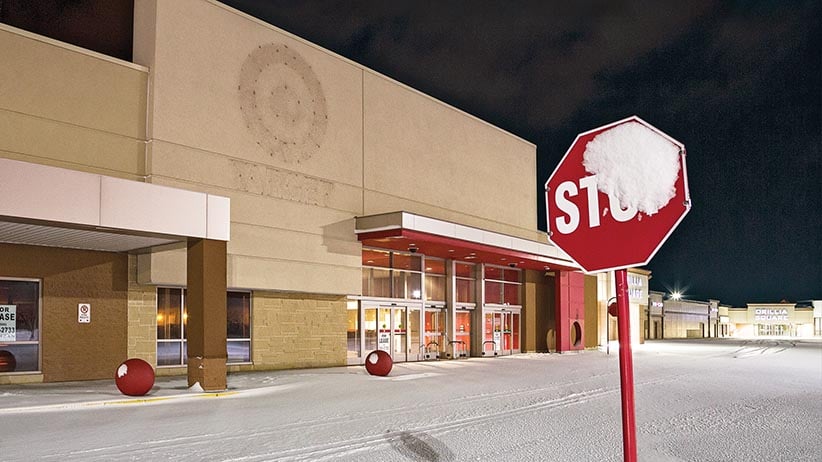 A former Target store in Ontario. (Photograph by Johan Hallberg-Campbell)

Much has been said and written about the arrival and subsequent abrupt departure of American big-box retailer Target from Canada. It was a story full of drama, its corporate ins and outs explored in depth by analysts and business journalists, but few might have expected it to be the inspiration for actual theatre. But Robert Motum, a 24-year-old from Oshawa, Ont., is out to turn it into just that: an immersive theatre experience.

Community Target is a production described as an “examination of the ‘still-unfolding’ story of Target’s short foray into Canada, derived from interviews with former employees of the megastore,” that will, if all goes to plan, take theatregoers inside an abandoned Target retail space to tell its story.

Motum, a recent graduate of Aberystwyth University in Wales, pitched the concept to Toronto’s Outside the March theatre company, which stages unique, large-scale immersive theatre experiences as part of its Forward March program that looks for homegrown Canadian stories. The pitch was accepted late last year, and the company is currently working with Motum to get the show off the ground.

What is it about Target that might make for good theatre? When Target retreated from Canada, the move was analyzed and examined from an economic perspective, says Motum, but he felt there was something missing—that is, the narrative of “the 17,600 employees who were losing their jobs.” Motum acknowledges that silence might have partly been due to a reported gag order placed on Target employees in the final days of its operations in Canada, but nevertheless he feels there remains a need to “give more insight into who these people were.”

Though still in the early stages of development— a preview performance is not expected until August—the production is intended to be what’s called a “promenade performance” through an empty retail space, where the audience is guided through the experience, hearing from actors as they go. Site-specific immersive theatre has become popular as an artistic experience. New York City’s Sleep No More, for example, which opened in 2011, allows audience members to explore a hotel, either at their leisure or by following one character for their entire visit, thus making the experience unique each time. In Community Target’s case, Motum describes it as “participatory performance”—any “improv” would “occur in audience interaction.”

Immersion in the physical space is important to telling the Target story, the play’s creator argues. “Part of my inspiration for it is I would pass by these massive, empty voids of retail space and they’re just sitting there, sucking the life out of the shopping malls, affecting smaller mom-and-pop stores—stores that rely on the traffic of the anchor stores,” Motum says.

He wants to fill that space with something creative and cathartic—the latter of which is what interested Outside the March in the project initially, says Sebastien Heins, the theatre company’s creative marketing director and core acting company member.

“I’m thinking of it as a sort of coming together after the storm for the employees, to hear their stories and create a community hall type of environment—a town hall of experience based around these stories,” Motum says.

And they are affecting ones.

“I talked to a woman from head office… she found out five minutes from the office on her way to work that she was losing her job—she heard it on [the radio],” Motum recounts. “Then the morning of, she asked the manager what she should do, and the manager just said ‘work on your resumé’. A week later, she didn’t have a job. And she was three months pregnant.”

Yet from his interviews so far (more are planned before the production launches) Motum says he is learning that the chain’s former employees still have “an undying love for the corporation that let them go,” despite its hurried departure.

“People have said that they bleed Target red, and even losing their jobs, they have no regrets,” he says. “I’ve spoken to a couple of cashiers who said they just really enjoyed the environment, that they felt it was a hip, sort of chic place to work, and that it was really ingrained in the culture that you’re a Target person, not a Wal-Mart person. There really was this love for the Target brand, a love for the Target culture.”

Even the pregnant woman from head office told Motum that Target was “the most challenging job she’s ever done and she sort of thrived on that … she called it a giant start-up.”

And so there is conflict—not just of big store versus little, or of consumer versus non-consumer, but a much more personal struggle we each suffer whether as retail employees or modern shoppers: what is our connection to these places where we spend so much of our time, and that play such a critical role in our lives? How are we expected to relate to these spaces, or deal with their passing? Do we mourn them? If so, should there be a wake?

The answer may lie in how we interpret the word community. “I think the takeaway is navigating a personal relationship with big-box stores, whatever that is. These workers weren’t a faceless corporation, they were people,” Motum says. “The interviews I’ve done reinforce that concept of a community space—they all mention that they love their colleagues [and] that many of them still get together for lunches. They call it the ‘Target family.’ ”