Shania may still be most famous for her midriff, but her musical legacy is everywhere today—from Taylor Swift to TV's 'Nashville' 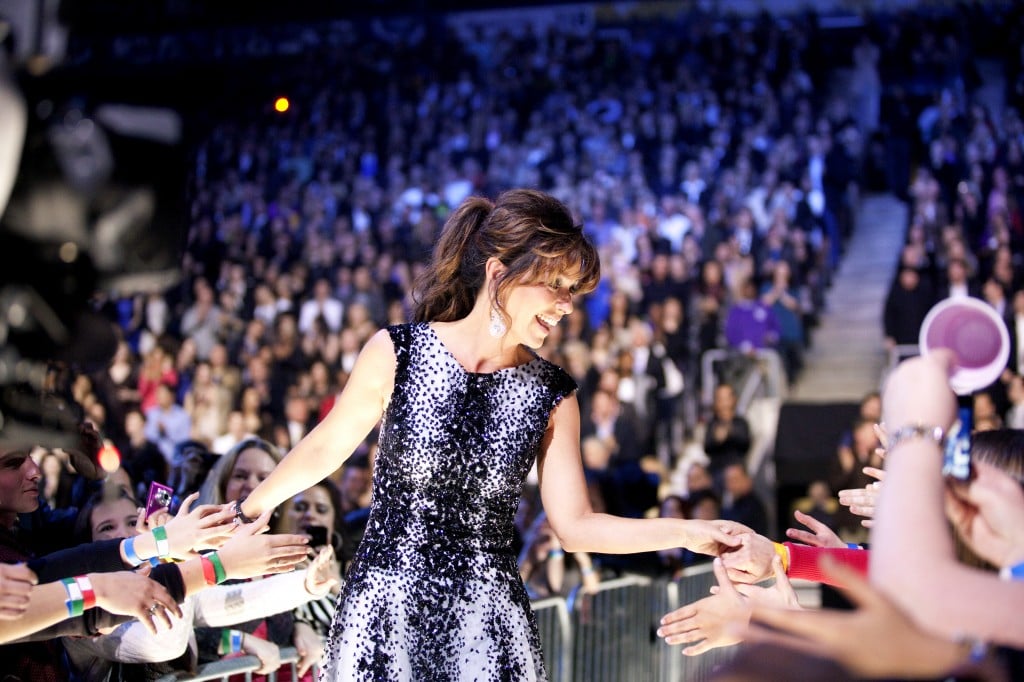 Shania Twain in 2011, inducted into the Canadian Music Hall of Fame. (Photograph by Jessica Darmanin)

Before Shania Twain could sing a single note, before she’d even dusted off her pink cowgirl boots, the people wanted more. The superstar’s summer farewell tour is now set to stretch straight through October, the result of sky-high ticket sales. We’re talking, after all, about the Queen of Country Pop. Her Rock This Country tour could consist of Twain declaring “You’re welcome, Taylor Swift,” and dropping the mic, and we’d all have to bow down.

But Twain’s iconic status and the 68-stop tour—kicking off in Seattle on June 5—would have stunned music critics 20 years ago. When she burst onto the scene with The Woman in Me in 1995, Twain wasn’t taken seriously.

Entertainment Weekly gave the record an F, calling it “one of the worst albums of the decade.” Billboard complained that the lyrics to Any Man of Mine were “dance-floor dumb.” Canadian critics were equally unmoved by the homegrown star. The Montreal Gazette said her album “feels manufactured” and the Toronto Star weighed in with, “Not much of a voice, but oh, those videos.”

It was accepted wisdom that “those videos”—code for sex appeal—were all Twain had to offer. The country-music establishment couldn’t stomach that Twain routinely bared her midriff. CMT went so far as to ban the video for What Made You Say That, from her self-titled 1993 album. Twain’s belly button was a lightning rod, and the blow-back could have derailed her career – if listeners hadn’t found the songs so catchy.

I was 10 when The Woman in Me came out, and can still remember hearing it for the first time. I was visiting my aunt’s farm, and she put it on at supper. When she asked if I liked it, I firmly shook my head no. It was a lie. I didn’t want to like country music—it was for old people—but these songs didn’t sound like Randy Travis or Alan Jackson or anything else my parents played in the car. There was enough pop and rock in here to make me wish Shania would keep on singing.

With its crossover appeal, The Woman in Me went on to sell more than 15 million copies, making it one of the most popular records in history. The masses convinced the critics, and Twain cleaned up at the awards shows the following year, winning Best Country Album at the Grammys and Album of the Year at the Billboard Music Awards. Twain’s 1997 follow-up, Come On Over, gave us four consecutive No. 1 hits and became the bestselling album by a woman in any genre of music.

Still, many sticklers accused Twain of ruining country music. In a sense, she did. The music on the radio today doesn’t sound much like Merle Haggard. But she ruined it in order to save it.

Related: Our Q&A with Shania Twain

In 1985, the New York Times declared that country music was dying: Record sales were cut in half, young people were turning to rock, and the genre’s aging stars weren’t effective on television. The article quoted country-music icon Tammy Wynette as saying, “If this trend continues, there won’t be any more country stars, because there won’t be any money in it.”

Fast-forward to 2015, and the very same newspaper is reporting that Nashville is a musical superpower, succeeding even as the recording industry struggles. Top 40 isn’t the most popular format on the radio anymore; that honour goes to country. Even the city of Nashville itself is sexy, thanks to the ABC prime-time soap of the same name.

It was Twain, alongside fellow ’90s hit-maker Garth Brooks, who showed Nashville how to appeal to the mainstream. Twain gave the genre a new face and a new twist, with songs such as Honey I’m Home, in which she—not her husband—comes home from a long day and wants a cold one, a foot rub and a snack. Suddenly, country was young, fun, and you could (line) dance to it.

Twain not only paved the way for country music to find a wider audience, but for artists themselves to take more liberties. Twain’s influence can be seen in the musical style and sass of the biggest women in the business today: Taylor Swift, Carrie Underwood and Miranda Lambert.

As Twain bids us goodbye, it’s clear that, after years of being criticized for dragging country music from its horse-and-gun roots, she was the genre’s real rebel.