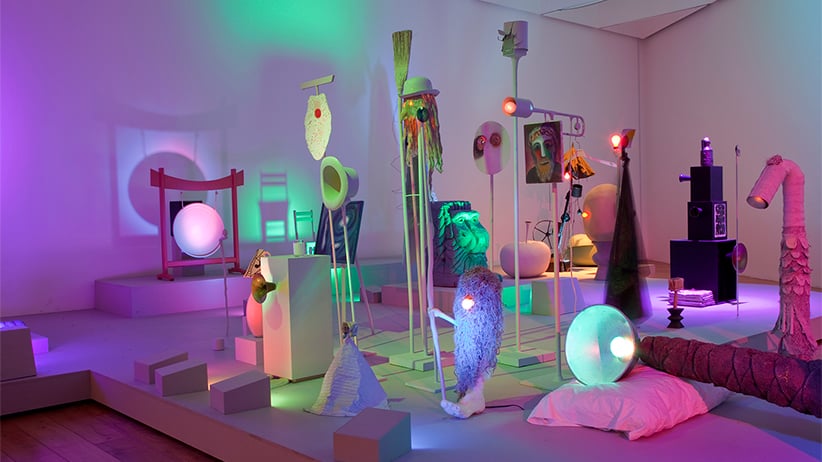 At their home in Vancouver, art collectors Kathleen and Laing Brown were waiting for the movers to arrive to collect a piece by Geoffrey Farmer. They were lending it to the Vancouver Art Gallery (VAG) for Farmer’s mid-career survey show, opening on Saturday, May 30. The piece, Notes For Strangers, is comprised of a curious grouping: a toy typewriter, an old bus transfer and some notes Farmer typed for fellow passengers as he rode the bus. The notes are wall-mounted in glass boxes, while the typewriter and the bus transfer sit on floating shelves.

When Farmer made this piece in 1990, he was still an art student and just beginning to figure out how to include text and theatre into his art practice. “It’s such a poetic piece. We keep it on the upstairs landing,” said Laing, ignoring a phone call on the other line from the Gagosian Gallery in New York. “We put it beside a work by Martin Creed, who won the Turner Prize. Martin’s piece is a neon sign that says ‘asshole’ in capital letters.”

Okay, so nobody can accuse the Browns of buying art to match the couch. And visitors to the VAG for Farmer’s survey show can expect equally challenging, often delightful, installations. Or are they assemblages? Or sculptures? No single label does the job. Sometimes Farmer is more of a collage artist, as when he used the back catalogue of Life magazine to make 27,000 cut-outs, all reconfigured to disrupt history and time. That encyclopedic piece, Leaves of Grass, was recently installed at its new home at the National Gallery of Canada. Two years earlier, it caused a sensation at Documenta, which is to contemporary art what the Cannes film festival is to cinema, held every five years in Kassel, Germany. The piece was so ambitious, it took three shifts of 30 assistants more than six weeks to get it ready in time for its debut.

“Collage is a widespread phenomenon, but Geoffrey takes it to a very high level of execution and imagination,” explains Daina Augaitis, chief curator and associate director at VAG, where Farmer and his studio assistants installed the 21-piece exhibition on the second floor (he ripped out that tired, grey carpet), in the gallery’s catacombs and in the gift shop.

The show, playfully called How Do I Fit This Ghost in My Mouth?, has a new theatrical installation created for the gallery’s rotunda.

Farmer describes it as a sculpture play. “It’s the story of the building’s architect, Sir Frances Rattenbury, who was murdered by his [second] wife’s lover with a carpenter’s mallet in the 1930s,” explained Farmer, 48, who remembers visiting the rotunda as a child when it was still a courthouse and his father was a Crown prosecutor. “Rattenbury’s wife was a singer from Kamloops, and we found a recording of her playing the piano, so that’s part of the audio, along with a backdrop from L.A. of a music shop. I added animated mechanical figures.” Farmer also incorporated his father’s black robe from court.

Curator Augaitis promises that the show will be wonderfully chaotic. That’s easy to believe, when you think of how skilfully Farmer mixes seemingly disparate content, such as Frank Zappa and Sesame Street’s Snuffleupagus. “Geoffrey, along with Brian Jungen and Myfanwy MacLeod, is part of a generational shift away from image-making toward process-based work that looks more toward L.A., incorporating pop culture,” said the director of Presentation House Gallery, Reid Shier, who curated Farmer’s first solo show in 1996 at the Or Gallery. “Vancouver’s older generation of photo-conceptualists, like Jeff Wall and Stan Douglas, blazed a very difficult trail for the next [era], by working from a town that’s geographically isolated, yet achieving international recognition.”

Farmer went further, citing their direct influence. “For a lot of those artists, photography had a sculptural quality,” he says. “If you think about Jeff’s light boxes and Stan’s screens, they have a presence in my work.”

This September, Farmer will be in a group exhibition of international artists in Paris. That answers the question, “How do you follow success at Documenta and a hometown survey show?” With the Louvre, of course.