With famous artists in tow, did the iconoclastic Byrne succeed in introducing colour guard to the urban masses at Toronto's Luminato Festival? 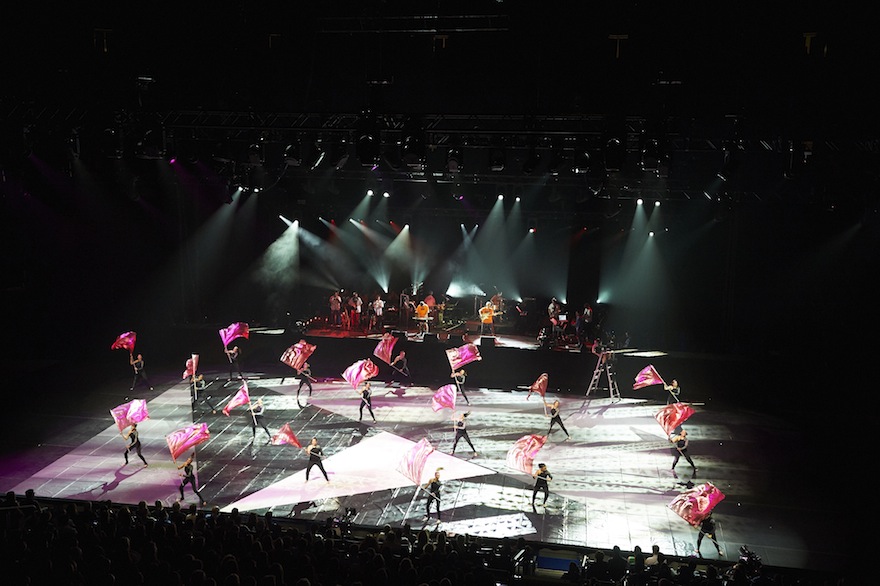 ‎David Byrne has only one biological child. And yet he has so many more children than that.

There were literally hundreds of them—from high schools in the eastern U.S., and two from Canada—on the floor of the Air Canada Centre on Monday night. The event was Contemporary Color, part of the Luminato Festival (the show runs again tonight, then again this weekend at the Barclays Center in New York City), curated by Byrne, which introduces colour guard, known as the “sport of the arts,” to the urban art crowd: It’s a combination of modern dance, cheerleading choreography and military precision, involving a lot of creative flag-waving (literally, with flags). Contemporary Color paired teams with live musicians; St. Vincent, Nelly Furtado, Tune-Yards and others wrote and performed original material tailored to each team’s routine.

The 63-year-old Byrne, the former frontman of Talking Heads, was by far the oldest performer there by almost 20 years (Furtado and the Beastie Boys’ Ad-Rock were the other veterans). As befitting his eternal curiosity, he entrusted newcomers such as Zola Jesus and Lucius and Devonté Hynes with this new project, not bankable names from his own generation. It’s the young and the curious who are still Byrne’s peer group—not artists frozen in time reliving past glories.

Byrne was taking a huge risk with Contemporary Color: How do you sell this small-town spectacle to an urban audience? (Answer: with hundreds of street posters and full-page ads in every newspaper for weeks leading up to it, apparently. It played to a full house.) Byrne is often accused of being a dabbler, the awkward intellectual intrigued by Third World cultures: Talking Heads were one of the first rock bands to explicitly reference contemporary African music, and Byrne has long been a champion of music from Brazil and Latin America. His one narrative film, 1986’s True Stories, was about small-town Texas eccentrics, and was criticized at the time as being condescending (not at all Byrne’s intention; he claims that critique says more about the critics’ insecurities than it does about him).

Colour guard is, as the evening’s interstitial videos proved, descended from rich traditions, from Egypt to Switzerland to the American Civil War, and the combination of athletics and artistry is on par with figure skating and ballet. Except that this more democratic medium doesn’t discriminate in favour of athletes: All body types are welcome, as long as you can move in time, toss a mock rifle in the air, and wave your (freak) flag high. Thankfully, it’s a lot less North Korean than one might think.

As a coming-out party for colour guard, the show undeniably succeeds. What needs a bit more work is the gateway drug that brought us all there: the live music. Each artist performed only one song with the house band, after which there was at least a five-minute gap between each act—which adds up, over the span of the two-hour performance. Many were excited to see St. Vincent, Furtado, Byrne, et al.: Surely they could have performed another song during the changeovers? The interstitial videos, while valuable for context this first time out, wore out their welcome. It was also odd to see attention magnets like St. Vincent, TuneYards and Ad Rock dial down their charisma to be part of the background. Why were they even there?

The one piece by composer Nico Muhly and radio icon Ira Glass was composed largely of edited audio clips from interviews with a colour-guard team; the house band was playing the score underneath, but it wasn’t clear if either Muhly or Glass was even in the building—and it didn’t matter, because the music and the colour guard were the focus, not whoever was standing on the stage.

Only a few of the 10 performers, namely Ad-Rock (with longtime Beastie Boy keyboardist Money Mark) and Merrill Garbus of Tune-Yards, wrote a new composition outside a pop-song structure, which suited the expressive choreography far better. Others merely wrote a new song—usually downtempo and somewhat morose—that might very well appear on their next album. Byrne, of all people, had one of the weakest songs: The melody was not only outside his natural range, but didn’t sound as though it would even make the cut on one of his own records.

So what of the real stars of the show? These were all the high school teams who do it for love, at the centre of a performance that clearly cost hundreds of thousands of dollars to create, market and execute. Surely it’s exciting to be paired with a prominent musician, to be showcased in a foreign country and in New York City, to further one’s chosen art in the public consciousness. In a week when one of the biggest corporations in the world was taken to task for failing to pay artists, let’s hope these kids got a piece of the pie.