The Interview: The industry of Dolly Parton

The legendary singer speaks on Miley Cyrus, feminism, and her secret to a successful 50-year marriage 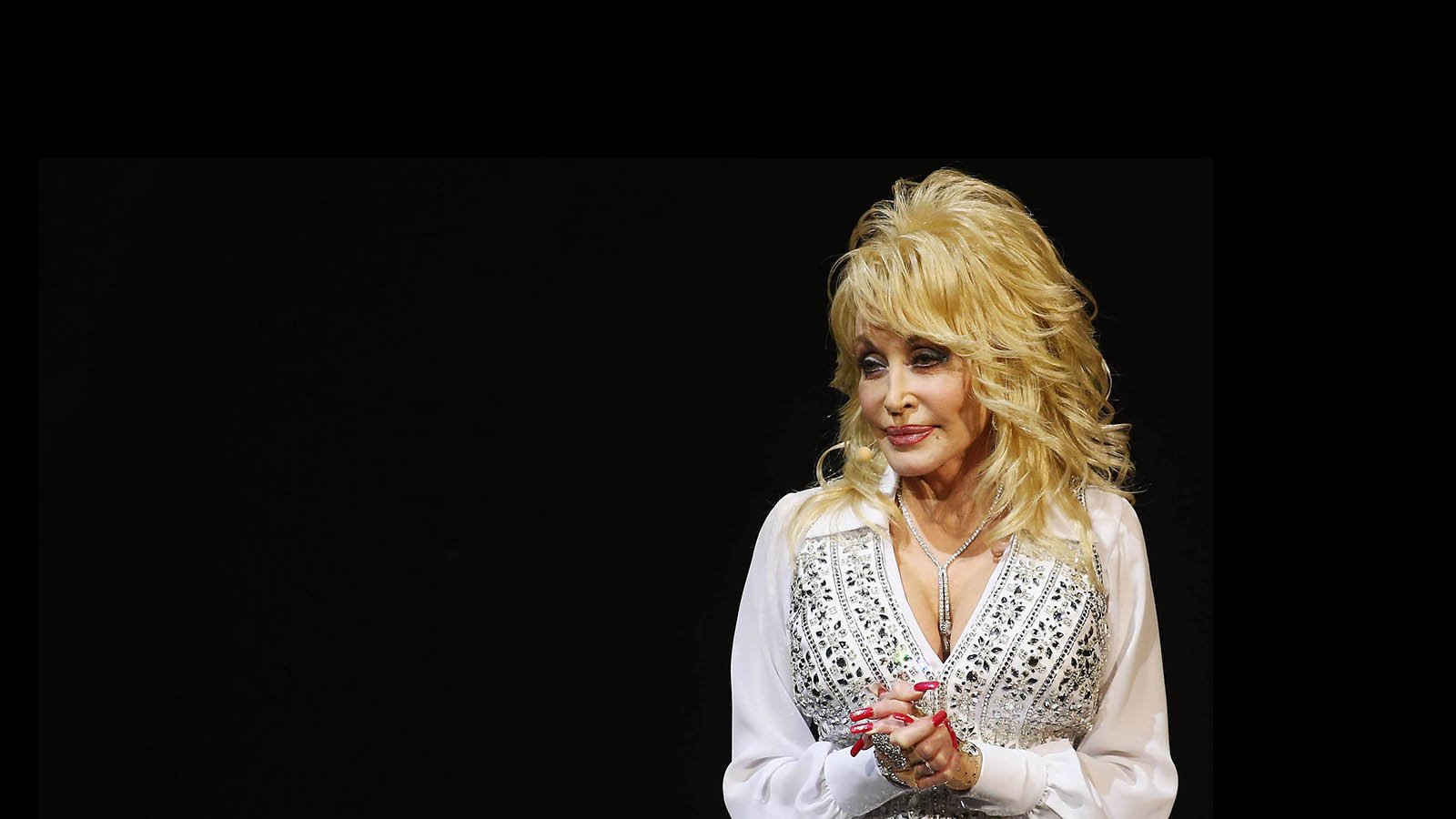 Andy Warhol once described Dolly Parton as “a walking monologue.” Over a career that spans more than five decades, the 68-year-old singer, actress and highly regarded songwriter (she’s written thousands, including megahits such as I Will Always Love You) has worked with everyone from Willie Nelson to Queen Latifah to Norah Jones. On her soon-to-be-launched album, Blue Smoke, her 42nd, the Grammy-winning, Oscar-, Tony- and Emmy-nominated performer brazenly rearranges hits by Bon Jovi and Bob Dylan alongside her own country tracks. They recall her time toughing it out as the fourth of 12 children raised with no electricity or running water in the foothills of the Appalachian Mountains in Tennessee.

Q: Fans claim your upbeat songs about cheaters and dead-in-the-water relationships are cheaper than therapy. The way you approach Bob Dylan’s Don’t Think Twice makes me think you and Dylan had a fling. Did you?

A: It does sound like I dated and dumped him! I’m gonna use that in my next stage show! No, me and Bob didn’t date, but I always say I’m going to do a whole album of Bob Dylan songs called Dolly Does Dylan.

Q: On Blue Smoke, you sing from the perspective of a child coming from a broken family in Miss You; a gospel singer in He’s Everything and a man who murders his wife in Banks of the Ohio. How do you get into character?

A: I sing as an actress, so it’s natural for me. Whatever I’m singing about, I just become the story. I always loved that old song Banks of the Ohio—it was always such a man’s song, so I’ve always wanted to record it. To change it up, I wrote a [spoken-word] front piece to it that presented myself as a journalist going into jail and doing an interview with this person who has committed this crime. Years ago, before they had newspapers, news was carried through song.

Q: The track sounds like a Flannery O’Connor short story. She had a way with making villains likeable in her fiction. Where did that curiosity to explore these sinister themes come from?

A: My childhood. We grew up with mama singing all these morbid old songs but they were beautiful. Oh, she’d cry and we’d cry. It would make your heart heavy, but it kind of instilled a type of emotion in my psyche.

Q: Websites like Jezebel have lengthy debates on whether or not you are a feminist icon. Is that a crown you’re proud to wear?

A: Yes, it is. I don’t think of myself as a feminist, but if they call me a feminist icon, that’s fine. I’ve always stood up for women and myself in general. I have a great love and respect, because I have had all these beautiful sisters, aunts and my grandmas, but I love men. I totally understand the nature of men.

Q: You were on the Today Show a couple of weeks ago and you were talking about a 9 to 5 reunion. Is this still going to happen?

A: On Netflix, Jane [Fonda] and Lily [Tomlin] have a new show together, and I’m going to probably visit that now and then, but I don’t know that we’re ever going to get to do a reunion of 9 to 5. If we do, we’re going to have to call it “95.”

Q: Why do you think that film still gets written about today?

A: There are certainly a lot of things that still need to change, when it comes to women in the workforce. That little movie definitely had its message and it really started a lot of balls rolling, where women were concerned. People enjoyed the three personalities stringin’ up their boss because everybody wants to kill their boss—male or female. It definitely touched a nerve. I admire Jane Fonda for coming up with that whole idea.

Q: Songs like Just Because I’m a Woman and Dumb Blonde also talk about some serious double standards women face. At the time you released those songs, a lot of people didn’t want to hear what you had to say.

A: There were people who wouldn’t play my stuff on the radio! Just Because I’m a Woman stayed on, like, number 1 for seven years in South Africa, but there were times in the States when people thought it was a little too much. I wasn’t even thinking in terms of being a feminist; I was just writing my feelings. That song was written by me because of a situation with my husband. He’d never asked me if I’d ever been with anybody else in bed. After we married, he did. I didn’t feel like I should be lying to my new husband, so I told him the truth and it just crushed him. I thought, “Well, look, my mistakes are no worse than yours.” I did get some bad letters.

Q: How did you respond to that negativity?

A: My attitude was, “Well, to hell with you!” I write what I write, say what I say, ’cause I feel what I feel, and if I did it different, it would make me a liar! So I’d rather be an honest person than a good liar.

Q: In two years, you’ll celebrate your 50th anniversary with your husband. How do you make it work with so much touring? Skype?

A: We don’t do Skype. He’s glad to get me gone when I’m gone. I’m glad to be gone when I’m gone, because we’re both very independent. He’s such a homebody, and I’m a total gypsy. That’s one of the things that’s worked out well. We call each other. We talk for a long, long time on Sundays. One of the reasons I think I’ve done so well is because I’ve had the freedom to work. I never had children and I never had a husband who’s wanted to bitch about everything I did.

Q: What plans do you have for your anniversary?

A: We may have a big old wedding again out at our home place in Brentwood.

Q: I had to cross the border to interview your goddaughter, Miley Cyrus, a few months back, and a U.S. customs officer found out that’s who I was interviewing and almost didn’t let me into the U.S. Why do you think so many people are afraid of her brand of sexuality?

A: The reason she had to be so drastic is to try to get out of that Hannah Montana [phase]. She’s very proud of that role, but it’s Shirley Temple for the older folks. Nobody wanted her to grow up, either. I think people just think of Miley as their little daughter or granddaughter, so they take it personally. I tell you, I understood why she had to go to such extremes to really make her point. She’s so talented. She’s so smart.

Q: Could you relate to Miley?

A: Yes, I could. First of all, I wouldn’t have had the legs and the beauty to have pulled that off. Miley knows what she’s doing; I hope she does. If she plays her cards right, she can have a long and good career. She did it like a shock jock. She had to go that way.

Q: Isabella Rossellini recently said she feels more beautiful as an older woman than she ever did as a model. Do you think you’ve grown into a version of yourself you’re happy with?

A: Well, I never have thought I was beautiful and I never can get beautiful enough. I’m always doing whatever I can to look as good as I can, nipping and tucking if necessary. When you’re older, you probably look more bizarre to people. But I don’t care. I’m just totally convinced that it’s more important that I be happy with me.

Q: I was reading Andy Warhol’s diaries and he mentioned you guys hung out quite a bit in New York. What kind of impact did that time have? Did you feel like an outsider looking in?

A: You want to know what I really think? When I was with Andy Warhol, I thought, “God, his wig looks cheaper than mine!” I never felt like a fish out of water. I always felt like I belonged where I was. It was quite amazing when we used to all go to Studio 54. I couldn’t believe what I was seeing, but I enjoyed it. I loved the music, but it was just fascinating to me to meet all these famous people, the Calvin Kleins and Diane von Fürstenbergs and the Barry Dillers of the world.

Q: You read a lot while you’re on the road.

A: I read all the time, at least 50 or 52 books a year. I read a book just recently by a new writer, Peace Like a River [by Leif Enger]—I really enjoyed that. Now I’m reading The Signature of All Things [by Elizabeth Gilbert].

Q: When it comes to how you view your work—the musicals, the theme park, the clothing line, the perfumes, etc.—do you consider yourself more of an industry than an artist?

A: I do think that. I’ve got to be responsible for everything. That’s why I still have to work so hard. I wanted all these things and now I’ve got them. I guess you could say I dreamed myself into a corner. I’m going to come out fighting. I got new dreams to dream. I don’t have anything else to do. I don’t have children. My husband doesn’t care if I’m home or not!

Q: With so many fingers in so many pies, do you ever feel your work is compromised?

A: When I think somebody’s acting more like a pimp than a manager, and I’m more of a prostitute than an artist, I always tell them where to put it. People will use you as long as you let them. So I just say, “Hey, enough’s enough,” and things get cleared up.

Q: Who would you love to play you? Taylor Swift?

A: Oh, she’s too tall for me, Lord have mercy. Maybe Reese Witherspoon! She’s little. We’ll just have to get her a big old boob job. No, Taylor’s way too classy! Hopefully, it will be done in a year and a half. After that, I am going to [release] a dance album.

FILED UNDER: Dolly Parton The Interview