The missing painters of abstract expressionism 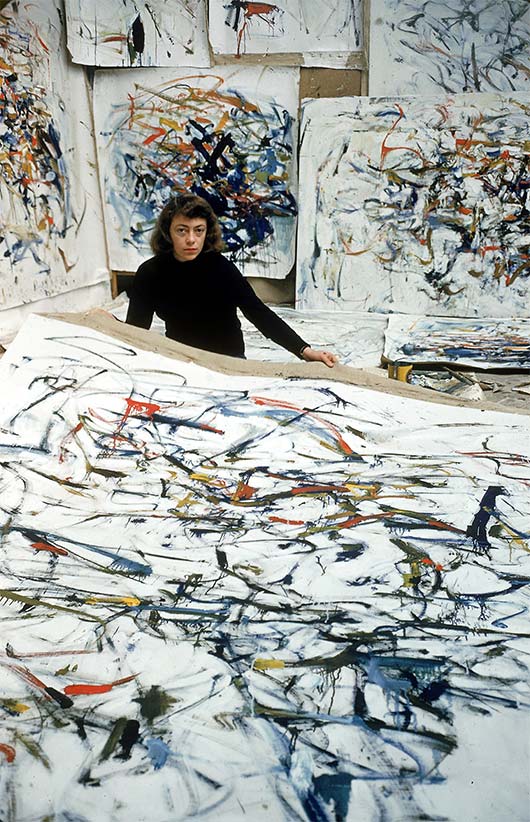 Walking through the exuberant beauty and masterful talent on display at the Women of Abstract Expressionism show currently at the Denver Art Museum, it’s easy to forget this is a historic art moment. The collection of more than 50 canvases represents a landmark—the first major show of female artists working within a genre famous for its testosterone- and booze-fuelled machismo. We know the men—Jackson Pollock, Mark Rothko, Willem de Kooning, Hans Hofmann, Robert Motherwell. And certainly some of the 12 artists on display here are celebrated as well, though too often in terms of their adjacency to more famous partners—Lee Krasner, married to Pollock; Elaine de Kooning, wife of Willem; Helen Frankenthaler, wife of Motherwell; Joan Mitchell, the long-time partner of Jean-Paul Riopelle. But there’s also the joy of discovering equally wondrous work by lesser-known artists, among them Ethel Schwabacher, Perle Fine and Sonia Gechtoff.

That it took until 2016 to mount such an exhibit is telling of art-world biases toward gender and geography, but mostly of old-fashioned sexism. Given the depth and range of painterly expression and the mastery on display, there’s only one reason these paintings don’t fetch the millions at auction the AbEx big boys summon—and it’s not too difficult to figure out what that is.

Gwen Chanzit, the museum’s curator of modern and contemporary art, didn’t set out to produce an all-women show: “I wanted to broaden the parameters of what we know about abstract expressionism—and destroy some myths,” she tells Maclean’s. It was a quest that began in 2008, when she toured Action/Abstraction at New York’s Jewish Museum; the show offered a rethink of abstract expressionism, a term first used in 1946 to describe the first American-grown art movement, one devoted to emotional intensity and an anti-figurative aesthetic. “There were men of colour and women whose names I didn’t know,” Chanzit says. “It was a real lightbulb moment.” When she began researching, she was shocked to learn no major museum had mounted an all-female abstract expressionist show.

That the women had been marginalized wasn’t a surprise. “That’s true of all almost all movements in art history,” Chanzit says, noting that H.W. Janson’s History of Art, the art-world bible, didn’t include any women when it was published in 1962, a situation that wasn’t rectified until a 1986 revision.

Still, such exclusion was particularly pointed within “a movement that has been all about the heroic, paint-splattered male artist,” says Chanzit. Yet the women were full participants, not followers. Many studied with Hofmann in New York and in California with Hassel Smith and Clyfford Still. They too worked in big, muscular formats and took inspiration from Freudian psychoanalysis and Greek myth. Many also participated in the landmark 9th Street show and at the Sable Gallery Annual. “I don’t think they saw themselves as a separate group and I hope we won’t see them as a separate group,” says Chanzit. Sexism was simply the norm. Chanzit repeats a so-called compliment Hofmann once gave Krasner: “This is so good you wouldn’t know it was done by a woman.” 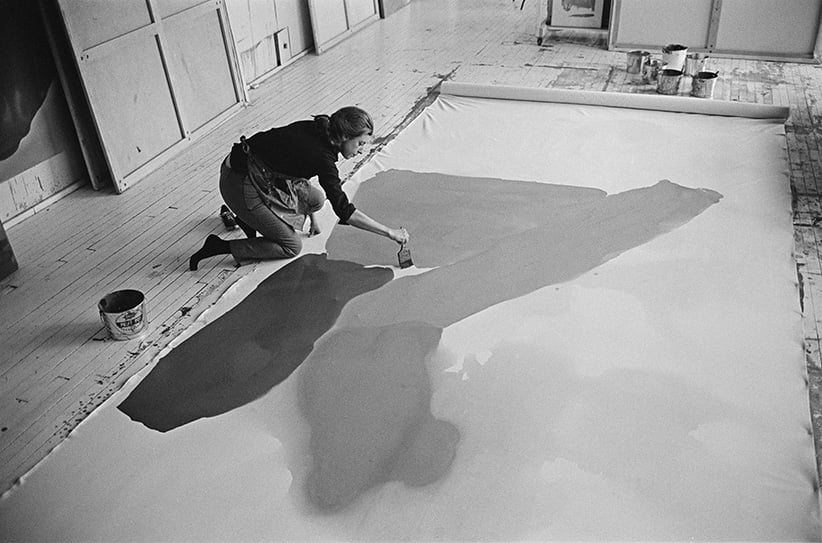 A 15-minute video accompanying the show features Helen Harrison, director of the Pollock-Krasner House in the Hamptons, standing in the studio where the couple worked: “This is known as the Pollock Studio, but Lee Krasner worked there three times as many years,” she says. Some women showed under aliases: Grace Hartigan, the only woman featured in a 1956 Museum of Modern Art show, exhibited for a time as “George” Hartigan. Chanzit also wanted to look beyond the New York School synonymous with the movement and include the San Francisco “Bay Area” painters, among them Jay DeFeo, Deborah Remington and Gechtoff, who showed at the Guggenheim in 1954. Gechtoff observed a far more pronounced gender divide in the New York art scene than in the Bay Area, where women were able to show as easily as men.

Chanzit’s seven-year quest included putting out feelers to curators, galleries, storerooms and artists’ estates for works dating between the mid-1940s and -1960s. She narrowed a list of more than 100 artists to 12. (The show’s catalogue, a gorgeous object published by Yale University Press, includes more than 40.) Discovering Mary Abbott’s colour-saturated work was a “revelation,” she says. She hesitates to draw gender lines when talking about the work, other than to note that the women were more likely to title their paintings. They also boldly took on subversive topics: Hartigan’s work, for instance, explored themes of sexual identity and critiqued bridal imagery and consumerism decades before it became fashionable to do so.

Related: Why art galleries are quietly clearing out their vaults

Abstract expressionism, by its nature, is an individual response to something specific—an experience, a person, a memory, a literary work, the season, the time of day: “You can paint a cubist painting by formula and it might not be a very good cubist painting, but you cannot paint an abstract expressionist by formula.” Keeping the show small was vital, she says, to present the artists as individuals with unique voices. Each is given her own space in the museum’s Daniel Libeskind-designed extension, surrounded by her other works “in concert with one another,” Chanzit says. 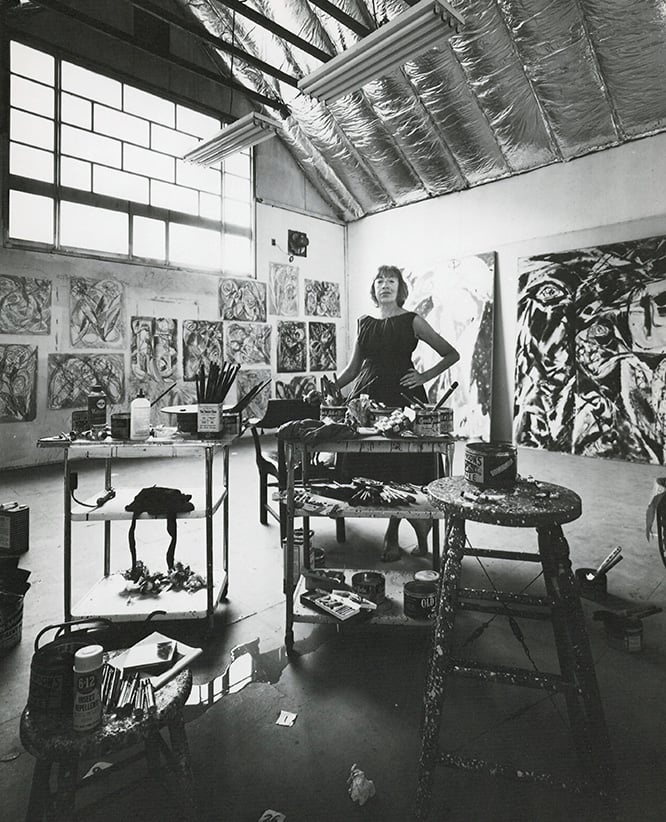 There’s clearly a ready audience. The exhibit, which will run until Sept. 25 before touring, had unprecedented sponsorship, the museum’s director Christoph Heinrich said in introductory remarks before a preview: “It’s the longest supporter list I’ve ever had to read.” That isn’t surprising. Reclamation and re-evaluation of female artists has been ongoing for decades. Washington’s National Museum of Women in the Arts, the source of a few of these canvases, opened its doors in 1987; it remains the only major museum in the world solely dedicated to recognizing women’s creative contributions. All-women shows have become fashionable. In 2010, the Brooklyn Museum mounted Seductive Subversion, highlighting overlooked female pop artists working between 1958 and 1968; in 2012, the L.A. County Museum of Art staged In Wonderland, showcasing female surrealist painters in Mexico and the U.S.

Chanzit hopes the show will help to integrate women into the history of abstract expressionism, rather than kickstarting a flurry of similar shows: “The takeaway for me is to let our audiences know that there are more important works out there,” she says. “It’s not that we need to keep doing this over and over. I hope we’ll widen the parameters so that it’s not necessary.”

The market seems to be listening. A 2013 DeFeo retrospective at the Whitney saw demand for—and prices of—her work spike. One lasting legacy of this exhibit, Chanzit says, is the Denver Art Museum’s commitment to invest in female AbEx artists; it has made seven acquisitions for the permanent collection. A Gechtoff was purchased off of the wall of the artist’s home.

Three of the artists in the Denver show are still alive. One, Judith Godwin, now 86, is here today, marvelling at the accomplishment: “It’s magnificent.” Godwin’s work is beautiful and darkly lyrical; several paintings here were inspired by her friend, the dancer and choreographer Martha Graham.

A spirit of defiance underlies the show; a Krasner quote greets visitors: “I’m always going to be Mrs. Jackson Pollock—that’s a matter of fact—[but] I painted before Pollock, during Pollock, after Pollock.” There’s also the ballsy 1950 Hartigan canvas The King is Dead, a reference to Picasso. Some works are well-known within the genre: Frankenthaler’s Jacob’s Ladder from the MoMA, Elaine de Kooning’s riotously beautiful Bullfight and Krasner’s The Seasons, a lush fusion of botanical and female forms, on loan from the Whitney. It takes on a new resonance situated next to six other Krasner canvases. 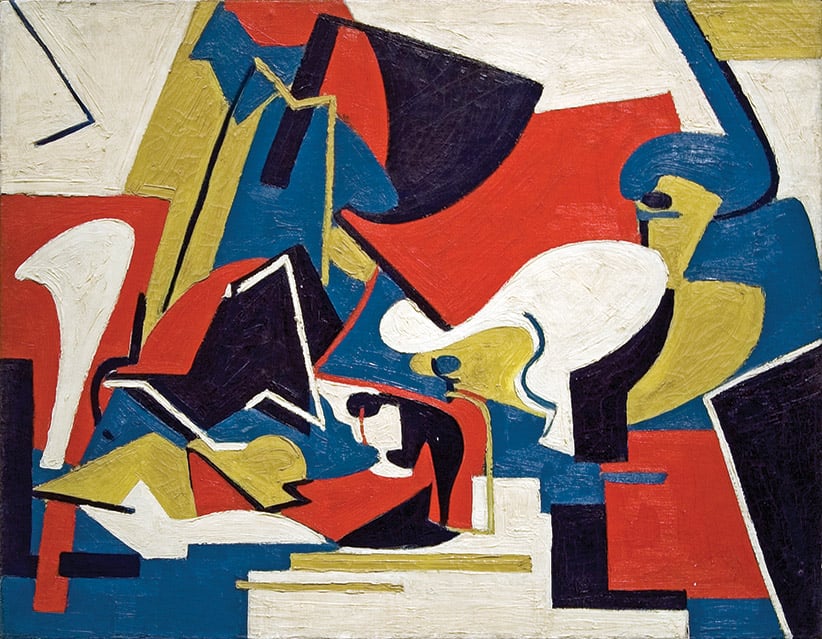 “Painting is a means of feeling,” Mitchell once said. The emotive punch of this show is proof of that. Seven Mitchell canvases are here—studies of atmosphere and light that rival Monet. A counterpoint is DeFeo’s darker, textured, almost geological work. Incision, a massive canvas, features oil layered like lava and string. Then there’s Schwabacher’s Antigone I, a work that radiates with mythic rage. For anyone looking at the canvas, her daughter’s words in the video echo loudly. “My mother hated when people called her a ‘woman painter,’ ” she said. “She wanted to be a painter, period.” With this groundbreaking show, she is. Such expression by its nature is neither male nor female but ultimately human. Also human, of course, is the value we choose to assign it.