The person with the most pressure-packed job in Canadian art

Alexandra Suda wants to bring the crowds to a livelier National Gallery of Canada. Think ‘Voice of Fire’. 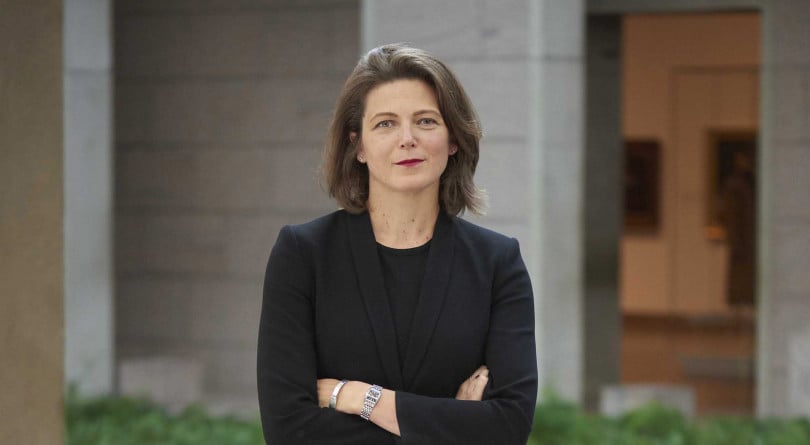 It doesn’t take an expert eye to see that the National Gallery of Canada is under new management. Just inside the main entrance of the glass-and-granite Ottawa fine art institution, where regulars were used to lining up at the ticket desk, visitors this winter instead come upon a two-story structure of wooden beams and tanned hides. The installation is by Norwegian artist Joar Nango, but the message sent by placing it in such an unignorable spot comes straight from Alexandra Suda, who took over as the gallery’s director last spring.

Suda made pushing splashy art out into the gallery’s public spaces for Àbadakone: Continuous Fire, a sprawling exhibition of Indigenous art from around the world, her first highly visible innovation as director. In an interview, she notes that just outside the gallery’s public entrance stands Maman, the huge—and hugely popular—bronze spider sculpture by the late Louise Bourgeois. “You know, two million-plus people see Maman every year,” Suda says. “How do we get more people to come beyond that threshold?” 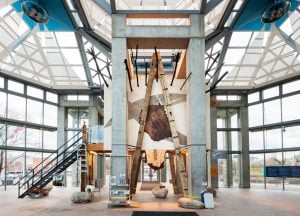 Sámi Architectural Library, installed at the National Gallery of Canada, 2019. Collection of the artist, ©Joar Nango. (Photo courtesy of the NGC)

A glance at her resumé doesn’t reveal any obvious indication that she would bring to her new job so much enthusiasm for luring in crowds. When she was appointed last spring, much of the attention focused on the fact that Sasha—as everybody in the art world knows her—was just 38 and had never run anything before. Her last job was as curator of European art at the Art Gallery of Ontario, and she’s a specialist in medieval art. (By contrast, her predecessor, Marc Mayer, was 53 when he took over the gallery in 2009, and had previously been director of Montréal’s Musée d’art contemporain.)

But those who have worked most closely with Suda were not surprised she landed what is arguably the most prominent, and pressure-packed, role in Canadian art. She was already working at the AGO when Stephan Jost took over as director of the Toronto gallery in 2016. Jost knew she had elite credentials as a medievalist, but she didn’t strike him as destined for a career curating shows of centuries-old art. “The first time you meet somebody, you often get a strong impression,” Jost says. “And my impression was that she was a museum director, not a curator.”

That might be because Suda brings an unusual mix of qualities to her work—blending the required academic nerdiness with a less expected athlete’s competitiveness, and a North American plainspokenness with a European-tinged sensibility. She was born in Orillia, Ont., but grew up in Toronto. Her parents and grandparents had come to Canada from Czechoslovakia in 1968, after the Prague Spring burst of political liberalization was suppressed by the Soviet Union.

Her father’s brother had worked for Radio Free Europe’s Czech-language service, she explains, putting the family under the sort of scrutiny that forced them to flee. Settling in Canada, the family spoke Czech at home, but home-country politics wasn’t a big part of their life. Still, it mattered. For instance, when Suda gave her parents a book of photographs by Josef Koudelka, a famous photographer of the Prague Spring, her mother found herself in an image showing the tanks rolling in.

Suda’s mother taught in a special-needs elementary school, while her father, who had managed ski hills, taught courses in ski-area management at Toronto’s Humber College. They took Sasha to Toronto’s AGO and the Royal Ontario Museum, but visits to New York, where an aunt lived, made a bigger impression—what Suda calls “the whole narrative” around the Metropolitan Museum, the Guggenheim and the Museum of Modern Art.

In 1990, the family spent eight weeks in Europe. Even as a little girl, the way art permeated Paris and Prague hit Suda: “It’s indoors. It’s outdoors. It’s a way of life.” She also brought back perhaps the most Czech anecdote imaginable. The Sudas had a dog, a Standard Schnauzer, that they’d acquired from what was then still Czechoslovakia. And they knew that Vaclav Havel, the famous former dissent who was then the country’s president, owned the dog’s sister. So 10-year-old Sasha found the presidential castle, knocked on the door, and asked to meet the president’s pet. Her request was granted. She remembers Havel looking down at her from a balcony and waving.

Back in Toronto, Suda wasn’t a budding artist, but she was a competitive skier and basketball player. A rowing coach took a look at her long limbs and signed her up. She ended up applying for rowing scholarships to many U.S. universities, and chose Princeton, where she would captain the women’s open-weight crew. The image of her college years is purest Ivey League. “Rowing on a three-mile-long lake that was built by the Carnegie family for that very purpose, and then biking up campus with your books under your armpit—yeah, it’s pretty cliche,” she says with a laugh.

As a student, she immersed herself in art history. First drawn to modernist courses, she studied the American art of the 1960s, including minimalism and New York’s Abstract Expressionist movement. It was a leading professor of modern art who nudged her toward deepening her perspective by looking further back in the history of painting. That lead her to produce an undergraduate thesis on the Italian Renaissance, and then delve even further back in art history as she completed a PhD at New York University’s Institute of Fine Arts, where her dissertation dealt with illuminated medieval manuscripts.

But the more formative part of her New York experience was landing a job working at the Metropolitan Museum of Art under Barbara Drake Boehm, a top medieval art curator. Boehm was pulling together a show called Prague: The Crown of Bohemia, and needed a Czech-speaking assistant on the project. Suda’s tasks included waiting for crated masterpieces from Europe to arrive at all hours. She fondly remembers sleeping in the backseat of a car parked by the Met’s loading dock. “I just got an amazing kind of privileged access to the behind-the-scenes of a museum and what makes it tick,” she says.

Boehm says the “energy and leadership qualities” Suda carried into the art world from college sports set her apart. “You know, she could really get people to row together, shall we say,” she says with a laugh. As well, there was what Boehm calls “a specifically European thing”—something related to Suda’s awareness of where art fits in the Czech Republic’s fraught history. “It’s not only about talking about or presenting pretty things,” Boehm says.

And yet deploying pretty things, or at least eye-catching art, to pull in crowds is part of the job. Boehm says the challenge is greater when it comes to art that doesn’t have the familiar star-quality of, say, 19th-century French Impressionism. In the Prague show, for instance, she positioned what she describes as “this great, gilded, slightly gaudy tabernacle” from a Czech cathedral right at the exhibition’s entrance, aiming to draw in visitors who might have been tempted to walk past to other parts of the Met’s massive floorspace. They also exploited Prague’s status as a destination for contemporary youth travellers.

Suda moved back to Toronto work at the AGO just as it was entering a new era following an ambitious renovation and expansion designed by architect Frank Gehry. “The AGO was on the cutting edge of engaging with audience,” she says. For Suda, that meant finding ways to pull gallery-goers into Small Wonders, an exhibition of intricately carved wooden rosaries, prayer beads and altarpieces from the 1500s. Among the innovations in that show: a virtual reality display where visitors put on goggles and headphones to go inside a tiny prayer bead depicting heaven and hell in 3D. It was more than a gimmick. Suda talks of being moved by seeing groups of nuns and teenagers becoming fascinated by the VR experience. 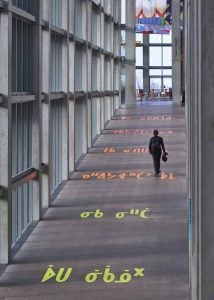 ᐆᑌᓃᑳᓅᕁ (ōtē nīkānōhk), 2018, installed at the National Gallery of Canada, 2019. Collection of the artist,Joi T. Arcand. (Photo courtesy of the NGC)

Jost says Suda’s success at the AGO in taking the undeniably esoteric subject matter of Small Wonders and giving it popular appeal is a telling sign of what should be expected of her at the National Gallery of Canada. He describes her as having “a growth mindset.” Like Boehm, he mentions her competitive sports background when he describes her drive to succeed. “We all make mistakes,” he adds. “But I’m pretty damn sure she’s not going to make the same mistake multiple times.”

Measuring success at a federal cultural institution can be tricky. Early impressions of Suda are upbeat. The opening night bash for the Àbadakone Indigenous art show was an unusually packed, boisterous affair. In interviews, she praises the gallery’s “incredibly dedicated staff,” and credits them with jumping enthusiastically on her suggestion for pushing art out from the gallery’s exhibitions spaces into its meeting and walking areas.

But making the gallery feel livelier will only count, over time, if the public responds. Suda says annual visits were already up significantly under Mayer’s leadership to around 400,000 now from closer to 300,000 a few years ago. “You know,” she says, “500,000 would be great in the shorter term.” She points out that, just across the Ottawa River in Gatineau Que., the Canadian Museum of History draws more than a million a year.

But Suda also insists there’s no need to dumb down the programming, or rely only on blockbuster shows of household-name artists, to broaden the gallery’s appeal. “I think we need to really park our expectations of what the audience wants and have confidence in the fact that they’re interested in what we have to say and what our collection has to say,” she says.

In fact, she casts back for inspiration to the moment in history when the gallery was its most controversial—after the 1989 purchase of Barnett Newman’s blue-and-red striped Voice of Fire for what detractors quickly deemed an outrageous $1.8 million. Suda’s tone turns envious when she speaks about the ensuing uproar.  “The National Gallery played its leading role around what art is when the Voice of Fire controversy was the talk of the nation,” she says. “And I think it’s that space that we’re sort of comfortable in.”