The street artist Banksy is defined by simple subversions and a secret identity—and an unauthorized exhibit of his work, in its contradictions, becomes the truly artful work 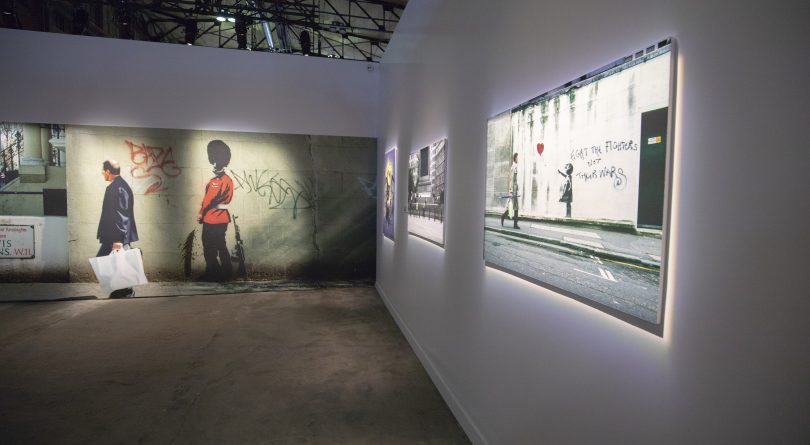 Steve Lazarides knows Banksy. In 1997, the then-20-something Brit was commissioned by a magazine to photograph the enigmatic street artist (or, rather, the back of the artist’s head, thanks to Banksy’s hidden-identity mythos). For the next 12 years, Lazarides became part of the collective around the artist as an agent, manager, documenter, and “hand-in-glove” collaborator, galloping around the U.K. and beyond with their chaotic ethos, bankrolled by his efforts, as “the straightest one in the group,” to sell prints to collectors. He knows the secretive Banksy so well, in fact, that when a Maclean’s reporter shares a tip that a Toronto construction project has, just days before the opening of Lazarides’s touring exhibit The Art of Banksy, uncovered a piece of stencilled graffiti bearing enough of Banksy’s stylistic qualities to cause the crew to debate having it assessed for authenticity, it takes him seconds to dismiss it.

“My first instinct is that’s definitely not him,” says the 49-year-old, irrepressibly British and outfitted in a seemingly painted-over suit that matches his status today as a high-profile, mainstream gallerist of street art, which itself has grown mainstream. He takes another look at a photo of the piece. “It’s hard to explain, but when you work with someone that long, you kind of know stylistically how they work…but I am 99.9 per cent sure that’s not him.”

He also knows Banksy well enough to know that the artist would not like the project he is undertaking in Toronto. Tucked away in a rapidly gentrifying northwest nook of the city, The Art of Banksy—an exhibit featuring more than 80 original prints, photos, sculptures and murals that has toured places like Germany, Israel, and Auckland, to madding crowds—seems to oppose everything the countercultural, anti-capitalist and elusive graffiti artist stands for. Tickets, which are already 80 per cent sold out, cost $35 through multinational promoter Live Nation and fee-happy Ticketmaster. The exhibit’s own website leads with the boast that it will feature “over $35 million in art.” The artist who has decried galleries as “the trophy cabinet of a few millionaires” will be showcased through loaned pieces from private collections. There are even VIP passes and—in what feels like an extended middle-finger to the artist whose 2010 documentary Exit Through The Gift Shop in part skewers the commodification of street art conscripted to monied buyers at auction houses—there is a store at the end of the winding exhibit from which you can buy tchotchkes.

“He’d never be [happy with it] because he’s not in control of it,” he says. 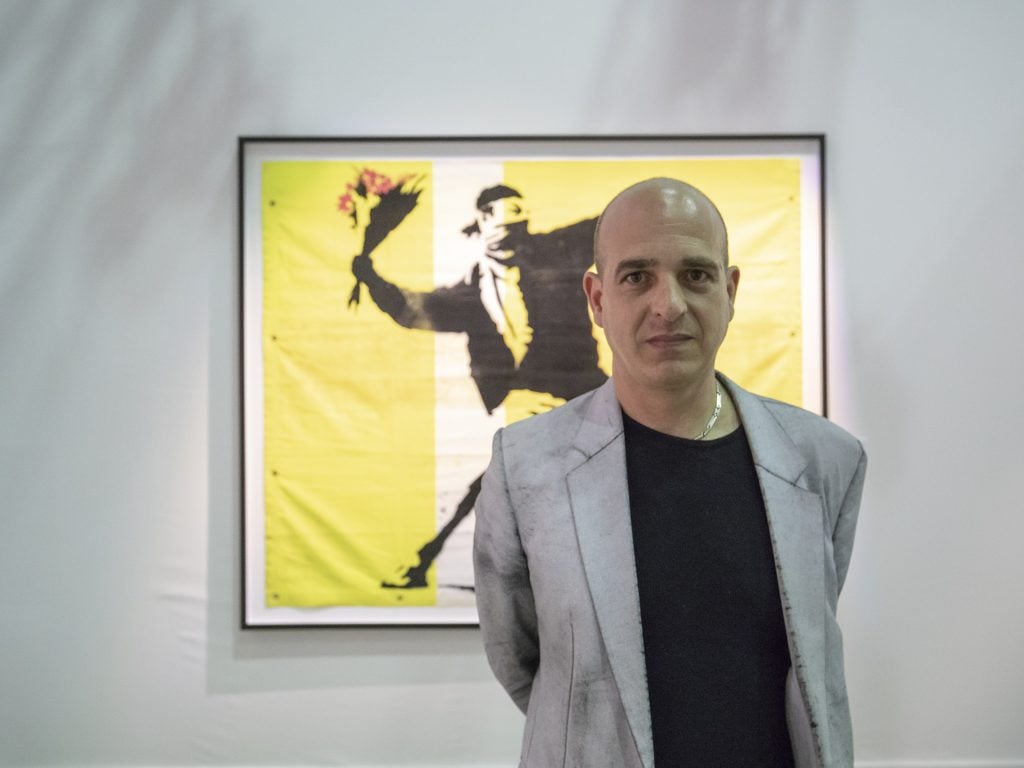 Steve Lazarides is photographed in the ‘Art of Banksy’ exhibit in Toronto on June 11, 2018. (Photograph by David Zelikovitz)

But Lazarides, who had a falling out with Banksy about a decade ago and hasn’t spoken to him in years—Banksy’s website denounces him and the exhibit on his own website, stating that he “is NOT on Facebook, Twitter or represented by Steve Lazarides or any other commercial gallery”—seems unfazed by the big question on people’s minds. That is: How can the vision of an anti-capitalist, left-wing activist graffiti artist like Banksy be packaged, commodified and sold for $35 a pop in a place as staid and sterile as an art gallery?

Questions around that seemingly core contradiction have dogged the exhibit everywhere it’s gone. In Melbourne, a local artist was asked to contribute a piece, and he produced a send-up of Caravaggio’s The Taking of Christ that depicted Lazarides as Judas. (He displayed the piece anyway, telling SBS News, “”I’ve been called far worse over the years so I’ll take Judas.”)

READ MORE: This scientist may have helped uncover Banksy—and a new way to fight terror

For Lazarides, it’s about getting the artwork—so often tethered to the out-of-town walls and buildings they’re sprayed onto, or held in the coffers of their rich owners—seen by people who would never otherwise have a chance. (Indeed, he says, one of the exhibit’s showstoppers, “Flags”—a showcase piece from his seminal Barely Legal exhibit in Los Angeles—had been mothballed since the 2006 show.) “I think the general public made [Banksy], and I think they have the right to see his work. Museums aren’t going to put this kind of show on, so we will,” he says, defending the decision to put on the show. He goes on: “People have a go at these guys for doing exhibitions in galleries, but they have to make money or they can’t make the stuff on the street. If they can’t make money, then the only people who could do it is the rich. And the best ones do different things in galleries than they do on the street. They deserve to be in galleries and museums.”

It’s a complicated, if still vexing, argument. If the original spirit of street art was to truly deliver art to the people, then bringing it to more people through touring exhibits seem almost part of that mission—and as much as capitalism is the target of Banksy’s skewering, that kind of democratizing costs money.

But as one chews through that contradiction as they wander through the warehouse, and think about the classical tension between Lazarides’s practical for-profit mentality against the backdrop of white gallery walls where framed anti-authority prints hang, painted by an artist who isn’t there, it becomes clear that that’s the exhibit’s real art.

In 2018, Banksy’s art—once radical and vital and fresh—now seems almost cartoonishly insufficient. Famous pieces like a bandana-masked protester hurling a bouquet of flowers instead of a Molotov cocktail, or nuns wailing in front of a “sale ends today” poster, feel like one-note, superficial critiques today. And while Lazarides continues to laud Banksy as a genius of political art and a lancer of societal boils, he himself demurs a bit: “He always had a very simplistic message, so he’d boil something down that was very complicated into one print. So I can see where the accusations come from, but at least he’s trying to say something…at least he’s having a go.”

So at The Art of Banksy, the contradictions of the exhibit itself—rather than the prints—become the most interesting art in the building. A silent, secretive artist who would rather you not think about him as a person—but in his opinionated, activist art, is actually begging you to do so, leaving the art itself rather wanting—is being displayed in an exhibit that wants you, very much, to think about him and his relationship to this kind of thing. The exhibit isn’t so much a jarring negation of Banksy’s work as it is an interesting, toothsome contradiction; it feels in the spirit of Banksy’s own work.

This is art itself operating as the gears of a broader performance art piece, like a live-action gallery experience of the very message of Exit Through The Gift Shop, in its interrogations of street art and the art world. The exhibit is fascinating as a piece—more so than the individual works. 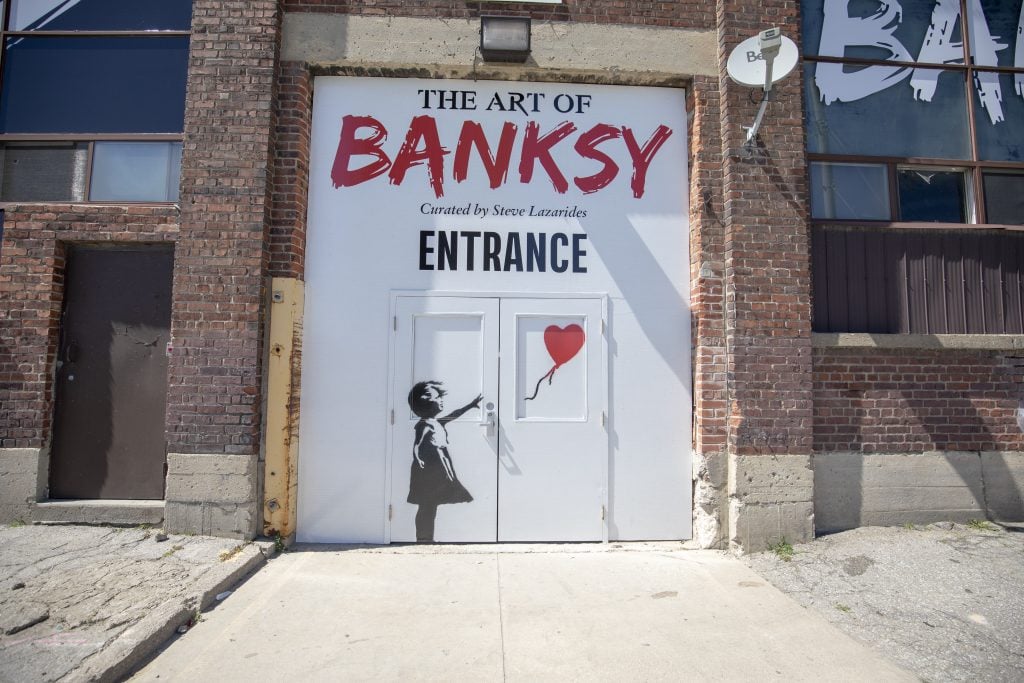 Ostensibly, the myth of Banksy was supposed to be the ultimate expression of literary theorist Roland Barthes’s plea that audiences should separate the artist from how we interpret art—but enough has been written about this modern mystery that it’s started to do the opposite, causing the secret nature of Banksy’s identity to become his defining quality, only fuelled by the artist’s own silence. And as much as Banksy is dismissive of galleries, an entire section of his book Wall and Piece is devoted to the glee he took in sneaking his send-ups into various U.K. galleries. It’s rich in compelling irony that, for an artist about whom so little is known, it’s the personal that really animates it. And regardless of what you think of Lazarides’s unauthorized take on the artist’s work, it might actually be making a more interesting, nuanced point than really any that Banksy has made since his 2010 film, since the exhibit’s very existence rides on an honesty about how the world works, about the function and place of street art, and about the importance of the personal to the interpretation of a work—like, say, the collapse of a friendship like Lazarides and Banksy’s, over some of these very issues.

While doing a walk-through of the exhibit two days before its June 13 opening—as workers hammer away and cranes beep and whirr non-stop to get the gallery ready in time—Lazarides points out one of his favourite pieces: a stencil print of a bow-tied auctioneer in a buttoned-up auction house recognizing a bid of $750.45 for a canvas behind him that reads “I can’t believe you morons actually buy this s–t.” Given the fact that he’s curated an unauthorized for-profit exhibit of Banksy’s work, that might feel close to home. Instead, he says he loves it because of a backstory that reflects his and the artist’s wildchild past: “I once did an auction and I got that man there to come and be the auctioneer. He was in his 80s. It was absolutely brilliant—it always reminds me of doing this show with him.”

READ MORE: Inside the sale of Lawren Harris’s ‘Mountain Forms’

And at another point, while discussing the ramshackle former ball-hockey gym that now houses the exhibit, the 49-year-old off-handedly—and perhaps a bit dolefully—mentions that it “speaks to the ethos of how we used to do things.” Asked about whether he feels a nostalgia for those glory days where he and his friends made artful mayhem in Bristol, he grins and waxes about how he would shoot Banksy spray-painting a space from a distance, but watch helplessly if police wandered by. “It was quite frustrating, sometimes: you want to shout out a warning, but there’s nothing you can do. Once the play’s in motion, you just have to see it to the end.”

“Rolling around in the streets with no pressure whatsoever, it was so much fun. I had the time of my life,” he says. “But all good things come to an end. He can’t run around like we used to. It was a time and place, and it was brilliant.”

With files by David Zelikovitz