Prolific even into her eighties, the documentarian has also been harbouring musical gifts that few knew about—until now, with a reissue of her stunning 1988 album 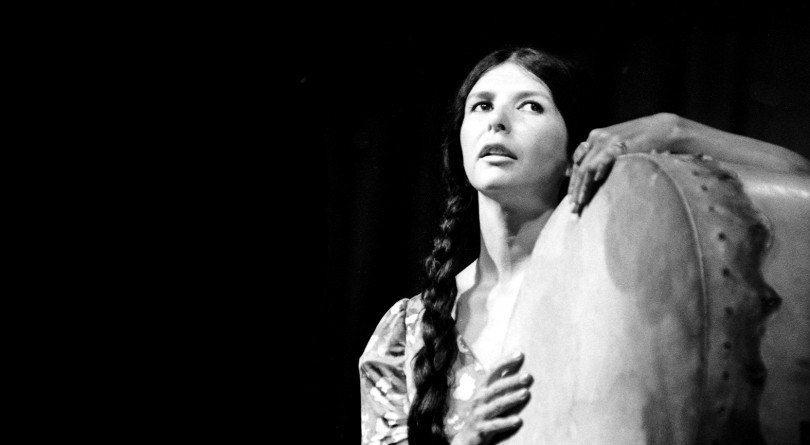 Michael Barclay is the author of The Never-ending Present: The Story of Gord Downie and the Tragically Hip.

Alanis Obomsawin has won every award possible in Canada over the course of her 46 years making documentaries for the National Film Board—incredibly, the 85-year-old is now working on her 52nd film. So you’d be forgiven if you didn’t know she was also a musician. But she’s more than that: she’s an unbelievably captivating performer who can hold an audience of hundreds spellbound with just her voice and a single drum. That’s exactly what she did at the National Arts Centre this past February at the Megaphono festival, where she performed a 15-minute set that was one of the most powerful performances I’ve ever seen in my life: part Edith Piaf, part PJ Harvey, entirely herself.

That performance was a celebration of Native North America, a 2014 compilation of lost music made in the ’70s and early ’80s by Indigenous Canadians (and one Alaskan). There are no women on that record. When it came out, I asked curator Kevin Howes why that was; he told me that outside of Buffy Sainte-Marie, there were barely any female performers writing their own material at that time, except Obomsawin, that is—but Howes told me she wanted to reissue her music herself.

Obomsawin started performing in Montreal in the early ’60s, where she hung out with Leonard Cohen. She performed in Yorkville cafés in Toronto, was an early supporter of Buffy Sainte-Marie, once played 64 shows in a month-long tour of residential schools on the Prairies, performed frequently in prisons, and booked an Indigenous stage at the Mariposa Folk Festival in Toronto for nine years running in the 1970s. Her musical career is almost as impressive as her filmography, and yet it’s a secret side of Obomsawin that few even know about—until now.

On June 15, Montreal’s Constellation Records will reissue Obomsawin’s one and only album, 1988’s Bush Lady, on the occasion of its 30th anniversary. Much like another 1988 debut record by a woman who would never record a full-length again—Mary Margaret O’Hara, who produced Miss America—Bush Lady is an astounding, genre-blurring work with an otherworldly female voice at the centre. It sounds remarkably contemporary, and not at all out of place on the same record label that birthed iconoclasts like Godspeed You! Black Emperor and Colin Stetson.

READ MORE: An essay by Obomsawin on what drives her

It’s a record so nice, she made it twice. First, in 1985, for the CBC, who paid her a mere $250 to make it. She then took the basic tracks and, in 1988, added sparse yet lush woodwinds, arranged by jazz vibraphonist Jean Vanasse, to augment her voice and drum. That version was pressed independently, though it was never properly marketed because the celebrated filmmaker got frustrated selling it on consignment at Montreal shops. Boxes of her vinyl record gathered dust in her closet. In 1990, she started working on what would become her most acclaimed film, Kanehsatake: 270 Years of Resistance. Music went on the backburner.

Then, in 2016, a young NFB employee named Frédéric Savard saw Bush Lady’s album cover in the film board’s office and asked about it. One thing led to another, and a year later, Savard started selling them on her behalf, passing a copy on to Radwan Moumneh of Constellation Records. Obomsawin was invited to play a 2017 festival in the Netherlands, and despite not singing in public for decades, she performed Bush Lady live for the first time, with local musicians playing the arrangements on a bill with punk rockers, world music artists, hip-hop acts—and Mary Margaret O’Hara herself. “I had not done a concert in many years,” says Obomsawin, still marvelling at the experience. “I still sing a chant or two, but not a full concert, which is what I did. I don’t mind telling you that I was so scared before getting on the stage.”

It was rapturously received, and Constellation offered to reissue the album. For her, the only sadness was that the man who helped her make it, violinist Dominique Tremblay—whose droning arrangement enhances the two-part title track—had died only recently, in 2015. In addition to scoring several of her films, including 1988’s No Address—a film about Indigenous migrants to Montreal struggling to survive in an urban environment, not unlike the title character of the song “Bush Lady”—Tremblay played a key role in the most memorable musical moment of Obomsawin’s career, on a night when the two of them used song to stop a riot.

It’s a remarkable story, especially in the hands of a storyteller of Obomsawin’s talents. The year was 1975, and she was covering the protests against the James Bay hydroelectric project, which would flood 11,500 sq. km of Cree land. She helped program a series of consciousness-raising concerts at various venues, including a show at Places des Arts that she captured for her film Amisk, and the Québecois poet Claude Péloquin showed up at one event at Concordia to read a piece.

“It was horrible,” says Obomsawin. “It said things like, ‘There are no more Indians. They eat beans out of a can just like we do. They don’t hunt anymore. There is going to be a dam.’ ” At the next show, at the 4,000-seat Arena Paul Sauvé, Péloquin showed up and wanted to read again. Obomsawin wasn’t having it. “I said, ‘Well, I’m sorry, but that poem is going to create a war. I do not want him here.’ ” Péloquin promised not to read that particular poem. “He came on,” says the still audibly annoyed Obomsawin, “and the first thing he did was say, ‘The people in charge don’t want me to recite my poetry, and I have this poem and they’re against it.’ And he started reciting the poem. I was so scared, I thought there was going to be a riot. There were a lot of Indigenous people in the audience.

“Then the sculptor Armand Vaillancourt ran to the stage—it was a high stage, with no stairs, he looked like a spider getting up there, I don’t know how he did it—he grabbed the microphone from Péloquin and said, ‘That’s not true what you’re saying! There are Indian people here, and it’s their territory,’ and there was this big fight on the stage. [Security] guys came on and removed the two of them. I’m standing in the sidelines watching this and I am so disturbed. Someone said, ‘Alanis, you gotta go on! You’re the only one who can stop this riot!’ They practically pushed me on the stage with my drum. I was shaking, I was so nervous. All this noise in the audience: people yelling, chairs moving.

“I start playing my drum and start singing slowly. I was still full of very deep feelings. It got quiet and people sat down. Dominique Tremblay then came on the stage and started playing violin with me. I could see his hands shaking. I will never forget this as long as I live. It was so beautiful. He had accompanied me before, but I cannot explain the feeling I had this night. I really felt he understood my feelings when I’m singing, and what I was talking about.” Sadly, there’s no film footage of that particular show, although she does have the audio.

The life story of Alanis Obomsawin is just as fascinating as any of her film’s subjects. Which prompts the obvious question: Has she ever considered turning the camera on herself or writing a book? “There is a lot of pressure on me to write a book—which I will, if I don’t drop dead beforehand,” says the lively octogenarian. “Starting in September, I’m getting organized to start doing that. Every month someone wants to make a film about me or write about me. I want to write my life myself. It will happen.”