Who should get a monument? Meet the Canadian man trying to answer the question.

Artist Ken Lum and his think tank, Monument Lab, asks what we’re trying to do when we build monuments in public places to historical figures and events 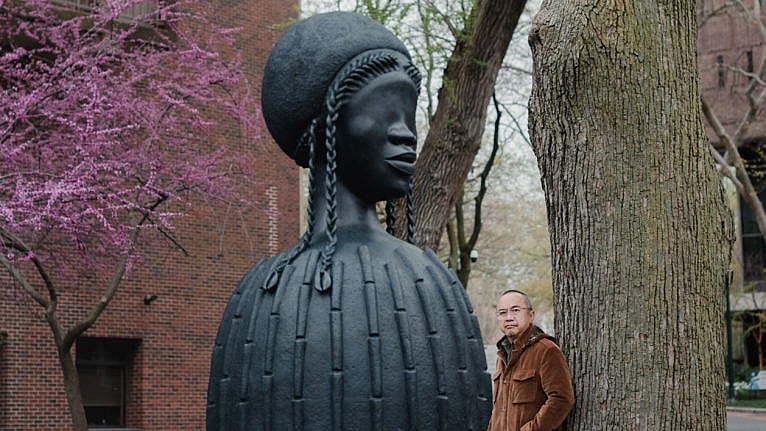 Circumstances have a way of giving meaning to seemingly odd choices. Ten years ago, Ken Lum was an important figure in the Vancouver art scene. Then, without much fanfare, he wasn’t around anymore. But when the long summer of 2020 turned into a global debate about race, memory and commemoration, it turned out Lum was in a vital, important place. In fact, he’d been getting that place ready for years.

In 2012, Lum and historian Paul Farber co-founded Monument Lab, a think tank in Philadelphia that asks what we’re trying to do when we build monuments in public places to historical figures and events.

In the United States in 2012, the political purpose of monuments was already a long-standing debate. It’s just that a lot of people hadn’t noticed. In the years that followed, as controversies over the Confederate flag and monuments to Civil War-era secessionist generals took centre stage in a succession of national controversies, it became harder to ignore the questions Monument Lab exists to raise.

READ: Monuments aren’t museums, and history suffers when we forget that

“It started as a pedagogical project,” Lum says in an online interview from his home in the Philadelphia Main Line, a suburb where the 1940 Katharine Hepburn-Cary Grant comedy The Philadelphia Story was set.

“I was teaching a class on observations I had made on my first visit to Philadelphia as a new Philadelphian, regarding the unevenness of the monumental inventory, if I can put that way, of the city.”

Lum had moved to Philadelphia in 2012 to join the faculty of the University of Pennsylvania’s school of design. Over the course of his first summer in the city where the Liberty Bell resides, he had a chance to see many of Philly’s most famous monuments. Ben Franklin, William Penn, Commodore John Barry, all the greats.

Except maybe not all of them? “Philadelphia had over a thousand statues and, at that time, not a single officially sanctioned full-figure African American—in a city that’s 40 per cent African American,” Lum recalls. “And also in the city where John Coltrane, Marian Anderson, Billie Holiday, Paul Robeson”—the legendary jazz saxophonist and three singers, each among the greatest American artists, all Black—“grew up or spent a lot of time. So I became very interested in who gets heeded and who doesn’t get heeded.”

In various ways, Lum has made a career of asking questions about who gets heeded and who doesn’t. If such things can be measured and quantified, Lum was one of Vancouver’s leading artists when he left for Philly. A soft-spoken man with a subtle but persistent mischievous streak, he grew up in Vancouver’s Strathcona neighbourhood and started studying art in his spare time near the end of a difficult undergraduate degree in other subjects. His early experience in art had not been encouraging. “I took art class from Grades 8 to 9 but stopped when the art teacher admonished me for making what he called ‘weird’ images,” Lum writes in the preface to Everything Is Relevant, an essay collection he published in 2020. His teacher “had very strong ideas about what art was and would criticize me harshly for not following his instructions to the letter.” Young Ken would have needed his teacher’s permission to study tenth-grade art, so he gave up.

READ: More than monuments: A look at America’s Confederate symbols

Eventually he made a career doing the sort of thing that infuriated that middle-school art teacher. Lum’s art is, to some extent, a set of challenges to other people’s strong ideas about what art is. Uninterested in displays of technical skill, he hires tradespeople or buys commercial products to complete his works. His “furniture sculptures” are just that, arrangements of rented furniture. His best-known piece in his hometown is his 2010 Monument for East Vancouver, a neon cross in the form of an image from graffiti art that’s been scrawled on walls and underpasses in the city’s east side since before Lum was born. The A in EAST intersects with the A in VAN, as on a Scrabble board. For a decade the monument has served as a kind of gateway to the neighbourhood.

At times, Lum has seemed to be involved in the design of monuments even without meaning to. In 1990, he was invited to contribute to the opening exhibition of a new contemporary art centre in Rotterdam, Netherlands, the Witte de With Centre for Contemporary Art. One piece he contributed was billboard-sized, a photo of a young woman working an old-fashioned adding machine. The caption is as big as the photo and not subtle: “MELLY SHUM HATES HER JOB.” It was a wry commentary on contemporary workplaces, and its tenure in Rotterdam was meant to be temporary. The museum hung it on the street outside. When the exhibit ended, people called to complain that Melly had vanished. “Every city deserves a monument to people who hate their job,” one caller said. So the museum put Lum’s piece of art back up.

READ: Education is not enough to counter monuments to history’s scoundrels

Then, quite recently, things took a surprising turn. The Witte de With Centre was named after the street it is on, which in turn was named after a 17th-century colonial Dutch naval officer who got rich ensuring the Netherlands could efficiently plunder various colonial territories. (As a grim bonus, his name translates as “Whiter Than White.”) The museum decided to change its name, and asked visitors for ideas. The winning suggestion was that it be named after Melly Shum. So since the beginning of 2021, it’s been called the Kunstinstituut Melly, or the Melly Art Institute.

While that entirely accidental process was playing out, Lum and Farber were setting up the Monument Lab. At first the organization was nothing more than a set of questions: what’s a monument? Who decides? Could it be done better? Farber is an academic historian; he wanted to write something. “I was more interested in, ‘Well, how can we make an exhibition out of it?’ ” Lum says. What would the venue be? Lum said the city of Philadelphia itself could be the venue.

In 2015, they set up an office outside city hall and asked visitors, “What is an appropriate monument for the current city of Philadelphia?” Eventually teams of volunteers fanned out across the city to ask the same question. Participants wrote their ideas on file cards. Eventually, more than 4,000 ideas were collected.

Eleven of the proposals were for monuments to soldiers of one kind or another. Sixty-eight proposed monuments to peace, and the word “peace” appeared in 168 proposals. Education was a topic in 173 proposals, the environment in 342. The proposals were sometimes highly specific, and suggested an idea of history at times starkly at odds with the one generations of Philadelphia city elders had promoted. Thirty-five people suggested a monument to commemorate the 1985 firebombing of MOVE, a Black separatist group. During an extended standoff, police helicopters dropped incendiary bombs onto the group’s headquarters. The resulting fire killed 11 people, including five children, and destroyed 65 houses.

To Lum and his colleagues, the desire for a MOVE commemoration suggested people wanted more than a procession of ramrod-straight soldiers in their public squares. “That suggested to us that the citizens, members of a public, which is heeded enough—they have longer memories and a greater sense of decency than the city itself, right?” 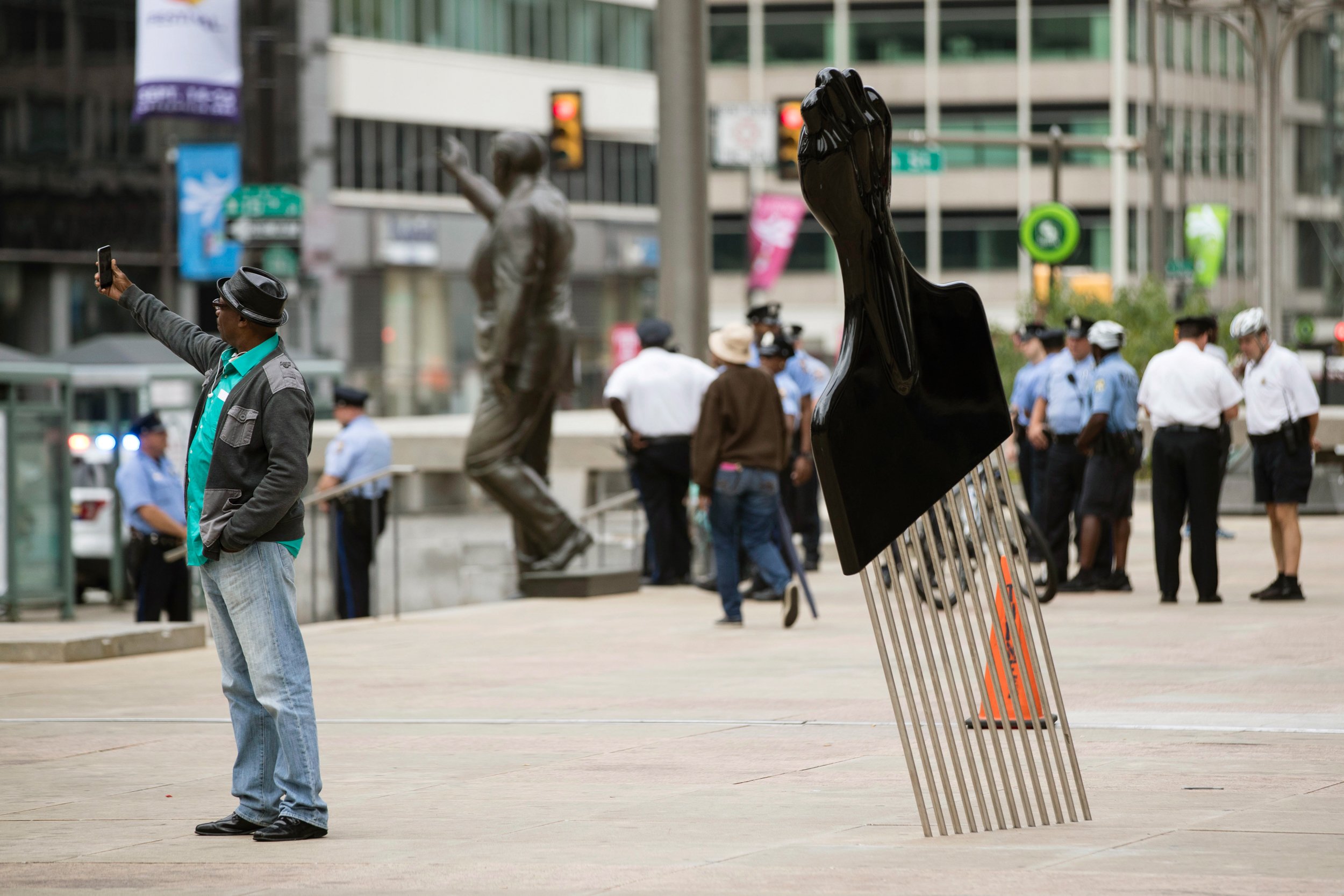 A man takes a selfie in front of Thomas’s sculpture of a 12-foot Afro pick, called All Power to All People, in view of a statue of Philadelphia’s former mayor and police commissioner Rizzo (Matt Rourke/AP/CP)

Monument Lab’s staff published the results of its inquiries as a report to the city. “The way we often talk about existing monuments and public history may severely limit our perception and reinforce the status quo,” they wrote. “We contend that it is not enough to simply say this knowledge is obscure or lost, or that it needs to be discovered or recovered by someone in the future. We must listen and take in what is already common knowledge: an expanded field of history that lives within people and places throughout the city.”

That’s one of the questions you can ask about monuments: who gets heeded, in Lum’s phrase. Another question is how. Big, realistic full-body statues sometimes make sense. There’s been one of those for Joe Frazier in Philly since 2015, an overdue real-life counterpart to the statue of Rocky, the movie boxer, that’s stood in various parts of the city since 1980. But sometimes the depiction can be more oblique or allusive. In 2017, Monument Lab invited 20 artists to build temporary new monuments around the city. Detroit artist Tyree Guyton put dozens of paintings of clocks around every side of a five-storey building: a meditation on time and its different meanings for different people.

Hank Willis Thomas, from Brooklyn, made a 12-foot Afro pick, the distinctive comb that became a symbol of Black pride in the 1970s, and stuck its tines into the ground in front of the Philadelphia municipal services building. For a time it stood within sight of a long-standing statue of Frank Rizzo, a brutal former police commissioner who was Philadelphia’s mayor through the 1970s. Running for a third term, Rizzo urged supporters to “Vote white.” In June 2020, the Rizzo statue came down; the current mayor, Jim Kenney, called his predecessor’s rule “among the worst periods” in the city’s history. Thomas’s giant Afro pick, meanwhile, is part of the permanent collection at the Pennsylvania Academy of Fine Arts.

The debates that fuel Monument Lab’s work have their parallels in Canada. As a Canadian, Lum follows these debates closely. Dundas Street and Yonge-Dundas Square in Toronto are named for a Scottish politician who is viewed by many historians as having delayed the end of the British slave trade. James McGill owned slaves. Egerton Ryerson helped design the residential school system. “Canadians overestimate their benign circumstances,” Lum says, “but there’s a lot of pernicious harm that’s been done.” Should statues come down? Lum isn’t categorical on the question, but whatever happens in every case, there should at least be more discussion and fewer resorts to the notion that monuments, as “history,” are eternal and inviolate.

“I think it’s a testament to a country’s fortitude and character that you can actually say something that is actually true” about the checkered past of previously lionized figures, he says. “It’s not like it’s being made up, or we’re impugning a country for its own sake, right? It’s not like these facts are somehow contrived.”

As most historians would acknowledge, history is about the present as well as the past. Perspectives change. “The whole project” of Monument Lab “is to un-fix the monument, right?” Lum says. “The authority of the monument. I think that’s really important because we tend to bestow this authority upon monuments, as something consensually derived, when in fact it’s particular to certain interests over other people. It’s a reflection of the distribution of power.”

This article appears in print in the June 2021 issue of Maclean’s magazine with the headline, “A line in the concrete.” Subscribe to the monthly print magazine here.