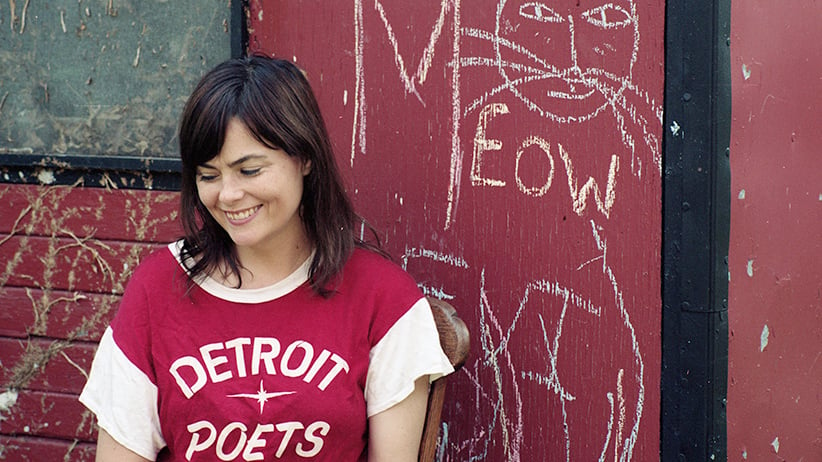 One of the Tragically Hip’s greatest hits had Gord Downie singing, in the chorus, “Don’t tell me what the poets are doing / on the streets in the epitome of vague.” The irony, of course, is that Downie is considered by a lay audience as one of Canada’s greatest poets—even if he only ever published one book of poetry (2001’s Coke Machine Glow) and his work is communicated primarily through a rock band. But what do actual poets think?

Damian Rogers is poet and poetry editor with deep roots in Canada’s music community. Every year she works with songwriter Jason Collett to co-curate the Basement Revue, which puts poets and writers on stage with musicians at the Dakota Tavern in Toronto; they’ve also staged special events at the Luminato Festival, and, with Joseph Boyden, held a concert to raise awareness for missing and murdered Aboriginal women—at which Gord Downie appeared. Her latest collection of poems is called Dear Leader.

What did Gord Downie bring to the poetry of rock lyrics?

A. I think of Gord as part of a continuum of great Canadian songwriters who are actually poets. Often in cultural conversations, when someone is incredible at something—architect, dancer, painter—the highest compliment you can give an artist working outside the genre of poetry is to call them “a poet.” It’s fascinating that we do that while generally ignoring actual poets!

What’s his relationship like to the world of Canadian poetry?

A. I’m familiar with the generosity of Gord and the Tragically Hip in the world of underground music; if they love a band, they do everything they can to make that band comfortable, with genuine love and enthusiasm. I see that same spirit in Gord’s relationship to poetry. While there are often rock lyricists who are considered poets by their fans, I can’t think of anyone of our generation, other than Gord Downie, who has as strong a relationship with the poets of this country. Not just that he’s read by poets, which he is, they pay extreme attention to his lyrics, but also he reads them. That’s incredibly unusual. He’s deeply engaged in this country’s poetry. I can’t overstate how unusual that is and breathtaking for me to see that engagement and how it plays out. And to the canon of Canadian poetry, too, via his relationship with Al Purdy. His reading of “At the Quinte Hotel” is pretty famous, but he has lent his considerable celebrity to highlighting one of the most overlooked corners of our culture.

How does that manifest itself?

A. I know he has personal relationships with poets and been very supportive—it’s not my place to describe in what way. He’s a great reader of poetry; I know that from conversations I’ve had with him. He was very interested in Ron Mann’s documentary Poetry in Motion, which we talked about when I was working on an update of the film with Ron.* I know he’s a big fan of Ken Babstock’s poetry. Al Purdy’s work is quite evident in [Downie’s] own writing. It’s not a superficial relationship [Downie has] with that body of work. I hear people say that he’s peerless as a lyricist, and I think that’s a reflection of how deeply read he is, and the attention and love he has for language. It’s evident too in the way he talks about poetry. I’ve read interviews where he talks about different books he’s reading. He makes every effort to bring the art that he loves to light, in whatever genre that is. I admire that enormously.

Why do you think he only ever published one book of poetry?

A. Well, a lot of poets wonder why they publish books at all! I can’t speculate on that. Songwriting, when it’s done at its highest level, seems effortless. But if it were as easy as it sounds, everybody would be doing it and there would be far better songs. It’s an incredibly individual skill he has. At the Basement Revue, I work with a lot of writers and musicians, and I think there is a lovely mutual admiration between the two camps.

A. When I was growing up, it was Leonard Cohen, Gordon Lightfoot, Joni Mitchell. That’s who influenced me as a poet. Music and writing are different but involve intimately related muscles. The collaborative nature that music opens up, and the relationship with the audience in a performance—if you’re a great performer, which Gord Downie is—allows you have this incredible connection with an audience. Most writers would hop the fence in a hot second if they could have those kind of experiences. What’s exciting is that Gord works in both mediums and can bring the intimacy of poetry into an arena, which is something very few people have been able to do in the last 100 years of popular music.

Of our generation in the ’90s, I think of surrealists or seemingly free-associative people like Beck and Stephen Malkmus of Pavement. Those two don’t register deeply with me in the ways Downie’s images and phrases do. Maybe that’s a cultural thing.

A. I don’t think that’s a useful comparison. Malkmus works with David Berman, who I think is one of the greatest American poets of my generation. There are different cultural reference points, but also very different aesthetics at play. I don’t think in terms of who is the best; I think of whose voice sounds authentically their own; who sounds the least like they’re trying to be someone else. For me as a poet and a huge music fan, that’s always more telling to me than comparing two different aesthetics. Gord has an incredibly consistent body of work. So does Will Oldham, but they’re radically different and I wouldn’t try to think of comparing them in any way that would be evaluative. And as an American, I have a different perspective. I’ve lived here [in Toronto] for 14 years, but I was a fan of the Tragically Hip when I lived in Michigan. They had hits on the radio there, and there is a lot of Windsor radio being played in Detroit cars. This is a band that represents something in Canada, a kind of unapologetic inhabitation of this place, elevating that to the highest level in a way that is difficult to compare. Stephen Malkmus as a lyricist can’t compete in terms of a large-scale resonance that the Tragically Hip has been able to achieve. It’s amazing to me how all these things come together with Gord: he has this tremendous love of language; he’s an incredible performer; and he’s a great collaborator, a great lover of music.

His first solo record, 2001’s Coke Machine Glow, was beautiful and rich with musical abstraction that matched his lyrics, but ever since then he still makes rock’n’roll records even with his solo band, or with the Sadies. That seems to be his anchor. He’s a rock’n’roll guy at heart.

A. It’s the nature of his talent, right? We’re all bent a certain way, and he’s bent toward rock’n’roll, and that relationship with an audience, that ability to be incredibly present in a situation where you have this enormous amount of energy behind you and in front of you. That’s rock’n’roll to me, right? Then if you can take that energy, perform within that bubble of energy, and bring poetry into that place? I can only imagine how pleasurable that is.