How Winnipeg's Forest Pavilion was built with climate change in mind

As flooding becomes more frequent across the Prairies, architects are designing newer structures with climate change in mind 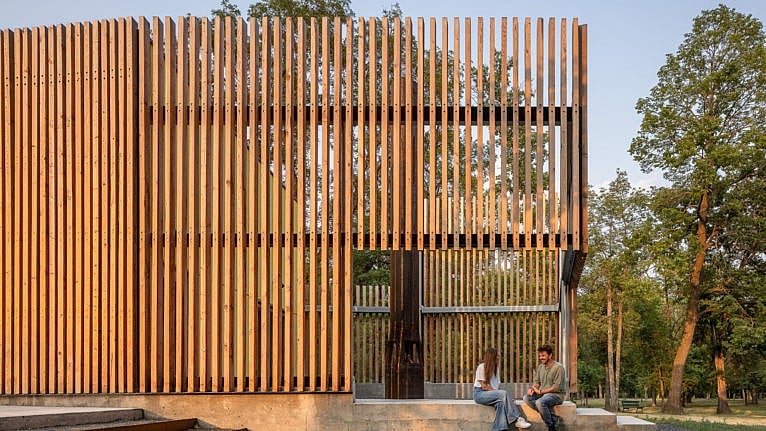 Crescent Drive Park in Winnipeg has always been a destination for trail-walking, skating and canoeing. But until recently, the park’s only standing structure was a 900-square-foot picnic shelter with a gable roof, built in the mid-1960s. It didn’t just lack architectural flair. The shelter’s open-air portico also meant it wasn’t visitor-friendly throughout all four seasons—and it was extremely vulnerable to rising river levels.

As flooding becomes more frequent across the Prairies, architects are designing newer structures with climate change in mind. Opened in 2021, and located at the park’s geographic high point, Forest Pavilion is built for life in the Red River flood zone. Liz Wreford and Peter Sampson, founders of Winnipeg’s Public City Architecture, drew up sketches for the $1.5-million project in 2015, and it ended up taking six years to complete. Back then, there were no federal guidelines on how to floodproof a building, so they had to consult American flood-design standards issued by FEMA. 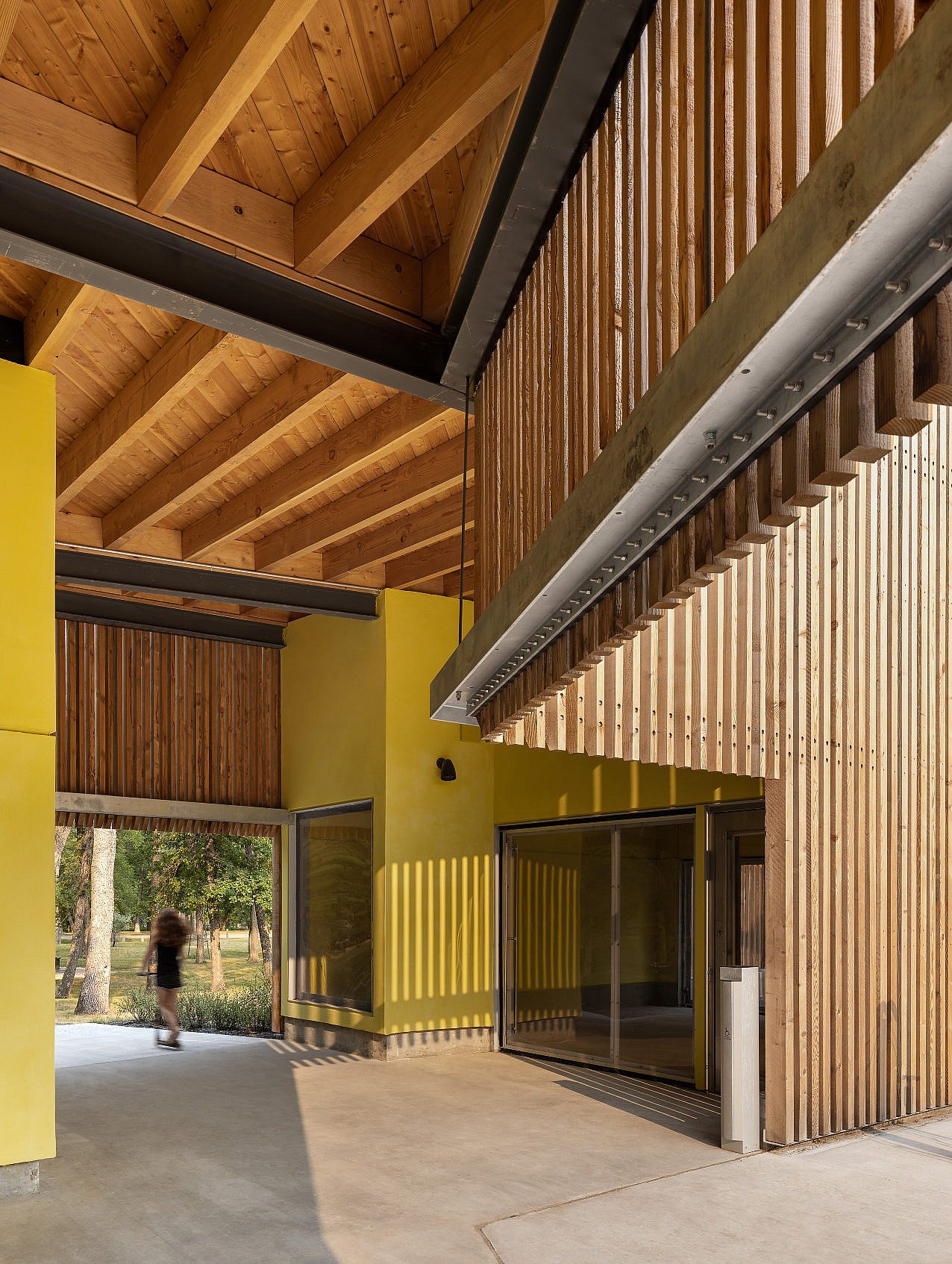 Unlike its picnicky predecessor, Forest Pavilion’s concrete base—which is below the Red River’s waterline—can stand up to a deluge. Its robust steel frame is enrobed in rough-sawn slats of Douglas fir, a strong wood that’s resistant to rot. Along with tables and washrooms, the structure’s all-season design includes an insulated room, which can function as a warming shelter or a cooling area, depending on the weather.

An open-air space, backed by a forest-inspired glowing chartreuse wall, features a fire pit made of weathering steel, with a 20-foot chimney. Visitors to Crescent Drive Park have been known to bring their own firewood, so Public City decided the building needed some welcoming touches.

“Good design leads to good stewardship,” says Wreford, who hopes Forest Pavilion becomes a go-to gathering place for the Winnipeg community—no matter the weather. So far, she seems to have gotten her wish: since its ribbon-cutting, the pavilion has housed plenty of birthday parties, cookouts and regular meetings of the local ornithological society. 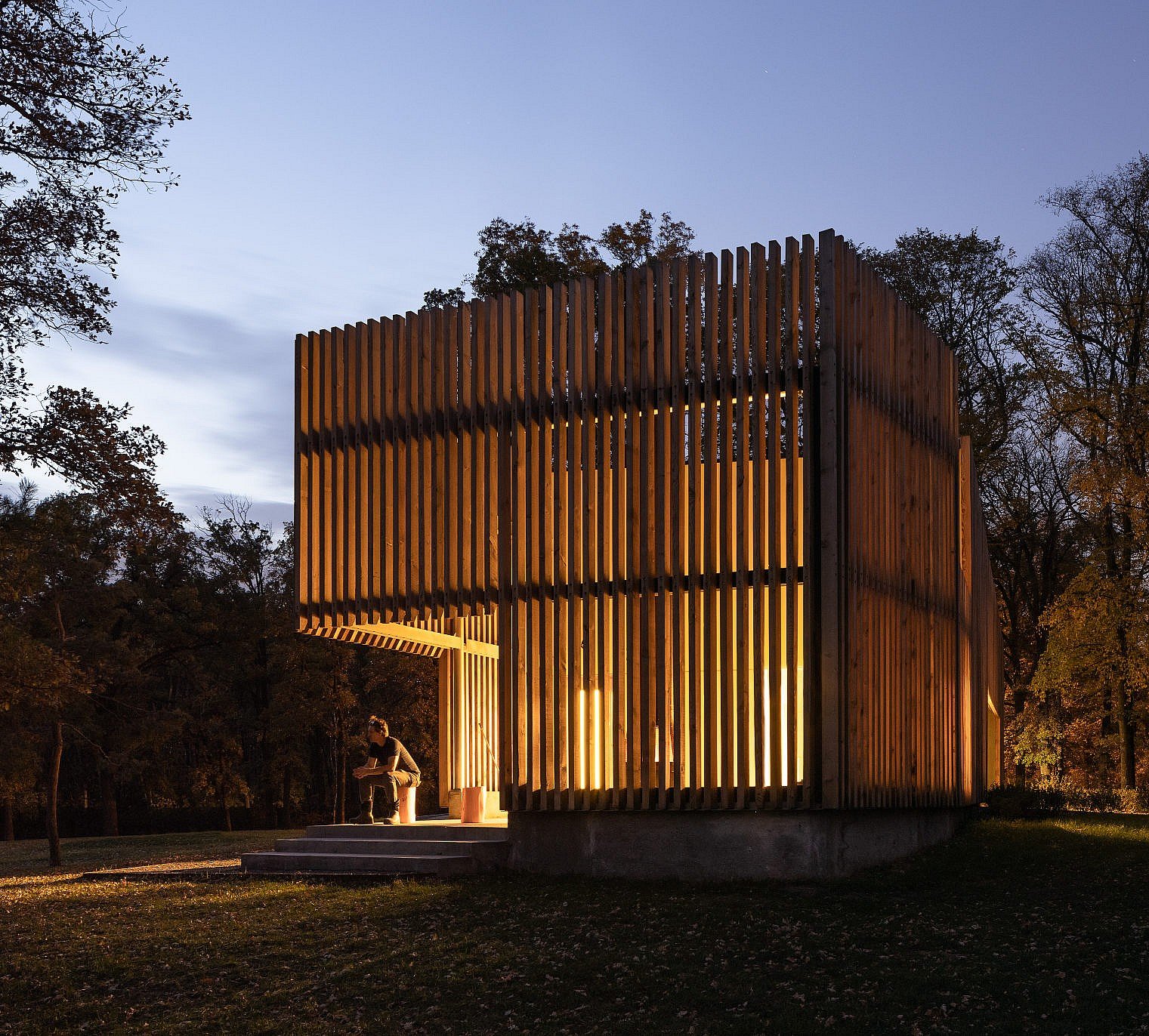