Book review: A Death in the Lucky Holiday Hotel 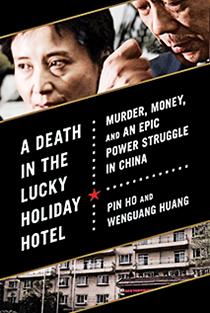 As a lurid tale of wealthy and powerful people behaving badly, the authors’ account of what has been unfolding in China since November 2011 can’t be beat. There’s the murder of British businessman Neil Heywood by Gu Kailai, the ambitious wife of Bo Xilai, an even more ambitious princeling (as the children of the founding fathers of the Chinese Communist Revolution are known), and their joint downfall. There’s even the high-speed crash of a Ferrari carrying yet another princeling (third generation, this time) and two young women, all engaged in an intricate—given a Ferrari’s interior space—sex act.

This detailed recreation argues, however, that the story is not just one of a Chinese Lord and Lady Macbeth reaching too high and falling far. It’s also part of a vicious political struggle within a corrupt regime that still lacks an orderly means of distributing spoils and high offices. Fine, except that the writers’ own scrupulousness in noting which claims are well grounded and which are not, highlights a tale that is largely a collection of facts in search of a unifying narrative.

Take the Ferrari crash, an isolated incident in that nothing else in the book depends on it. That the male driver was naked when pulled from the wreckage is mentioned as something unquestioned, but that the two women passengers were “semi-naked” is put in the “reportedly” category. The authors’ conclusion? “Allegations of che zhen (‘car sex’) have not been substantiated.”

When it comes to the murder, far more crucial to the storyline, such uncertainty is even more disorienting. Gu may not have poisoned the Briton—there may not have been a murder at all given his heart condition. It all leads to the key truth Ho and Huang do illuminate: the effect of social media on China has not (yet) been what so many hoped for, to cast a revealing spotlight on the ruling caste, but instead to fire up a kaleidoscope of misdirection and spin.