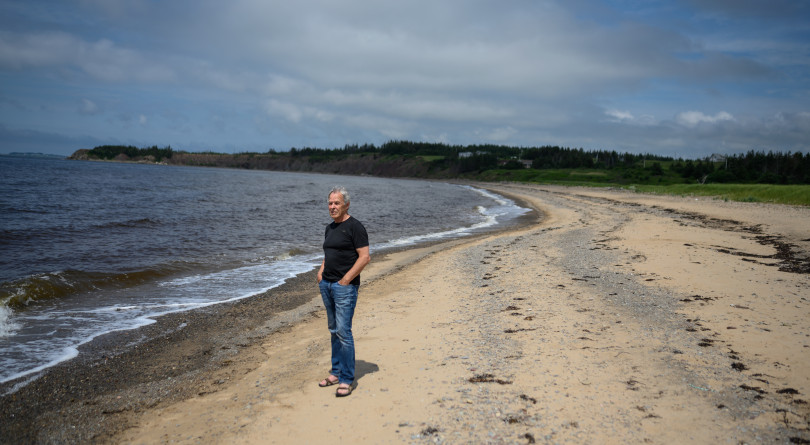 MacIntyre on the beach at Little Judique Harbour on Cape Breton Island, N.S., in July 2019. (Photograph by Darren Calabrese)

On Nov. 18, 1929, fisherman Patrick Rennie watched from higher ground in Lord’s Cove, Nfld., as a barrelling tsunami washed over his home, his wife and their four youngest children within, and pulled it into the harbour. Just over two decades later, in January 1951, Rennie fell victim to whatever combination of diseases had been ravaging his lungs for years—TB, silicosis, cancer—and died at age 60. There is a through line between those two events, hard to discern on the surface but laid bare in haunting prose by Linden MacIntyre in the most evocatively titled book of the year, The Wake: The Deadly Legacy of a Newfoundland Tsunami.

It is a story of time and chance and, simultaneously, of a kind of inevitability: one freak event occurs, within minutes killing 27 people and demolishing outports along the island’s sparsely populated Burin Peninsula; then in its wake, over decades that extend well into the 21st century, come hundreds of other deaths and palpable damage to one of the most enduring cultures in Canada. In the early evening of that Nov. 18, Rennie had a wife, six children, a home and a livelihood. By 8 p.m., only his two older sons, who had been with him, and a four-year-old daughter rescued from the sinking house remained of all that, because the codfish also vanished with the tsunami. They didn’t return in commercially viable numbers until the Second World War. Long before that, unable—and perhaps unwilling—to return to the ocean that had sustained his family for generations, Rennie had become a hardrock miner at the new fluorspar operations in the nearby outport of St. Lawrence, a workplace that would prove more treacherous than the Atlantic.

“All that is a part of the long history of remote places in this country,” MacIntyre says over the phone from a Cape Breton dock. “The consequences of bad things continue to unfold long after the event. Newfoundland at that time was particularly vulnerable because the whole world was in economic crisis. The government was in total collapse, Newfoundland bankrupt and soon to be ruled by the British Colonial Office. There was an immediate, well-intended response to the pain, but the consequences continued for a very long time afterwards, when the world was pretty blind to what was going on down there.”

There’s no doubt the death toll on the day of the disaster would have been worse had the 7.2 magnitude undersea earthquake (at 5:02 p.m.) and the tidal wave it spawned (7:30 p.m.) occurred later in the night, when everyone was asleep. But that chance sliver of luck was overwhelmed by the larger misfortune of timing, with all its future reverberations: there’s every reason to believe that had mining come to St. Lawrence during an era of prosperity and responsible government, it would never have entrenched itself in the unsafe way it did. Instead, when Walter Seibert, a cash-strapped New York accountant, learned of the fluorspar deposits and calculated his potential profit and the near starvation condition of the local population, he found it relatively easy to craft a sweetheart deal. If the local men would unload a shoddy collection of second-hand mining equipment, transport it a kilometre to the fluorspar (in demand for steel and aluminum manufacture), dig up about 1,800 tonnes of the mineral and load it for market on another ship—all voluntarily—they would eventually be paid. (Wages, when they did show up, came first in the form of chits good only at the company store, and paid out at 15 cents an hour, far below other mines’ rates, even in Newfoundland during the Depression.)

The men of St. Lawrence and the surrounding area weighed their non-existent options, agreed to Seibert’s terms and set to work in appalling conditions, without any regulatory interest from far-off St. John’s. “They were fisherman,” MacIntyre explains. “If you had never worked in a mine you didn’t know anything about what was normal. So you have no hard hats, no ventilation, no safety boots, no rain gear when underground.” 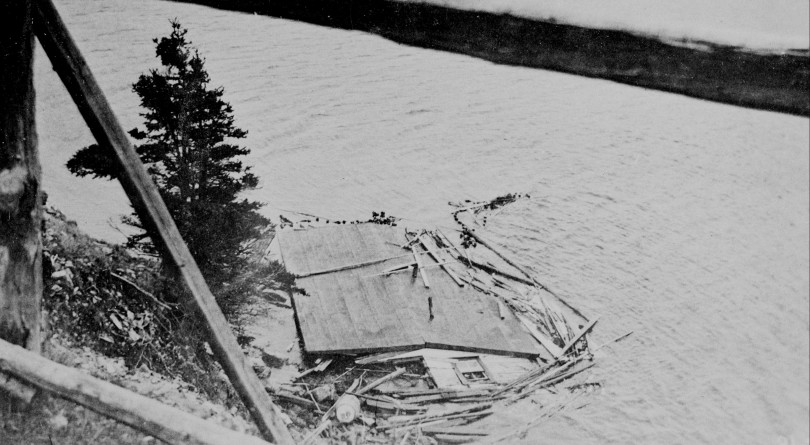 Remnants from a tsunami that hit Newfoundland in November 1929. (National Archives of Canada/CP)

It was bad enough working on or near the surface, but by 1935, when the shaft reached 30 metres underground, the workplace was a Dantesque nightmare. “From Sunday night to Saturday night, the mine was full of dust and smoke, and myself and the men would have to leave and come to the station, where we would throw up for as long as an hour,” miner Rennie Slaney, his own lungs shot, told a provincial commission a staggering 30 years after the fact. “After a while the throw-up would be mostly blood.”

There were deaths and serious injuries from the beginning in a manifestly unsafe workplace. But within a few years, the miners began to die off-site, at the terrifyingly young average age of 47. In 1965, Slaney had a list of 91 men he had known who were dead from the mine; by 2007, as lung cancer caused by radioactivity-laced water piled onto the other lung and heart disorders initiated by the dust, the toll had reached 313 miners. All the while, the mining company and the Newfoundland government obfuscated, pointed fingers, arbitrarily denied compensation to the gravely ill or their families, and questioned whether the root cause was in fact the TB that had ravaged rural Newfoundland for decades.

RELATED: In Newfoundland, a razor-close election that nobody really won

The same story, says MacIntyre, is still unfolding today, “in a lot of places where they are in the same socio-economic circumstances that were much closer to home 70 years ago. Without getting too preachy about it, the Canadian mining industry has a pretty s–tty reputation in other parts of the world. It’s what happens when you introduce an industrial enterprise to a place with basically no government, no regulation, no oversight and a whole population of desperate people with no choices.”

Yet, if the miners of St. Lawrence are an intensely Newfoundland story with contemporary global resonance, the story is also MacIntyre’s, for he, too, as he says about himself, is “a child of the tsunami.” MacIntyre, who has risen to the top of both his career arcs—winner of 10 Geminis for his work as a CBC-TV journalist and the 2009 Scotiabank Giller Prize for his second novel, The Bishop’s Man—is a Cape Bretoner to the bone. But he was actually born in St. Lawrence in 1943 after his father became one of the outside veterans—at 23, Dan Rory MacIntyre already had seven years in mines under his belt—brought in to help guide the locals when fluorspar demand skyrocketed during the Second World War. The MacIntyres left soon after the war and before Newfoundland joined Canada, leaving Linden with an entry card stamped “Landed Immigrant” when his parents brought him to their native Cape Breton.

Reluctant as he was to “parachute” into what he saw as a Newfoundland story, MacIntyre began to change his mind when he realized, “It’s also my family story, the story of my family’s economic status and the status of a whole generation of people like them.” And not just their economic status: when he was in Newfoundland on assignment for CBC in the mid-1980s, MacIntyre went to St. Lawrence to see his godmother, Loretta Walsh, “a little old wizened woman who chain-smoked throughout my whole visit,” he recalls fondly. “When I asked about her brother Alonzo, who was my godfather, she says, ‘You’ll find him over at the cemetery with all the others,’ including his two brothers. There they were, all died young—my godfather at 51, a year older than my father when he died in 1969, and his brothers even younger. For all of them it was because of where they worked.”

READ MORE: Iceberg harvesting is a swashbuckling new industry in Newfoundland and Labrador

MacIntyre is a superb writer, and his book’s two major set pieces, descriptions of the tsunami’s arrival and of the Rescue—an astonishing Come From Away prequel—have moments of heart-stopping narrative. On Feb. 18, 1942, in bitter winter conditions at the foot of a cliff, the men of St. Lawrence and nearby Lawn saved almost half the 400 sailors from two foundering U.S. naval ships. One ensign later recalled his despair as the undertow pulled him down, until “strong hands grasping, one of the St. Lawrence rescuers had him, held him, hauled him up onto the little gravel beach, where others wrapped rope around him and yet others, unseen, far above him, began to hoist him upwards.”

Yet it’s the subtle, nuanced intertwining of family and larger story that gives The Wake its power: the four interludes called “Conversations With The Dead”; MacIntyre’s youthful unawareness of how his father’s livelihood was shortening his life; his memory of a miner killed in an accident, laid out naked except for a towel across his genitals and 50-cent coins on his eyes, in one of the mines he worked in as a summer job; his recollection of the question that came to his 19-year-old mind after a talk with his father, “Isn’t it peculiar how conversations about the mining business always seem to end with someone being dead?” And then there’s MacIntyre’s 2017 dream, 48 years after Dan Rory’s death, in which he finally asks his father a now burning question: you and so many like you threw common sense and concern for health out the window to earn a living. Has anything changed? And Dan Rory’s answer: “I doubt it.”

This article appears in print in the September 2019 issue of Maclean’s magazine with the headline, “A tsunami’s reverberations.” Subscribe to the monthly print magazine here.