Stories about the milkman, family rancher, drive-in movie owner—but not the lighthouse keeper 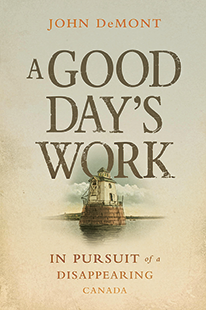 A Good Day’s Work: In Pursuit of a Disappearing Canada

A Halifax journalist and writer, DeMont is not alone in wondering, now that we have all become accustomed to doing for ourselves things that large numbers of people used to do for a living—pumping our gas, say, or delivering our milk—whether there are any of those pros left. He’s unique, though, in seeking out their dwindling ranks and recording their stories. DeMont records the experiences of a milkman (his own milkman, at that, the son of the man who delivered to DeMont’s parents when he was a child drinking that milk), a family rancher and a drive-in movie owner, among others. But not a lighthouse keeper. While there are some left—an enduring source of romance for many of us—the Canadian Coast Guard, which controls access to them, declined to let a journalist talk to one. The question of automation would inevitably come up and the Coast Guard, which takes a lot of heat whenever that issue arises, prefers a quiet life.

There is a half-century of change in the story of everyone DeMont did talk to. At 61, milkman Bill Bennett is four years older than the author, and a literally scarred veteran of intense physical labour. Only about one per cent of Canada’s milk products are now delivered directly to the consumer, down from three-quarters in the 1950s. Most goes to restaurants or to institutions—Canadians, who have varied their diets in recent years and who increasing hail from cultures that never drank much milk, now consume only half as much per capita as they did 20 years ago. A self-employed contractor, Bennett works 12-hour days and rarely takes a vacation. It’s difficult, DeMont notes, to think there are many who would line up to take his place.

DeMont makes no bones about the nostalgia inherent in his book, but he has a larger theme in mind too. The great changes in work during his lifetime, he points out, are social and human as much as technological. His “wistful dispatches from a distant era” are an attempt to capture the lives of a few individuals before they too go the way of buffalo hunters and cordwainers.