The author joins an epic expedition through Laos in search of the saola, an animal that is ‘as rare as the rarest thing on Earth’ 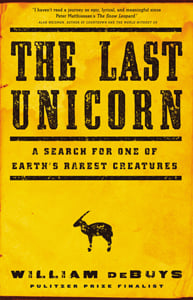 THE LAST UNICORN: A SEARCH FOR ONE OF EARTH’S RAREST CREATURES

In 1992, scientists walking through a village near the Vietnamese-Laotian border spotted something strange on the wall of a hunter’s shack: a pair of long, smooth horns, tapered to a point and curved slightly backward. When seen in profile, the elegant horns merged into one—a unicorn by perspective. After samples were sent for DNA analysis, news raced around the world of a large, new living creature, previously unimagined.

Not just a new species, the saola (about the size of a carousel pony and resembling an oryx) was a new genus with no close relatives in evolutionary or genetic terms. Yet subsequent efforts to find it came up empty. “Like the unicorn, it is as rare as the rarest thing on Earth,” writes journalist and conservationist deBuys, whose previous books, including the Pulitzer Prize finalist River of Traps: A New Mexico Mountain Life, concern humans’ relationship with the natural world. “Unless some army ranger glimpsed one decades ago along the Ho Chi Minh Trail, no Westerner has ever seen a saola in the wild.”

Hoping to become the first Westerner to do so, field biologist William Robichaud, taking with him deBuys and a team of Lao guides and porters, went on an epic quest in 2011 to the animal’s habitat in the Annamite mountains separating Laos and Vietnam. Haunted by his vigil 11 years previous at the side of a short-lived saola in captivity—the description of which is the book’s most moving passage—he leads the group on a two-month trek through wet, steep jungle that brings hunger, food poisoning, punishing heat and mutinous porters. (Even more impressive, Robichaud and deBuys were 51 and 61, respectively, at the time.)

But The Last Unicorn is also a beautifully written censure of the wildlife trade: Along the way, the group collects 970 snares set to capture all manner of wildlife for sale in Vietnam and China, where demand for wild meats and ingredients for medicinal treatments is voracious. DeBuys also upbraids the feeble conservation efforts taking place in one of the world’s most species-rich regions. In so doing, he occasionally veers into explanations of taxonomy, history and politics that might overwhelm the casual reader. But his main message, that our fellow creatures deserve protection from extinction, is impassioned and powerful. “Uncounted species—not just charismatic animals like tigers, gorillas, rhinos and saola, but an even larger number of obscure rodents, amphibians, birds and reptiles—have been pressed to the brink,” he writes. “We hardly know them, and yet within the vastness of the universe, they and the rest of the Earth’s biota are our only known companions. Without them, our loneliness would stretch to infinity.”