The brothers of Windsor, as the Second World War raged 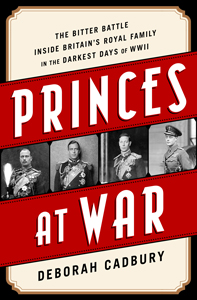 PRINCES AT WAR: THE BITTER BATTLE INSIDE BRITAIN’S ROYAL FAMILY IN THE DARKEST DAYS OF WWII

Today, the Allied victory in the Second World War seems inevitable. Yet the first half of the war was marked by an unremitting deluge of bad news for Britain and its few allies. The German blitzkrieg swept across Europe while Japanese forces were moving through Asia. Britain stood alone in Europe, certain to be invaded. In Cadbury’s absorbing, often riveting look at the four brothers of the house of Windsor, she interweaves their lives with the war and political crises. It was a time that tested the mettle of families. Three siblings rose to the challenge; one stumbled into ignominy.

While George VI was being bombed in Buckingham Palace, his stolid brother Henry was strafed by the Luftwaffe in France, and their charming, elegant sibling, George, narrowly missed death on an RAF airfield (in 1942, he would die in an aircrash). Meanwhile, their eldest brother, ex-king Edward VIII—who had an infamously cozy meeting with Adolf Hitler in 1937—fretted about whether the Germans could safeguard his possessions in occupied Paris.

All too often, royal biographies of this era revolve around one figure—usually Edward VIII or George VI. By deftly showing the interplay between all four, the author explores the strains and stresses that enveloped the brothers and puts their tense relationship within the broader dynamics of the family, which included their European relations, some working for the Nazis, others caught in the maul of war.

George VI, tentative and unsure in 1939, is transformed into a confident king. On the other hand, Edward VIII is all but ruined by his vocal anti-war beliefs and close contacts with Nazis and their helpers, not to mention a whiny inability to see beyond his own selfish needs. He drives his brothers, as well as the British and American governments, to distraction. By the time thoughts turn to his postwar role, sympathy is exhausted. As Alan Lascelles, the monarch’s private secretary, states, “There is in the British cosmos no official place for an ex-king.”