A Serial Killer in Nazi Berlin 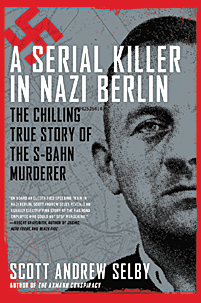 A Serial Killer in Nazi Berlin: The Chilling True Story of the S-Bahn Murderer

Crimes committed during the Second World War, as opposed to war crimes, have long been the purview of mystery novelists. Lately, however, they’ve been getting their due attention from non-fiction writers, as well. David King’s superb Death in the City of Light (2011) chronicles the murders committed by French physician Marcel Petiot in Paris, demonstrating how the Nazi occupation of the city created the perfect ecological niche for him. (Petiot ran a fake escape line for desperate refugees fleeing the Third Reich who thought he would smuggle them to safety in Spain; when the decomposing bodies in his basement were discovered, French police thought they had stumbled upon a Gestapo torture chamber, while the Germans thought perhaps the Resistance had been killing collaborators.) And, in much the same way, the killer at work in Berlin, the very centre of Nazi power, also found an environment tailor-made for him.

Paul Orgorzow, 27, had already committed more than two dozen sexual assaults by the summer of 1940, when a near-capture convinced him that only killing his victims would assure him of safety. As an employee of the S-Bahn, Berlin’s above-ground rail link between suburbs and city centre, Orgorzow was free to troll its late-night trains and embark on his murder spree. He would approach single female travellers with cheap third-class tickets, and invite them to sit in the often empty second-class carriage. Reassured by Orgorzow’s uniform, many accepted; between stations, he would smash them over the head with a blunt object and throw them, alive or dead, out the door of the moving train.

Nazi-era deference to uniforms was only one of the factors that fuelled Orgorzow’s success. He was exempt from conscription as an essential war worker, but, with millions of men in the army, their places in Berlin factories were filled by women, and he had a plentiful supply of late-shift victims; the ferociously enforced blackout (police were authorized to fire their pistols through windows that emitted light) made it easy for him to disappear into darkness and also confuse police with the sheer number of bodies it produced on its own—in December 1940 alone, 28 people died on the S-Bahn, falling off pitch-black platforms or struck by unlit trains.

Most helpful of all, though, was the press blackout. The Nazi leadership, obsessed with the idea that the First World War had been lost by a collapse of morale on the home front, would not allow any media coverage, forbidding investigators from appealing to the public for aid. By the time the police, working their way through 8,000 railway workers, finally zeroed in on Orgorzow’s loud misogyny—which an open investigation would have exposed much earlier—he had killed eight women.

Orgorzow is of minimal interest himself, and Selby’s sloppily edited account—it’s doubtful the Berlin police, despite being called to “grizzly” murder scenes, ever contemplated a bear as the perpetrator—is devoid of the suspense King brought to Petiot’s story. But A Serial Killer remains a compelling read, the story of a tiny handful of the war’s millions of victims.