A serial murder tale where the real villain is human nature 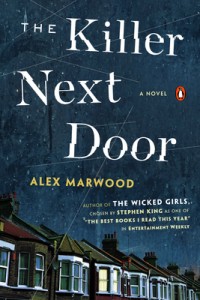 THE KILLER NEXT DOOR

Alex Marwood’s first suspense novel, The Wicked Girls, garnered a slew of nominations and prizes—most notably, the prestigious Edgar Award—for its deftly told story of a girlhood friendship irrevocably fractured by child murder. Marwood’s empathetic yet pragmatic understanding of human nature at its worst and best is in equally fine form in The Killer Next Door, set within the tight confines of an increasingly foul-smelling, claustrophobic South London building that houses a series of terrible secrets.

Twenty-three Beulah Grove is a last-resort kind of place, one where you get what little you pay for and which demands little from you in return. The six current residents—Collette, Vesta, Cher, Hossein, Thomas and Gerald—have ample reasons to hide out: stolen money, abusive relationships, that sort of thing. They also do their best to steer clear of the perverted, corpulent landlord, who expects certain gratifications from the female residents who pay his way-below-market rent. But one of the residents—and Marwood smartly keeps the reader guessing for a good chunk of the book—is up to even greater misdeeds, the extent of which dawns on the rest of the house only after a particularly sweltering night when the stench is simply too powerful to ignore.

Yes, The Killer Next Door can be thought of as a serial murder tale. The reader is even privy to the killer’s thoughts, more prone to banality than grand plans. But the killer is just one of many outcasts at Beulah Grove, responsible for his or her actions but very much the product of the broken, austerity-ridden British society that created all of them—people like Vesta, who has lived at Beulah Grove much of her adult life and, nearing twilight, cannot imagine a world beyond its confines. Marwood, with deep intelligence, shows us their fears, shattered dreams and faint hopes. And how, in the quest to protect ourselves from harm, it’s so easy to look the other way when greater crimes happen almost in front of our noses.