As though motivated by E.M. Forster’s dictum to “only connect,” the five key characters of McWatt’s magnetic sixth novel are muddling through. 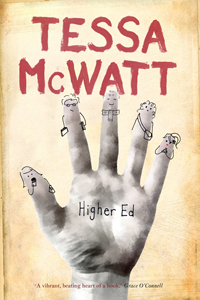 Situated within a select group of metropolitan-England-today novels that range in outlook from despairing to hopeful (Stephen Kelman’s Pigeon English, Gautam Malkani’s Londonstani, Margaret Drabble’s The Radiant Way, Zadie Smith’s NW, and Jackie Kay’s Trumpet), Higher Ed stands in the sensible middle. As though motivated by E.M. Forster’s dictum to “only connect,” the five key characters of McWatt’s magnetic sixth novel are muddling through. Between an employment landscape that’s unsteady and eroding, and relationships that are ruinous or hobbled by circumstances, they’re nevertheless taking small, cautious steps forward and seeking out both a meaningful existence and people to share it with.

A self-critical, middle-aged American who has fled a long-term but dead-end romance, Francine is an administrator at a belt-tightening university, where fretful Robin lectures about film. Francine’s junior, the prof is oblivious to her warmth. He’s also anxious about departmental cuts and a pregnant ex-girlfriend, while being newly attracted to Katrin, a Polish server struggling with café work and puzzling English social norms. Robin’s student, Olivia, and Ed, the Guyanese-born man Olivia believes is her estranged father, complete the multicultural cast.

Across a series of chapters devoted to these questing figures’ histories and experiences (the language of each section cleverly reflecting that character’s particular idioms, from TV earworms and generational slang to literary theory), McWatt conjures a familiar world of uncertainties, in which fallible but striving individuals find basic needs—security, community, bonds—difficult to attain. Kind to her characters, but never blind to their iffy choices or restrictive circumstances, McWatt gradually grants the members of this loosely interrelated tribe some respite. Her generous vision suggests that people might not get exactly what they desire, but, since the world’s a huge, complicated place, it may provide them with something else, something ultimately beneficial.