Adam Weymouth tracked the journey of the Chinook salmon by canoe—all 3,000 km of it—and returned with a new respect for the North. 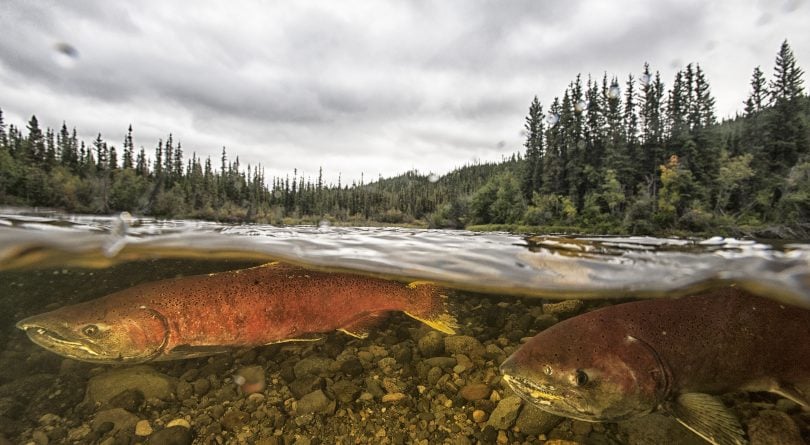 The salmon is not just a fish. It’s a culture. What the buffalo was to the First Nations of the North American Plains, the salmon is to the people of the Pacific Northwest. It used to be abundant up and down both coasts of the continent, but major hydroelectric projects and overfishing put an end to that. The largest remaining salmon run in the world is on the Yukon River, with headwaters at McNeil Lake, northeast of Whitehorse, and emptying into the Pacific in the western Alaskan town of Emmonak, more than 3,000 km away. Like the buffalo, the Chinook salmon—which the Americans call king salmon—is near extinction, threatening all adjacent society, but Indigenous cultures in particular.

British writer Adam Weymouth canoed those 3,000 km to explore the sanctity of the salmon’s journey. His observations and deep research form Kings of the Yukon: A River Journey In Search of the Chinook, a work that is equal parts travel writing, social science, biology and modern anthropology. The book demonstrates that people born to the North and people who have chosen the North share a generosity and resilience, as well as a sense of fatalism that comes from watching the world fall apart to the south. One man, originally from Boston, says, “There is at least one glimmer of hope: when the world comes to an end, the fish will recover just fine.” That suspicion of outsiders can be problematic when governments impose conservation measures, as in 2014–15, when an outright ban on fishing for Chinook was enacted on both sides of the international border along the Yukon River.

Salmon is a great metaphor for humans’ God complex: we alter the environment to meet one need—e.g. hydroelectricity—then realize what we’ve messed up, so we come up with an elaborate scheme to remedy that, and a cycle of folly begins. Weymouth writes about how, in Washington state, fish are put on trucks and driven to the top of a dam. On the Columbia River, they’re taken up in helicopters. And how “a company called WHOOSHH Innovations has a ‘Salmon Cannon’ that will suck fish from the bottom of a dam and fire them out the top at 20 m.p.h.”

Nothing that innovative is happening in the North, but he notes that Indigenous knowledge is finally being factored into scientific decisions. “Science is very good at ﬁnding minutiae . . . whereas Indigenous knowledge is a more holistic understanding of what needs to be researched in the first place, and seeing those changes first-hand,” he says in an interview. “Very heavy-handed conservation measures have been done very badly in the past; they haven’t been run by people whose lives they’re going to affect. It’s not just a single-point issue.”

It’s also different on either side of the border. He notes that many Canadian communities voluntarily cut back on fishing in the past 20 years, “which was an enormous sacrifice, but they chose to do it for future generations in their community,” he says. “Whereas on the Alaskan side of the border, these villages are strictly under state control about where and when they can fish, and people seem inclined to try to get away with what they can.”

Being neither Canadian nor American nor Indigenous nor even from a northern country, Weymouth is most definitely an outsider here, drawn to the area with a sense of awe gleaned from books by Jack London, Chris McCandless and Farley Mowat. “It’s hard not to feel like an imposter,” he admits. Travel writing is, by nature, written by outsiders. In 2018, however, this becomes more fraught, especially when writing about Indigenous communities. A note in the preface assures the reader that “interviews in Canada were carried out according to the Traditional Knowledge policies of the First Nations involved.”

Explains Weymouth, “Being granted access to some of these places involved meeting a lot of elders and explaining what I wanted to do. Those stories are their culture and heritage and they don’t want them to be distorted by any writer who wants to make a quick buck. While that was initially frustrating—as a journalist, I wasn’t used to doing that—I think it’s fantastic, and I don’t think those chapters are any weaker for it.”

One thing Weymouth does take is a lot of offers from river residents offering him salmon. In a book about depleted stocks—set in a land where, in recent memory, some fisheries used to haul in 14,000 salmon a day, some between 40 and 50 lb.—Weymouth writes, “I do occasionally consider the ethics of investigating a fish’s decline whilst stuffing my face with it.” But when in Nome…

“It felt like this unifying factor,” he says. “It was only while travelling the river at a much slower pace that I realized just how entwined it was in the culture, and eating it is such an important part of that. So many people prepared it different ways and wanted us to try their way of doing it. It’s a remarkable lifestyle.”