Why adultery remains illegal in 21 states 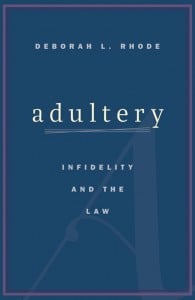 In 2010, a 41-year-old New York married woman was caught having sex on a public picnic table with a man who was not her husband. The district attorney charged both with public lewdness, but the woman was slapped with another charge: adultery, a misdemeanour offence punishable by up to 90 days in jail or a $500 fine. She had the same reaction as a 61-year-old Chicago man sued for adultery by his lover’s husband in 2004: “Is this for real?”

It most definitely is. Sex between a married person and anyone who’s not their spouse remains illegal in 21 states. Charges are infrequent, and punishments range from a $10 fine to life imprisonment, but archaic laws—their roots in ancient cultures, Christian dogma and Puritan moralism—nonetheless linger in modern courts around the world. How and why is the heart of this book from Rhode, a law professor at Stanford.

Rhode’s scope is historically and geographically massive, from ancient Babylonia to Hawthorne-era New England to Eliot Spitzer, making for a fascinating comparative study. Even today, impossible contradictions exist across countries and culture. In France, the transgression is so forgivable that president François Mitterand’s mistress sat alongside his wife at his state funeral. Adultery is not even grounds for divorce in Russia, while in the arguably more progressive U.K., Prince Charles and Camilla Parker Bowles’s long-term affair caused an uproar in the Church of England.

Rhode zooms in on America, which is no less contradictory. Ninety-nine per cent of married Americans expect sexual exclusivity but somewhere around 20 per cent cheat (or much more; Alfred Kinsey estimated 50 per cent of men had strayed from their marriage, and Shere Hite in the 1970s reported 70 per cent of women had). These polls, of course, are notoriously unreliable. One psychiatrist says, “If someone is going to lie to their husband or wife, they sure as hell are going to lie to a polltaker.”

The 20th century saw the skyrocketing of sexual liberalization—and of public disapproval of affairs. Seventeen presidents have had known affairs and mostly we agree it’s none of our business, while gobbling up the details. Meanwhile, in the military, explains Rhodes, hundreds are charged each year and leaders like David Petraeus often resign in disgrace when affairs are revealed, despite a widespread “wings up, [wedding] rings off” mentality. Without any consensus or consistency, argues Rhodes, “the United States should repeal its civil and criminal penalties.”

What’s fascinating outside America, where adultery is often not illegal, is not the law, but as Adultery chronicles with impressive dedication, every strange and salacious story that brought us here.