Clever sentences at high frequency about the future of media 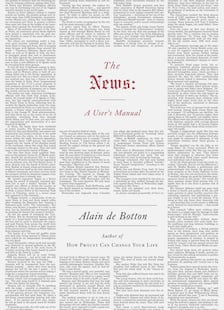 Alain de Botton is right: we rely on the news for most of our education after we graduate from classrooms, yet we consume it in vast quantities without paying much attention to how it affects us. In The News: A User’s Manual, de Botton analyzes the many species of news while erecting a utopian vision of what it could be.

Imagine: political news that investigated the concealed and “colourless institutional failures” plaguing our society, not gaffes; economic news that revealed the “human realities” behind the production of the products we buy, not inert numbers; celebrity news that highlighted the ennobling beacons of humanity, not the inanities of the Kardashians; and world news that humanized the Other instead of reporting only the bloodiest crises.

Yes, de Botton acknowledges the economic necessities driving news output. But he attributes many of the shortcomings of journalism to its failures as art. It is harder for readers to learn or care if they are not swept into broader narratives. Manic buffets of facts are insufficient. De Botton thinks newsreaders are shoved three inches in front of giant and complex canvases. Up too close, the Mona Lisa is a blob, and Congo is a place where people go to die. The reason readers don’t click on stories about Congo is because they are badly told, this writer argues, not necessarily because of indifference.

De Botton, as is his wont, smuggles in a fair amount of self-help advice into his analysis. (For example: “We must both register and yet at the same time not fixate upon the sadness and pain with which the news seeks to confront us at every turn.”) He dissects the news with fierce intelligence, but he also wants to soothe us and make us better. We are instructed to be kinder to each other, to be introspective and so on. On the whole, beyond his maudlin tendencies, de Botton is consistently entertaining and smart.

I want to say de Botton writes beautifully, but it’s more like he writes clever sentences with high frequency. He is a master of pithy erudition. A reader who keeps a pencil on hand is likely to pepper the margins with exclamation marks to honour de Botton’s learned smackdowns. And yet the book lacks flow. Short chapters are further divided into micro-sections, which can have the feel of disjointed musings. This book is fit for a resting spot in a bathroom, but is no less profound for it.