The author takes inspiration from The Sopranos, The Wire and—in his new book, The Force—hip-hop 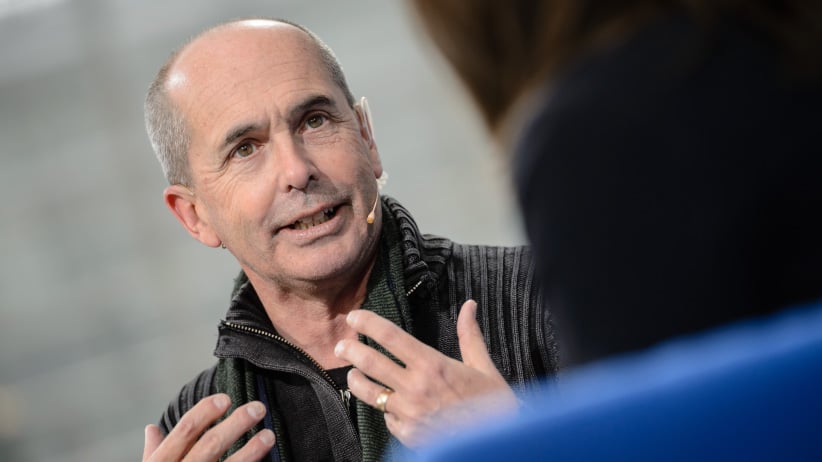 American author Don Winslow is seen during the Leipzig Book Fair 2016 on March 18, 2016 in Leipzig, Germany. From March 17 to March 20 more than 2000 exhibitors present their products of the publishing and media sector. (Jens Schlueter/Getty Images)

Don Winslow is one of North America’s best contemporary crime authors, the author of Savages and The Cartel. With his new policier, The Force, set in New York City, Winslow has an instant bestseller in the U.S., Canada, Italy and Germany.

Passionate and outspoken, Winslow writes in the third person, but with a first-person point of view. He doesn’t pull his punches, whether in prose or talking from his San Diego studio, as fire engines and police cars race by. Maclean’s conversation with him (lightly edited and condensed for clarity and length) covers policing and politics, guns and drugs, and inspiration from The Wire and The Sopranos.

Q: I appreciate that you’re politically engaged. How are you finding being in North America at the moment?

A: Well, it’s interesting times. I wish things were different. The news this morning, the attack on congressmen, is terrible. Thoughts and prayers out to those people on whatever side of the political divide.

A: No, listen I agree. We need to do something about gun violence in America. But every time one of these things happen, we say the same thing, and then we don’t seem to be able to do anything. And that needs to change.

Q: Richard Ford is a lifelong, multiple gun owner. He told me, “The National Rifle Association is a domestic terrorist organisation that tacitly supports the killing of children more than it supports reasoned gun legislation.”

A: Yeah, I don’t think that I’d argue with that description. I know Richard. In fact, I hung out with Richard in Auckland, New Zealand of all places. He and I had a 20-minute discussion over dinner on the best method of removing porcupine quills from dogs’ noses. He is an outdoor kind of guy.

Q: Do you think there’s any hope for gun control?

A: Well, there’s always hope for everything. But I am not optimistic of seeing serious strides on that in the near future.

Q: What might surprise people or challenge people about The Force?

Q: I have a lot of criticisms of American cops and policing. At the same time, I do think they’ve got a really difficult job. They didn’t solely create America’s culture of gun violence, or the craziness and inequality in America.

A: I agree with that, and let’s take it a step further. They didn’t create that atmosphere, they’re the ones though who have to live with it on a daily basis. These are generalisations; you can’t make generalisations about hundreds of thousands of people. The New York Police Department, for instance, has 38,000 police officers in it. But most cops, when I talk to them, desperately care about the victims of gun violence. They see it, they experience it. They’re the ones who are in the emergency rooms. They’re the ones who go to the morgues. They’re the ones who have to go tell the families that their son is not coming back, their husband, their wife, is not coming home that night. So when we talk about guns and gun violence and police, let’s understand that as well. No one wants guns off the streets more than cops because cops are killed by those guns.

Q: Stephen King ranks The Force alongside The Godfather; I’m reminded of The Sopranos—ten years done, but forever with us.

A: It was such an iconic program for all of us. In researching The Force, as a matter of fact, I was researching some of the modern-day figures that The Sopranos were moulded on. So many iconic Sopranos moments. People talk about, of course, the “Pine Barrens” episode; one of my favourites was the one where they bought the house by the ocean. And James Gandolfini and Edie Falco had an incredible scene together in the kitchen of that house that looked like it was about to explode. That was an iconic series that changed the way we did television. It is also an extremely realistic portrayal of the mafia. Much more so than The Godfather. The Godfather, one of the greatest films ever, but let’s face it, a romanticized version of the mob.

RELATED: Remembering James Gandolfini, the model for every anti-hero on modern TV

Q: Like The Sopranos, your writing has the realism and vernacular of real life.

A: I try to pay attention to language. I think that as a general rule, we as writers talk too much and we should listen more. So part of what I like to do is pick a round of places and just sit and listen, and catch inflections, and catch rhythms. And I read my dialogue out loud to myself because I think that’s when you catch the wrong notes and the wrong tones.

Q: The Force has also been compared to The Wire. Can you comment on The Wire’s inspiration?

A: Yeah! You’ve picked two of the greatest cultural events on television in American culture. I love The Wire. One of my favourite lines is very early on when the main cop in it, [Jimmy] McNulty, is watching these guys gamble and he asks: “If Snot Boogie always stole the money, why’d you let him play?” And the kid answers: “Got to. This America, man.” It’s become a catchphrase of mine. Some people ask me [questions] and I say “Got to. This America, man” [laughs].

Q: A la The Wire, you bring such realism and detail to the worlds you create in The Force.

A: Well, the devil’s in the details. The way I view my job is to bring the reader into a world they otherwise could not enter and let them see it through the character’s eyes. And you can only do that with detail. The details make the characters distinct from one another. If you can give them those little grace notes, those little touches, that’s what makes the reader relate.

Q: You tweeted about Scott Pruitt: “You couldn’t write a character as bad as Scott Pruitt, the EPA ‘administrator’—no one would believe it. Your editor would say “cartoonish.”

A: [Laughs] Look, I think one of the problems with being a fiction writer these days is that you can’t keep up with the headlines. Things that people would say are absurd occur the next day or they come out of somebody’s mouth. There are days I just wanna give up. I’m writing a book called The Cartel, and then a politician says, “Well, the Chinese built a Great Wall and you never saw any Mexicans get over that.” I can’t compete with that.

Q: Yeah, some of these Trumpkin characters, they really are cartoons.

Q: The Force is No. 2 on Canada’s bestseller list. Is there a Canadian connection with you and your work?

A: My grandmother was from Guelph, Ont. I grew up playing ice hockey, I’m a massive fan. A great-uncle who was in the early days of the NHL played for the Chicago Blackhawks. The Force deals a lot with the heroin epidemic, which I’m sorry to know people are experiencing in Canada.

Q: I had an interesting chat with Tony Bourdain about this. He talked about how Big Pharma has exploited America’s opioid and heroin crisis.

A: [Laughs] That sounds like Anthony. He has a point. I’ve said it before: if you’re black and you sell dope, you end up in the big house; if you’re white and you sell a large amount of dope, you end up visiting the White House. So it’s a matter of race and it’s a matter of scale, frankly. Look, what happened with the opioid epidemic is the Mexican cartels made a very deliberate, corporate decision to undercut the price of opioids. What they discovered was they could increase production, increase potency and decrease the price, and sell it for a third of what the Big Pharma could, or street dealers could, for Big Pharma pills. So when you see a lot of these people shooting up heroin now and tragically dying from it, they’re going out into the street and buying this, what’s called “cinnamon heroin,” which is now too often laced with fentanyl and other enhancers that are much stronger than the drug they were used to taking. So they take a larger dose and overdose. North America, and to a slightly lesser extent Europe, is being flooded with this Mexican heroin as a direct result of the attempt to undercut American pharmaceutical companies. So it’s really big corporate drug trafficking organizations like the Sinaloa Cartel versus Big Pharma.

READ: Anthony Bourdain: ‘Look, it’s not normal, what I do.’

Q: Hip hop is an influence on The Force, isn’t it?

A: It is, very much! I needed a younger musical metaphor than normally I would bring to the table. I’m a jazz guy and a Springsteen guy. So I wanted something more current, and edgier, and angrier. So I asked my kid to educate me about hip hop; he has an encyclopedic knowledge of it. And he did so. I found it to be much richer than I would’ve thought. I think some of the poetry in it is really spectacular. I threw rap into the book. I think I mentioned Kendrick Lamar. I’m really into Tupac these days. I love Nas, N.W.A.

Q: “The writer exists by writing,” Viet Nguyen told me. What do you make of that?

A: That is absolutely the truth. It’s a verb before it’s a noun. I’ve been writing since I was six years old. It’s hard to imagine stopping. I would hate to think that I’ve already written my best book.

I am 300 manuscript pages-deep into the next book. It’s the third and, I emphasize, final instalment of the drug trilogy, after The Power of the Dog and The Cartel. I was hoping, frankly, that there wouldn’t be any more story to tell after The Cartel. That proved to be a false hope.

Q: What’s been a highlight with your different film adaptations?

A: Shane Salerno and I adapted my book Savages together, and I learned a lot about adaptation. I think it’s an extremely difficult thing to do; adaptation might even be more difficult than writing an original screenplay. It’s so much a matter of choices, making choices of what to leave in. It was an education.

Q: And Ridley Scott, with The Cartel?

A: Ridley’s obviously an iconic director, he’s made some fantastic films. Obviously a very smart, very tasteful, thoughtful guy. So yeah, I’m in good shape; got Ridley Scott with The Cartel. I’ve got James Mangold directing The Force; David Mamet is adapting the script. Life’s good.

Q: You go to some dark places in your work. Anything particular you do to balance that?

A: Yeah. Look, I have a life, I have a wife. I have an adult son who I’m very close to, and friends. I go hiking almost every day, four to six miles. In the summer, I’m out surfing or swimming. I think that real, human relationships with people mostly balance that out. But also, being physical, just working that stuff out. I have a heavy punching bag right here in the office. In fact, I was one-handedly hitting it a little bit as we speak [laughs]. Those things help.
Alexander Bisley interviewed Joey Pants about The Sopranos.