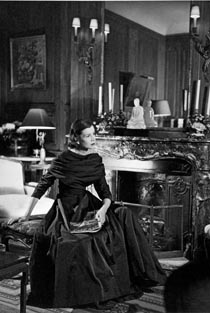 Susan Mary Alsop once told her lover, Duff Cooper, the British ambassador to France in the mid-1940s, that she was more at ease as a mistress than as a mother, and would choose him over her two young children in a flash. “I have just about reached my maximum Dufflessness,” she wrote during one of their separations, and her yearning for the man who brought her into his orbit of history, literature and power is palpable.

Throughout her life, she sought out such privileged men and women in Paris, London and Washington through whom she could observe “history on the boil,” as Nancy Mitford once observed of her.

Alsop’s life was defined by connections. She was a descendant of John Jay, the American founding father. Her first marriage, to Bill Patten, took her in 1945 to Paris, where Bill worked at the American embassy. Here, writes de Margerie, she discovered her genius for knowing just “how to mix people and ideas, how to lower the lights, and how to spice up conversation with alcohol.”

She was also an avid correspondent. De Margerie had access to 500 letters Alsop wrote to Cooper during their six-year affair, as well as the voluminous exchange with her dear friend Marietta Tree during the Paris years.

Men were her ticket to power. When Cooper died in 1954, she took up with Gladwyn Jebb, a successor at the British embassy in Paris whom she had previously described as a “cold poached egg type.” Soon after Patten died in 1960, she married the brilliant though hawkish journalist Joe Alsop—funny, cultivated and homosexual (his bride thought she might change him). The marriage lasted 13 years and assured her a place as one of Washington’s reigning hostesses for four decades.

Her final act began in her 60s. She published four books and began an association with Architectural Digest, visiting some of the world’s most interesting homes, including that of Pierre Trudeau.

The great charm of this slender book is that the reader has a comfortable seat at Alsop’s dinner table, with a learned guest on one side describing half a century of defining events while on the other side a deliciously naughty coquette retells the scandals of an era.