Safran's murder stories contain some grain of truth, however elusive it may be 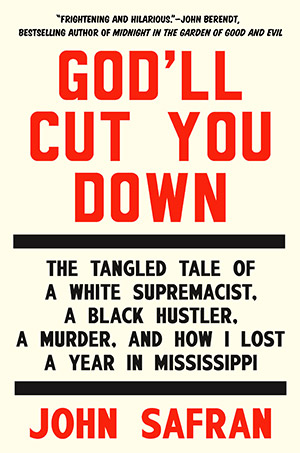 GOD’LL CUT YOU DOWN

A young Australian Jewish documentarian and humourist named John Safran goes to Mississippi in 2008 to set up the ultimate prank: befriend a notorious white supremacist and then, in public, “expose” his secret African-American ancestry. Unlike other extreme situations captured in his Australian TV series, John Safran vs. God—in which he got a fatwa placed on an Australian TV presenter and tried to join the KKK—this one never aired. (Clips of the show are online for anyone to watch.) But when the supremacist in question, Richard Barrett, is found murdered in 2010, and the culprit is a black man, Safran realizes he’s got a much larger story to work with. Especially when the motive keeps shifting from a hate crime to a failed robbery to thwarted sexual advances.

So far, so rote, but God’ll Cut You Down (published in Australia last year as Murder in Mississippi) is only beginning to reveal the many tricks up Safran’s sleeve. For Safran is a true-crime devotee who has read his In Cold Blood and Stranger Beside Me, and keeps circling back to these texts for inspiration and meta-commentary. Occasionally he will address Janet Malcolm, author of The Journalist and the Murderer (which Safran has clearly read multiple times, as he ought) directly: “I know what you think of us true crime writers. Being outsiders to these communities, poking our noses where they’re not wanted, looks bad on paper.” Some may cringe at the technique; I found it hilarious.

Why? Because it’s alternately part of the persona Safran sets up, part of a clipped, jagged style that brings alive the visual senses, something any good documentary filmmaker must accomplish. But it’s also endearing as an approach because it comes as much from Safran’s insecurity about being a clear stranger—a white Jewish man with a funny accent—in this Mississippi town, stumbling when he should be gathering information, taking months to find clues the reader is already privy to, and challenging his own assumptions about what happened. (Repeated conversations with the killer, constantly demanding money from Safran, buttress this.)

What’s so thrilling about God’ll Cut You Down is seeing Safran adapt to Mississippi rhythms and cadences in order to arrive at some truth about the murder of Richard Barrett. And as he shows, the many possible versions of what led to murder contain some grain of truth, however slippery and elusive it may still be.